Five things to know about impeachment

Scope will focus sharply on the Ukrainian allegations 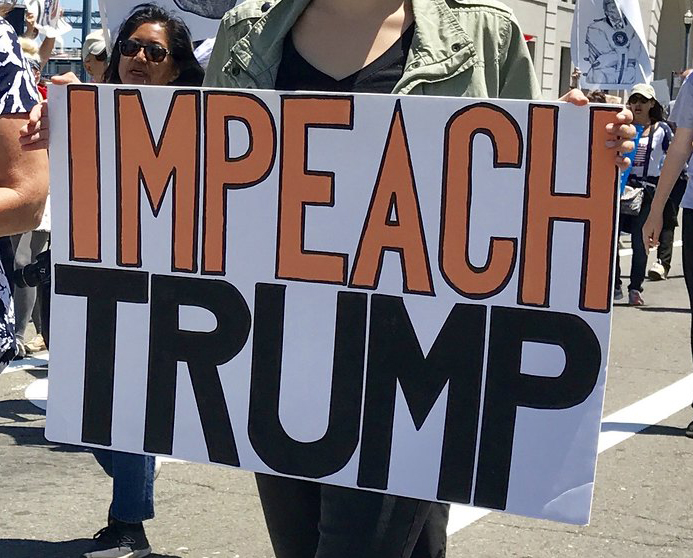 Washington –  Calls for impeachment of the president, once limited to a vocal minority in the U.S. House,  proliferated with the allegation that Donald Trump improperly solicited the help of a foreign leader, Ukraine President Volodymyr Zelensky, to “look into” unsubstantiated allegations of wrongdoing by former Vice President Joe Biden, who is seeking the Democratic Party’s nomination to challenge Trump next year.

Now a majority of the U.S. House, including all five members of Connecticut’s congressional delegation, back a newly initiated impeachment inquiry into the president; and the House is likely to vote to impeach Trump if the probe determines he has committed “treason, bribery, or other high crimes and misdemeanors” that are impeachable offenses.

It’s the constitutionally prescribed method for the legislative branch to remove a president, vice president and “all civil officers” — which has been construed to include judges and members of a president’s cabinet.

The U.S. House has initiated impeachment proceedings more than 60 times and voted to impeach 15 federal judges, one senator, one cabinet secretary and two presidents: Andrew Johnson in 1868 and Bill Clinton in 1998. Richard Nixon resigned the presidency in 1974 when it became clear he would be impeached by the House and convicted by the Senate.

What are grounds for impeachment?

The U.S. Constitution’s standards for impeachment aren’t specific beyond “treason, bribery” and “other high crimes and misdemeanors.” Congress has made it clear that an impeachable offense does not need to be a crime and that impeachable offenses can include abusing the powers of the presidency or misusing the office for improper purpose or gain.

How does impeachment work?

The Senate, now under Republican control, would act as a court to weigh the charges sent over by the House. A team of lawmakers from the House, known as managers, adopt the role of prosecutors. The president has defense lawyers, and the Senate serves as the jury.

If at least two-thirds of the senators find the president guilty, he is removed, and the vice president takes over as president.

Senate rules mandate that when the Senate is notified that House has named impeachment managers, the Senate secretary “shall immediately inform” the House that the Senate is ready to receive them and begin a trial. Senate Majority Leader Mitch McConnell, R-Ky., however, could move to change the rules in order to prevent a trial.

Speaker of the House Nancy Pelosi has directed six House committees to investigate Trump — Judiciary, Intelligence, Foreign Affairs, Oversight, Ways and Means, and Financial Services –under the “umbrella” of a formal impeachment process.

Rep. Jim Himes, D-4th District, sits on both the Intelligence and Financial Services committees. Rep. John Larson, D-1st District, is a member of the Ways and Means Committee.

While there will be multiple investigations, the Judiciary Committee is expected to take a leading role, followed by the Intelligence Committee since the impeachment inquiry was touched off by an intelligence agency whistleblower.

What is the scope of the impeachment inquiry?

The panels involved in the impeachment inquiry have been investigating a slew of allegations against Trump, his campaign, his businesses and his administration since Democrats took control of the House in January. Those probes, which have stalled largely because the White House and Trump businesses have rejected requests for documents, witnesses and other information, are expected to continue.

Pelosi wants to focus her impeachment inquiry on the Ukrainian allegations because they are narrow in scope, easily understood by the public and not complicated to investigate, based on a whistleblower’s complaint that are largely corroborated by the White House’s release of a partial transcript of Trump’s phone call to Zelensky.

“This is the focus of the moment because this is the charge,” Pelosi said.

She said all other allegations against the president, and possible contempt of Congress charges because the White House has blocked information, “will be considered later.”

It’s anybody’s guess how long the process will take, although Democratic leaders say they want to move as quickly as possible to complete the impeachment inquiry.