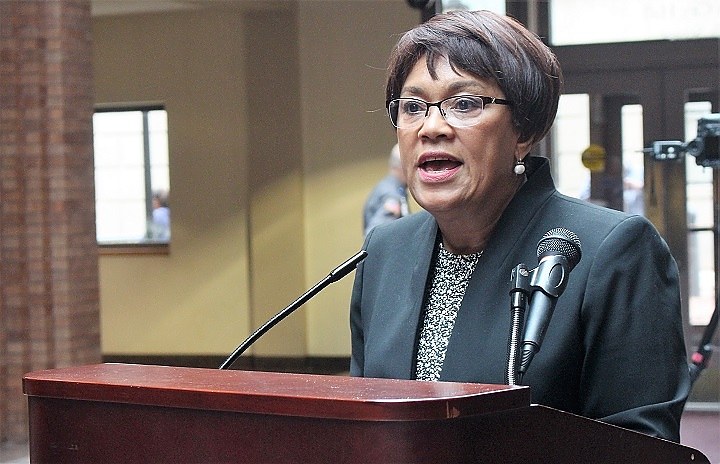 New Haven Mayor Toni Harp has made her long-awaited decision: You can still vote for her in November. But she’s not asking you to.

Harp’s office issued a news release late Wednesday afternoon announcing that she has suspended her reelection campaign. Her 50 Fitch St. campaign office has been cleared out.

However, she has decided to leave her name on the Nov. 5 ballot as the candidate of the Working Families Party. The party endorsed her earlier this year but then announced it would not help her in the general election.

Harp’s decision ends 15 days of soul-searching and rampant rumors about her political future after she lost a Sept. 10 mayoral primary to challenger Elicker by a decisive 58-42 percent. Some supporters pressed Harp to fight on in the Nov. 5 general election . Others gravitated to Elicker’s general election campaign and stayed quiet while awaiting the mayor’s signal.

“I’ve been blessed – and remain grateful – for enthusiastic assistance from thousands and thousands of supporters, contributors, and voters and it’s been my good fortune – literally – to have the opportunity I’ve had to be mayor these past nearly six years,” the release from the mayor’s office quoted Harp as saying. “We’ve worked together to advance this city well beyond where it was six years ago and among so many accomplishments, I’m most proud of the partnerships and collaborations at the heart of them.”

The release said Harp made the decision “despite some inclination – and repeated and passionate pleadings from supporters – to continue.  It stated that she left her name on “so voters have an opportunity to vote for the mayor at that time, but there will be no active effort to seek voter support between now and November 5.”

“On one hand it’s completely counter-intuitive to walk away from all this progress and allow coalitions to be shattered that’ve been irrefutably successful, yet on the other hand there are simply too many practical considerations and obstacles to overcome for my team to effectively campaign for another term,” Harp is quoted as saying.

A spokesman for Gov. Ned Lamont, Max Reiss, confirmed late last week that his boss has been in discussions with Harp about coming to work for his administration.

“No job has been offered to Mayor Harp,” he stated. “The two speak often and the discussion about her future has occurred, but there is no job offer, nor a specific opening that’s been identified. Governor Lamont has a great deal of respect for Toni Harp, a loyal public servant with rich government experience, would could be an asset to the administration.”

“I want to thank Mayor Harp for her many years of public service and commitment to improving the lives of so many New Haveners. She has shown dedication, tenacity and compassion to the people she has served. New Haven is a better place because of her contributions.” Elicker stayed after the announcement.

This story first appeared Sept. 25, 2019, in the New Haven Independent.