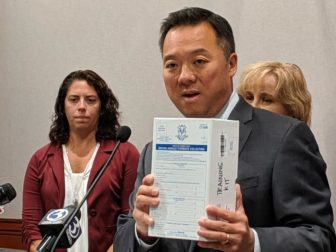 Attorney General William Tong holds up the rape kit used by the state as he discusses the problems with the do-it-yourself rape evidence collection kits. At left, is Fairfield Police Detective Kerry Dalling.

Attorney General William Tong announced Thursday he is investigating whether the manufacturers of do-it-yourself rape kits have falsely represented that evidence collected with the kits is admissible in court.

Tong said he is seeking information from two manufacturers of these kits — the MeToo Kit Company based in Brooklyn and PRESERVEkit in New Jersey — about “representations and implications” that their kits will yield evidence that would be admissible in criminal prosecution.

Tong said that to prosecute a sexual assault case, law enforcement needs to be sure that the evidence is “reliable and admissible.”

“The problem with so-called do-it-yourself rape kits is we don’t know that they’re reliable,” Tong said. “We don’t know that they will be admissible in court, and what’s worse is they may provide victims with a false sense of security about the evidence that they are collecting and it may compromise their ability or law enforcement’s ability to prosecute a case on their behalf.”

In letters to Madison Campbell, chief executive officer of MeToo Kits Company in Brooklyn, and Jane Mason of The Preserve Group in Seaside Park, N.J., Tong wrote that the two companies had “represented that this self-collected evidence” of sexual assault “will be admissible in any subsequent criminal prosecutions or other legal proceedings against the survivor’s assailant.”

Tong asked the companies to “substantiate” their representations that the evidence would be admissible in court.

Asked for comment, Jane Mason of The Preserve Group forwarded a statement that said the company, which makes the PRESERVEkit, never made the assertion that the evidence collected with it would be admitted in court. She noted also that there is never a guarantee that any single item of evidence will be admissible.

“The judge makes the ultimate decision based on the law,” she said, “and there is no law that states victims can’t collect their own evidence.”

Mason, who said she served for 28 years as a special agent for the FBI, also said, “The critics of the PRESERVEkit never state what they are doing to address the needs of the 77 percent of sexual assault survivors who don’t report the crime. Instead of trying to destroy us, why not work with us to help this group of crime victims?”

Campbell forwarded a statement she sent to the New York attorney general saying her company’s product is aimed at the huge percentage of sexual assault victims who are unwilling to go to the hospital or to the police.

Campbell, who said in her statement that she herself was a sexual assault survivor who did not report her rape, said, “We believe survivors have the right to collect evidence of their assault, independent from the traditional legal and health systems.”

She added, “No rape kit — not even the government one — is automatically admissible in court. A judge determines admissibility in each instance, based on the underlying evidence.”

She said the company’s rape kit is under development and has not yet been sold to the public.

But Connecticut law enforcement and advocates for sexual assault survivors expressed opposition to the kits.

Lucy Nolan, director of policy and public relations for the Connecticut Alliance to End Sexual Violence, said that the alliance strongly opposes the sale of do-it-yourself rape kits.

“Connecticut has legal protocols for the use of sexual assault kits which protect the victims of sexual assault,” she said. “These protocols includes qualifications of an examiner, chain of custody for the kit, types of medical information gathered and admissibility of the kits in court.”

Waterbury chief state’s attorney, Maureen Platt said she would like every survivor of sexual assault to know that “right now they can go to any emergency room … and today get a free exam from a certified sexual assault examiner at absolutely no cost to them.”

She said that administering a sexual assault kit “is not a simple matter,” and that the the technical guidelines are continually revised based on the latest scientific and biological data.