Expect no sharp quotes from Lamont on impeachment 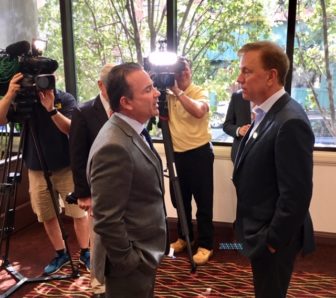 Bridgeport — Gov. Ned Lamont, a Democratic governor who expects to seek federal financing  for a transportation infrastructure plan, is keeping a healthy distance from the question of whether President Donald J. Trump should be impeached.

Lamont responded blandly Monday when asked his thoughts on the recent disclosures of State Department text messages suggesting that the administration dangled a potential White House meeting with the Ukrainian president as an inducement to investigate Joe Biden.

“I think I’ll let the federals take care of that, but I hope they investigate it. You’ve got to put your country first when you’re president,” Lamont said before addressing the Bridgeport Regional Business Council.

Two New England governors, Phil Scott of Vermont and Charlie Baker of Massachusetts, publicly supported the impeachment inquiry 10 days ago, becoming the first Republican chief executives to do so.

New York Gov. Andrew Cuomo, a Democrat, has given mixed signals, supporting the impeachment inquiry and also saying it was the result of leftist pressure on House Speaker Nancy Pelosi and would result in congressional gridlock.

“There is a heightened leftist component of the Democratic Party that she was feeling pressure from,” Cuomo said during a panel discussion on “political civility” hosted by former New Jersey Gov. Chris Christie, a Republican and Trump supporter.

Lamont made clear he will not spend time or political capital on impeachment.

“I’ve got to take care of the state of Connecticut,” he said.

This week or next, Lamont intends to release CT 2030, his second effort at winning legislative support for a transportation infrastructure plan. It will focus on a series of projects that could eliminate transportation choke points in the next decade and includes a tolling proposal downsized from his original plan in February.

“I can tell you I’m talking to the legislative leadership on both sides of the aisle over the course of the next few days or weeks or so, then we’ll roll it out in detail,” Lamont said.

The executive director of the Build America Bureau of the U.S. Department of Transportation briefed lawmakers last month about the potential of below-market federal financing for a significant portion of CT 2030.

Lamont has repeatedly cautioned that federal financing could lessen the need for new transportation revenue, but not eliminate it.

Lamont did not directly answer when asked if his reluctance to talk about impeachment was a strategic decision.

“Look, I’m talking to the federal Department of Transportation down there,” he said. “They are very interested in getting Connecticut on track, to get some low-cost funding to allow us to speed up our transportation system,” Lamont said. “So that’s our first priority right now.”

He had a similar take in April when he declined to join other Democrats in assailing Attorney General William P. Barr’s preemptive characterization of  Robert S. Mueller’s investigation of President Trump.  He said then, “I’m focused on Connecticut.”

Lamont would then tell his business audience of his efforts to work with the Trump administration on low-cost federal financing that could partially finance his plan.

To promote economic growth, he said, Connecticut needs to show it is capably working on fiscal stability, workforce development and better transportation.

3 thoughts on “Expect no sharp quotes from Lamont on impeachment”