This meal, finally, comes with a public hearing 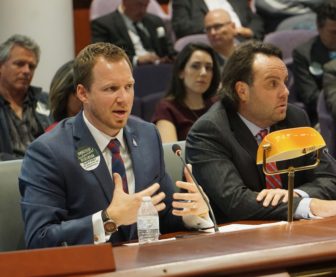 Scott Dolch of the Connecticut Restaurant Association and his lawyer, Ryan O’Donnell.

No one defends how it was done. Language attached to a bill passed unanimously in the last frenzied minutes of the 2019 legislative session would have stripped some restaurant workers of their right to pursue pending lawsuits in wage theft cases.

With Gov. Ned Lamont’s veto of the measure as constitutionally suspect and “patently unfair to workers,” the issue now before the General Assembly is whether the restaurant industry needs clearer rules and relief from class-action lawsuits in wage cases.

This time, legislators are trying to craft the bill in daylight. It is proving more difficult than the version passed without notice, public hearing or debate.

An informational public hearing on proposed compromise language Thursday turned into a wide-ranging and contentious discussion of current law permitting restaurants to pay tipped workers well below the minimum wage and a debate over whether wage theft is “endemic” or the rare act of “bad apples.”

Union representatives and employment lawyers who represent low-wage workers were grateful for Lamont’s veto, but they now criticize the governor for his support of a compromise they see as better than the one vetoed, but still harming restaurant workers by effectively banning them from joining together in class action lawsuits over how wages are calculated.

Richard E. Hayber, a lawyer whose success in convincing a judge that wait staff can collectively sue over wage theft rattled the industry, said in written testimony that before a judge certified one of his class-action cases, restaurants could resolve individual claims cheaply and continue to violate wage and hour laws.

“Now, they might have to repay hundreds of thousands in stolen wages. Now they are paying attention. If we weaken class actions, restaurants will be emboldened to view these laws even more,” Hayber said. “If we pass the governor’s bill, Connecticut will stand alone as the most pro-employer and anti-employee state in the union.” 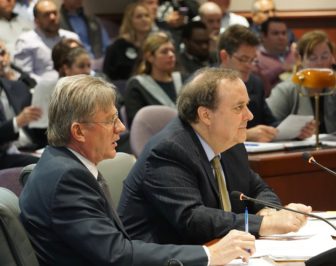 A complication is the conflict between what a key regulation says and how it was enforced by the state Department of Labor. Restaurant owners say some of the businesses being sued relied in good faith on the DOL’s practices and written guidance.

A regulation from 1950 clearly says the time a waiter or waitress spends serving customers and earning tips must be segregated from other tasks, such as cleaning and food prep, that don’t generate tips. The reason is there are two pay scales under state law for service and non-service tasks in restaurants.

Scott Dolch, the director of the Connecticut Restaurant Association, said its national data shows that waiters and waitresses make on average an hourly wage of $25, when tips are included. The federal Bureau of Labor Statistics says reported wages and tips shows the median restaurant pay is $10.47 an hour and $21,780 a year.

Labor Commissioner Kurt Westby and a department lawyer, Stephen C. Lattanzio, testified that the DOL had used its discretion in enforcement actions to be flexible, recognizing the impracticality of having wait staff clock out and clock in when briefly doing non-service tasks.

They followed the 80-20 rule, allowing restaurants to pay the tipped wage if not more than 20 percent of a waiter’s time was devoted to non-service work and was incidental.

Rep. Dave Rutigliano, R-Trumbull, who owns a group of restaurants, said bad actors in the industry who deliberately underpay or schedule wait staff to come in early to do prep tasks below the standard minimum wage should be punished.  But others are facing lawsuits over their failure to document times when wait staff briefly did non-service work.

“At its core, this is about the government and its relationship to its businesses. They wrote a set of rules, a set of rules we all listened to and we all followed,” Rutigliano said. “It turned out those rules weren’t exactly correct. We are all asking for them to write a new set of rules, to help set the table so we can follow it.”

The proposed legislation, which the industry hopes will be taken up by the legislature in special session, would require the Department of Labor to rewrite the 1950 regulation in consultation with restaurant owners and workers.

It also would eliminate double-damage awards against restaurant owners who can demonstrate they acted in good faith. It includes language addressing the conditions under which class actions could be filed in restaurant wage cases, but legislators could not agree if the language would effectively limit them.

He said the DOL’s practice written guidance might have been more precise, but it always has been the case that any restaurant failing to document service and non-service hours does so with the obvious risk of a lawsuit by an employee.

The hearing went all day.

When Hayber’s turn came in early evening, he told lawmakers that the law is clear. He challenged them to Google the rules for gratuities in Connecticut restaurants: It lists specific things covered by the tip credit and eight things that are not.

“This is not rocket science,” Hayber said. “It’s a simple, clear rule.”

Dolch had testified that there are 8,000 restaurants and bars in Connecticut, part of a hospitality industry that employs 155,000.

Rep. Joe Polletta, R-Watertown, told Hayber he was concerned that a class action lawsuit can put restaurants out of business.

One of the restaurants Hayber sued went bankrupt, but Hayber said the $50,000 judgement he won in that case was not the proximate cause.

He said he is not bothered by the possibility he might put someone out of business if they have been systematically defrauding employees. But it’s not in his interest.

Hayber said he currently has a case in which the judgment is hundreds of thousands of dollars.

“They don’t have it. I want to recover,” Hayber said. “We are negotiating right now over collecting it over time.”