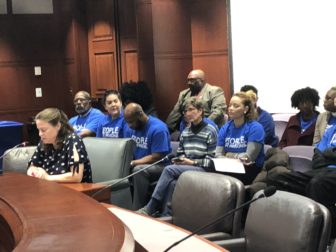 Flanked by a wall of blue shirts that read, “People Not Prisons,” Anderson Curtis delivered a charge to the Criminal Justice Commission Friday afternoon.

“Everyone has a role in ending mass incarceration, including prosecutors and the members of the commission that appoints them,” said Curtis, a field organizer for the ACLU of Connecticut’s Smart Justice campaign, a group of people whose lives have been shaped by the criminal justice system.

Curtis delivered his remarks at a forum at the Legislative Office Building. It was the first time the public had a chance to play a role in the Criminal Justice Commission’s appointment of the chief state’s attorney, thanks to a new law designed to make the selection of prosecutors more transparent.

The commission is looking to replace Kevin Kane, the longest-serving chief state’s attorney since the position was created in 1973. The job is very powerful. The chief state’s attorney provides coordination and support to Connecticut’s 13 state’s attorneys, oversees the Division of Criminal Justice’s administrative responsibilities and plays a big role in crafting the state’s criminal justice policies.

The opening comes at a time when prosecutors are seen as the key to cutting down on prison populations and diverting people to rehabilitative services that address root causes of crime.

Advocates view the vacancy as an opportunity for the commission to appoint a top prosecutor committed to furthering Connecticut’s criminal justice reforms and reducing the system’s racial disparities. According to the U.S. Commission on Civil Rights, just five states have higher rates than Connecticut of disproportionately imprisoning black adults, and just six states more disproportionately imprison Latinos.

Chief State’s Attorney Kevin Kane will retire at the end of the month.

“It is important that the next chief state’s attorney be someone who understands the issues facing people of color in the criminal justice system,” said Aigne Goldsby, from the George Crawford Black Bar Association. “Our next CSA should be someone who cares about diversity, equity and inclusion, and fostering engagement within the black community.”

Also important are the chief state’s attorneys’ powers as they relate to juvenile justice. Abby Anderson, the executive director of the Connecticut Juvenile Justice Alliance, a group that works to end the criminalization of children, said that authority includes determining which children are charged, the crimes they’re charged with, whether their cases are transferred to the adult system and which children are offered access to diversionary programs.

“Our ideal chief state’s attorney will regard court involvement as the last possible option, especially for children,” Anderson said. “Our ideal chief state’s attorney will believe that it is not appropriate for young children to ever become involved with the police and the courts, and instead will understand that young children need support, services, and interventions to meet the underlying needs of their families and communities.”

No prosecutors or police chiefs in favor of more aggressive measures offered public testimony. One speaker in favor of victims’ rights, Michelle Lettieri, talked about a 1993 car crash in which her mother was killed by an underage driver. Lettieri, the director of Victims Services for MADD Connecticut, said a state’s attorney helped her family navigate the ensuing criminal procedures. Lettieri did not want to see the driver get locked up .

Several speakers also called for the next chief state’s attorney to create a conviction integrity unit, introduce legislation to treat addiction as an illness and not a crime, reform the state’s cash bail system, establish independent, citizen-led police review boards that have subpoena power, and make a set of uniform standards and guidelines that apply to all 13 of Connecticut’s judicial districts.

“Fair treatment under the law should not depend on someone’s zip code,” Curtis said. “Yet, currently two people could face wildly different charges, plea offers and diversionary programs based on their judicial district.”

Absent from the forum was Gov. Ned Lamont. His director of communications, Max Reiss, said the governor will not be submitting written testimony to the Criminal Justice Commission.

“Our state constitution and statutes vest in the Commission the important responsibility for appointing the next Chief State’s Attorney. Understanding the importance of that responsibility, the Governor has appointed a strong and diverse group of individuals to the Commission,” Reiss said in a statement. “He is extremely proud of those appointments, is confident they share his vision for the fair and impartial administration of criminal justice in this state and therefore has no doubt they will select a qualified individual to succeed Chief State’s Attorney Kane. He also is pleased that they have decided to seek public input as they begin that important process.”

Lamont nominated Reginald Dwayne Betts to the commission last March. The addition of Betts, who spent eight years in prison before graduating from Yale Law School and becoming an esteemed poet, was seen by reformers as a step forward for criminal justice, as it added the perspective of the formerly incarcerated to the state agency in charge of appointing prosecutors.

As Curtis said in his testimony, “Connecticut must listen to directly impacted people, many of whom could not be here today, if our state is to chart a new course.”

Those who missed the input session but are still interested in making their voice heard can submit public comments when candidates are interviewed for the position. Such interviews will also be open to the public.