Retailer fails to get answer from Lamont on youth wage 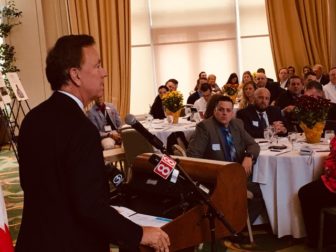 Standing before the Connecticut Retail Merchants Association, Gov. Ned Lamont declined to substantively engage Wednesday on a significant issue to retailers: The inability to pay teens a sub-minimum wage for more than 90 days.

Karen Munson, the president of Munson’s Chocolates, asked Lamont to explain what he thought about a youth wage as he shaped the final version of a law that raised the the minimum wage from $10.10 to $11 on Oct. 1 and requires four increases until reaching $15 in 2023.

“Why did you decide against having a youth wage that allows employers to pay anyone under 18 a lower rate, not just for 90 days?” Munson asked. “Do you see paying teenagers who have never been in the workforce up to $15 an hour as a deterrent for an employer to hire, train and mentor young people?”

Lamont first joked that he would be giving out a lot of candy at the Executive Residence on Halloween, and he would be happy to serve Munson’s. “So, if you have any chocolates we’d love to help showcase a great Connecticut product.”

“We do have a sub-minimum wage, is my understanding,” Lamont said.

In fact, Lamont is responsible for it still being on the books, a fact he never mentioned Wednesday. The co-chairs of the legislature’s Labor and Public Employees Committee wanted it repealed, but Lamont refused to sign a minimum-wage increase unless a training wage remained in some form.

The issue raised by Munson is hardly a new one, or even unique to Connecticut. President Ronald Reagan tried several times to pass a federal minimum wage law allowing a lower minimum for workers up to age 19. A version offered in 1985 would have allowed $2.50 an hour for workers 16 to 19 years of age, instead of the $3.35 hourly minimum then.

And the idea came up in the 2019 minimum wage debate in Connecticut.

That conversation went something like this: Does a training wage for young workers provide valuable first experiences in the workforce that would be unavailable at the standard minimum? Or is it an incentive for fast-food restaurants and others to discriminate against older workers and exploit young ones?

Connecticut’s law is a provision demanded by Lamont and favored by business: a sub-minimum training wage for workers ages 16 and 17, who can be paid 85 percent of the state minimum for up to 90 days (the limit had been 200 hours).

Lamont tried to and failed to lower the training wage to 75%. He didn’t recount that debate Wednesday, however, or explain why he ultimately settled for the final version.

“Thank you for the opportunity you give to those young people,” Lamont said. “I will make sure that somebody on my team gets back to you with the specifics of what our sub-minimum wage is.”

It was the only question posed by a retailer, and Munson was less than satisfied.

“I’m not sure if he really answered my question,” she said.