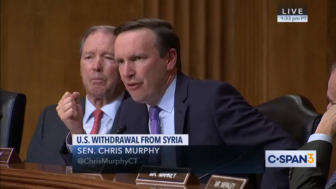 During an often testy hearing before the Senate Foreign Relations Committee, James Jeffrey, special envoy for Syria engagement, said the presence of U.S. troops would not have stopped  Turkey from invading Syria.

“You don’t think our forces were a deterrent?” Murphy asked incredulously.

“I think our soldiers on the ground were led to believe something fundamentally different,” Murphy responded.

Soon after Trump phoned President Recep Tayyip Erdogan of Turkey on Oct. 6 with his plans to withdraw U.S. forces, Turkish troops invaded Syria, killing Kurds that had allied themselves with the United States in a fight against ISIS and setting off a flood of refugees from that country into neighboring Iraq. Turkish forces have also established “safe zone” in the northern part of the country.

Jeffrey defended Trump’s decision, saying “nobody in the (Trump) administration green lighted” the invasion and that an invasion of Turkey’s neighbor was “inevitable.”

Murphy questioned this assertion, and said Trump has defended Turkey’s actions and even said  in a tweet that the new violence in Syria was “like two kids in a lot, you’ve got to let them fight.”

“How is the world not going to interpret those actions as a clear green light?” Murphy asked.

Jeffrey conceded “the president did say those things,” but said Trump has also said other things, including “we will crush the (Turkish) economy.”

A majority of the members of the foreign relations panel were not convinced by Jeffrey’s testimony and called the president’s actions “rash,” and “chaotic,” a betrayal of Kurdish allies, and counter to U.S. interests in the region.

Sen. Mitt Romney, R-Utah, asked Jeffrey if a planned, “negotiated” withdrawal would not have been wiser.

“It’s given us a terrible black eye around the world,” Romney said of the U.S. abandonment of the Kurds..

Sen. Ben Cardin, D-Md., pushed back on Jeffrey’s assertion that Turkey would have still invaded Syria if U.S troops had remained. 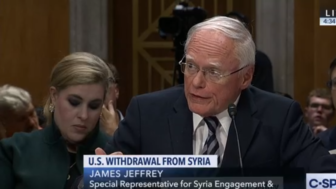 James Jeffrey, the special envoy to Syria, was grilled by both Democrats and Republicans on the president’s decision to withdraw troops from Syria.

As the hearing was taking place Tuesday afternoon, Russia and Turkey announced an agreement that would establish joint Russian and Turkish patrols along much of the Turkish and Syrian border.

“This agreement locks in Erdogan’s land grab in Syria and opens the door for further violence against the Syrian people,” Murphy said in a statement. “Not only did Trump green light Erdogan’s invasion and betray our former Kurdish allies, his decisions have made Putin the kingmaker in determining the future of Syria.”

Sen. Jim Risch of Idaho, the Republican chairman of the Foreign Relations Committee, said sanctions must be imposed on Turkey if it continues its offensive against Kurdish fighters in northeastern Syria.

Murphy, however, has warned that sanctions should be targeted to dissuade Turkey from what he called “war crimes” and not constitute the only U.S. response to Turkey’s behavior.

“Sanctions to simply punish them for actions that the President of the United States invited them to take makes no strategic sense,” Murphy said.

Jeffrey will testify Wednesday before the House Foreign Affairs Committee in a hearing titled “The Betrayal of our Syrian Kurdish Partners: How Will American Foreign Policy and Leadership Recover?”