Nardini on way to Senate confirmation to appeals court 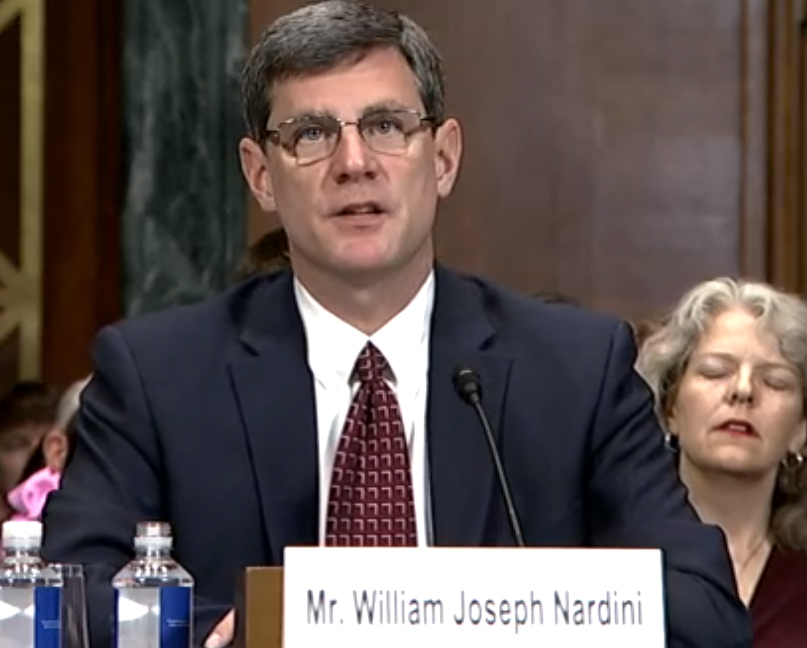 William Nardini at his Sept. 25 confirmation hearing before the Senate Judiciary Committee.

Washington – Federal prosecutor William Nardini on Thursday moved closer to filling a Connecticut seat on the U.S. Court of Appeals for the Second Circuit as the Senate Judiciary Committee cast a lopsided, bipartisan vote in favor of his nomination.

The 19-3 vote came after the top Democrat on the committee, Sen. Dianne Feinstein, D-Calif., who has opposed many Trump judicial nominees, praised Nardini as a “dedicated public servant.”

Nardini, a 19-year veteran of the U.S. Attorney’s Office in Connecticut, was nominated for a Second Circuit seat by President Donald Trump in August.

“He received his blue slips from both Connecticut senators,” said Feinstein. “To me that means that the two senators obviously had some knowledge or were involved in his selection.”

A blue slip is the name for a piece of paper a home state senator returns to the chair of the Senate Judiciary Committee to show his or her approval of a federal judicial nominee.

Blumenthal also praised the nominee. “I believe he has a distinguished record and history of public service and would be a good addition to the court,” Blumenthal said.

The only three members of the Senate Judiciary Committee to vote against Nardini’s nomination were Sens. Amy Klobuchar, D-Minn., Cory Booker, D-N.J., and Kamala Harris, D-Calif., all of whom are running to unseat Trump and as a matter of principle are opposing all of his judicial nominees. 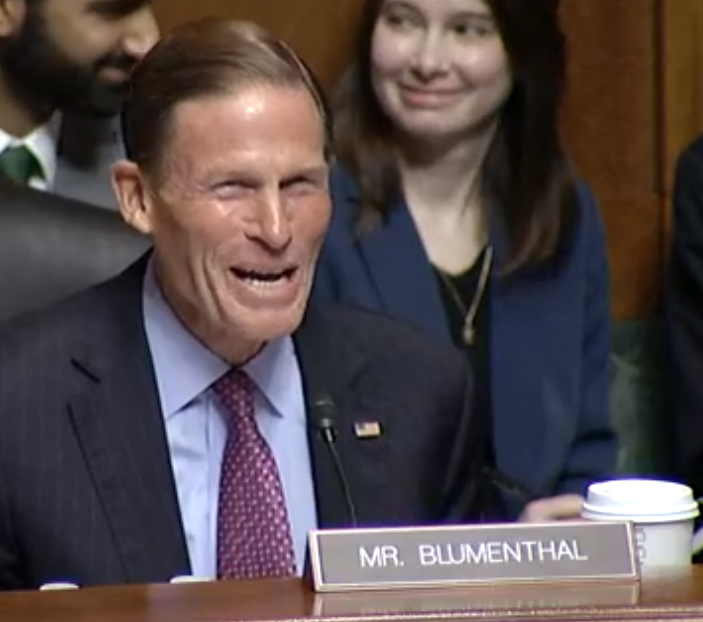 A full Senate vote on Nardini’s confirmation could come as early as next week.

At Nardini’s confirmation hearing last month, Blumenthal asked him which of these judges had made the most significant impact on him. Nardini declined to answer, saying making that choice would be the equivalent of picking a favorite parent.

“I do think that all of them taught the importance of keeping an open mind,” Nardini said.

A Fulbright Scholar in Italy in 1998, Nardini earned his law degree from Yale Law School and was executive editor of the Yale Law Journal. If confirmed, he would be taking the seat of retiring Judge Christopher Droney.

University of  Richmond  law professor Carl Tobias, an expert on federal courts, said Nardini is a conservative, but one with a “record that is respectable.”

“He is well qualified,” Tobias said.

While Nardini appears to be on his way to swift, bipartisan confirmation, Menashi’s candidacy is controversial.

The Senate Judiciary Committee had scheduled a vote on Menashi’s nomination Thursday, but postponed consideration of the nominee and several others because of the need to attend a ceremony for Rep. Elijah Cummings, D-Md., who died earlier this week and whose body was lying in state in the U.S. Capitol.

“They knew debate over these nominees would take some time,” Tobias said.

The confirmation of Nardini and Menashi  would tilt the balance of the Second Circuit Court of Appeals, which hears appeals from Connecticut, New York and Vermont, from a majority of Democratic appointees to a majority of Republican appointees.

But Menashi’s confirmation is not assured.

He has been serving as a legal aide in the White House, and provided input on the controversial family separation policy for immigrants at the Southern border. And at  his confirmation hearing last month, Menashi angered many Republicans and Democrats by refusing to answer questions about his work.

Democrats on the panel, including Blumenthal, have pressed Menashi on what he knew about Trump’s request of  Ukrainian President Volodymyr Zelensky to investigate former Vice President Joe Biden.

“I oppose the nomination of Steven Menashi to be a United States Circuit Court Judge for the Second Circuit,” Collins said in a statement. “Mr. Menashi’s past writings, particularly about women, LGBTQ advocates, and diversity, raise questions about whether he has the appropriate judicial temperament.”

With Congress embroiled in a deepening partisan rancor over the House impeachment inquiry of Trump and little legislation under consideration in the Senate, Senate Majoirty Leader Mitch McConnell has focused on using the Republican majority in his chamber –  and eased  filibuster rules on confirmation votes  – to move Trump’s candidates for federal agencies and the federal bench.

The Senate has confirmed 158 judges since Trump became president, 73 of them this year.