DMHAS not candid with Whiting advisory board about abuse scandal, chairman says 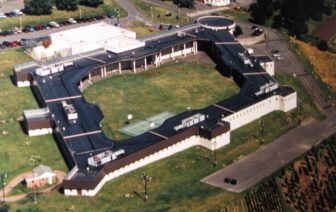 The Whiting Forensic Hospital Advisory Board learned of the 2017 patient abuse scandal at the hospital from a reporter, not the Department of Mental Health and Addiction Services, the board’s chairman testified Wednesday afternoon.

Wynne said Whiting administrators did not tell the board about the abuse, that many staffers had been suspended or that the federal Department of Health and Human Services had been conducting an investigation. DMHAS then told advisory board members they could not have a copy of the report, citing health privacy concerns, and said they should submit a Freedom of Information request to the state Department of Health.

“I find it troubling that you have to FOIA the reports of the institution that you’re supposed to be advising,” said Linda Schwartz, co-chairwoman of the task force.

Lawmakers approved the creation of the task force after Whiting employees were seen on surveillance tape kicking, hitting and tormenting patient William Shehadi two years ago. Prosecutors said a supervisory nurse and forensic treatment specialists tormented Shehadi by throwing liquid in his face, gyrating on him, and throwing him to the floor.

The supervisory nurse was later sentenced to five years in prison, while nine other staffers were criminally charged with cruelty. Thirty-seven employees at Whiting were placed on administrative leave because of the abuse. According to state officials, all but one has since been “separated from state service.”

Many of the patients at Whiting Forensic, a 91-bed maximum security hospital, have been acquitted of crimes by reason of insanity. Others are sent there by the court to be “restored to competency” after being charged with crimes.

The abuse scandal led to a series of legislative actions, including the creation of the task force, which is considering a slew of reforms at Whiting that include potentially closing the outdated facility.

One of the task force’s other responsibilities is to evaluate the advisory board’s membership. That board was created by state statute, and has existed since before Whiting was created. Members, who are appointed by the governor, are charged with advising DMHAS on problems at Whiting and matters there related to the department’s work.

The five-member board makes suggestions in response to the information provided to them, said Eugene Hickey a social worker and board member. Historically, that has involved advising the hospital on how to deal with patient falls and transferring patients from one unit to another.

“Frankly, nothing very substantive,” Hickey said. “When we have given advice, it’s tended to be not at the patient level, and not at the broadest social policy level. It’s been making recommendations and responses to some of the reports that we’ve been given, and raising some questions the administration might want to consider.”

Wynne said the state statute under which the board was created prevented members from taking action once they found out about the abuse.

“We had no ability to act,” Wynne said. “I think the biggest problem that we had was that if we were to give any sort of advice, we’d like to be informed. And we were never informed.”

Wynne said the board was never consulted about the separation of Connecticut Valley Hospital and Whiting Forensic, or about who should be named the head of Whiting. That did change, he noted, with the selection of Hal Smith as CEO, when the board was invited to participate in the interview process.

“For the board, we have reflected upon our past interactions with the department and have come to believe that the department has not been candid with us,” said Wynne.

The board’s authority is independent of DMHAS’ chain of command,” noted Michael P. Lawlor, the task force’s co-chairman and associate professor at the University of New Haven.

“I think you should have the explicit authority to dive in when these kinds of things happen,” Lawlor said. “And if an individual wants to not answer a question because of pending litigation, that’s one thing, but I think you asking questions, taking down and looking at actual documentation are all the kinds of things you should have the explicit authority to do, in these circumstances.”

Wynne and Hickey said conditions have improved under Smith’s tenure, which began in June 2018. But the board could still use more power, enshrined in statute, that gives them more of a voice in the formulation of hospital policy.

The task force could help with that. They could recommend that lawmakers give the board more discretion and power as an oversight committee.

“We’re all in kind of a mode to see what we can do to strengthen your role at Whiting because you have a very pivotal point, which could in the future be a way to get a handle on this before any damage or problems occur,” Schwartz said. “You need the tools, and you need the power and the authority.”