Open enrollment begins today. Here’s what you need to know. 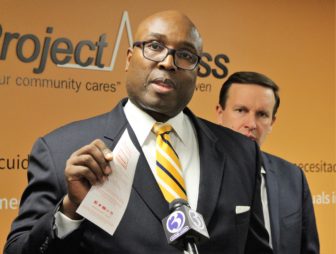 James Michel, the head of Access Health CT, has said he is concerned about the segment of Connecticut’s population that remains uninsured.

Open enrollment for 2020 health plans on Connecticut’s insurance exchange is now underway. It’s the seventh enrollment period for the state’s marketplace, and despite a recent drop in the number of uninsured people, health officials are still trying to reach the nearly 187,000 residents who lack coverage.

Employees at Access Health CT, Connecticut’s exchange, have planned a series of fairs, community meetings and other strategies for getting the word out and fielding questions about the enrollment process. Hartford residents may have seen Access Health representatives in their neighborhoods last month, knocking on doors and talking to people about their options. The workers also will visit Bridgeport, Fairfield and Norwalk in the coming weeks.

Customers have 45 days to sign up for plans. Here are some common questions about open enrollment:

The open enrollment period for 2020 health plans on the exchange begins today (Nov. 1) and runs through Dec. 15. The coverage will go into effect on Jan. 1.

Who is on the exchange?

Are premiums going up or down next year?

Consumers who are ineligible for subsidies and are enrolled in gold-level plans will see an average increase of $116 in their monthly premiums. Those enrolled in silver-level plans will face an average hike of $66 per month, and those with bronze policies will see an average $59 monthly increase, according to a report prepared by the actuarial firm Wakely. The report did not take into account co-payments, deductibles and other expenses borne by the consumer.

Did the state approve rate hikes?

Yes. In July, Anthem asked for a 15.2% average increase on individual plans that cover about 27,300 people. The state insurance department approved a 6.5% hike for those policies.

ConnectiCare requested a 4.9% increase on individual plans that cover about 75,600 people. The insurance department signed off on a 2% average increase. 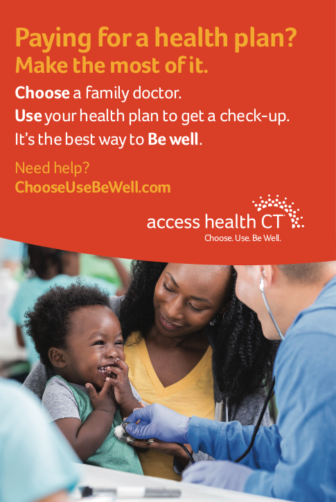 A flyer left at homes in Hartford as part of Access Health’s door-knocking effort to get the word out about open enrollment.

The carriers have cited several reasons for seeking the rate hikes, including rising medical costs, an aging insured population and the return of a federal tax.

The exchange has organized 30 enrollment fairs across the state through Dec. 15. A list of locations and times can be found here. The first is scheduled for Saturday at the Ferguson Library in Stamford (1 Public Library Plaza), from 10 am to 1 pm. The next is Monday at Illing Middle School in Manchester (227 Middle Turnpike East), from 5 to 8 pm.

Exchange officials ask that residents have the following information and documents handy when signing up: Date of birth; social security number; visa, green card or immigration documents; the most recent W-2 and/or IRS Form 1040 and Form 1099; pay stubs, profit and loss statements or other employment verification; and current insurance coverage (if applicable).

People whose income falls below a certain mark (400 percent of the poverty level) can get a discount on their premiums if they buy coverage through the exchange. The discount comes in the form of a federal tax credit, paid either in advance to the insurance company to supplement the customer’s premiums, or when the person files taxes for the year.

Only in certain circumstances. Some people can sign up during a special enrollment period if they’ve had a qualifying life event such as a move, getting married, having a baby, adopting a child or losing health coverage.

People who qualify for Medicaid, known as HUSKY in Connecticut, can sign up at any time during the year.

One thought on “Open enrollment begins today. Here’s what you need to know.”