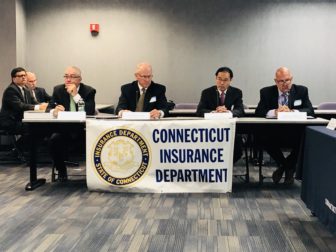 Insurance officials attended a public hearing this month on the proposed rate hikes.

State officials said Friday that they have approved smaller rate hikes than those originally sought by carriers for policies on Connecticut’s health insurance exchange.

Anthem Health Plans asked for a 15.2% average increase on individual plans that cover about 27,300 people. The state insurance department approved a 6.5% hike for those policies next year, it said Friday.

ConnectiCare Benefits Inc., which serves many state residents who seek policies through the exchange, requested a 4.9% increase on individual plans. There are about 75,600 people covered under those policies.

The insurance department instead signed off on a 2% average increase.

“Through the hard work of the department’s actuaries and professional staff, the department was able to reduce the health insurance rate increase requests for Connecticut consumers,” Insurance Commissioner Andrew Mais said in a statement. “However, there is still work to be done. I will continue to work collaboratively with all stakeholders in Connecticut’s health care system to find ways to achieve meaningful savings while continuing to promote access to some of the best health care services in the nation.”

The carriers have cited several reasons for seeking the rate hikes, including rising medical costs, an aging insured population and the return of a federal tax.

The chief actuary for ConnectiCare said earlier this month that its request was driven by a higher unit cost (the amount a health provider charges for a service), the increased use of services such as outpatient procedures, chemotherapy and radiation, and higher pharmacy expenditures.

An executive for Anthem pointed to a shrinking number of participants on the individual market and a corresponding increase in the population’s morbidity.

The insurers also said the reintroduction of the federal Health Insurance Tax, or HIT, in 2020 prompted them to seek an increase in rates. The tax – implemented by the Affordable Care Act – was in place for 2018, suspended in 2019, and is due to take effect again next year.

Lawmakers, health care advocates and customers pushed back at a Sept. 4 public hearing on the proposed rate hikes.

“What we’re not taking into account is the fact that this is like compound interest in the old bank account. Every year we have an increase. Every year that increase is then piled upon by the next year’s increase. And that happens over and over again,” Rep. Tom Delnicki, R-South Windsor, told state insurance regulators. “It’s not sustainable.”

Anthem Health Plans had also filed a request for an average increase of 14.8% on small group health plans for employers with 50 or fewer workers. The proposed rates are for policies marketed both on and off the exchange and provide coverage for about 44,100 employees and their dependents.

ConnectiCare sought a 4.8% average hike for small group plans marketed through the exchange.