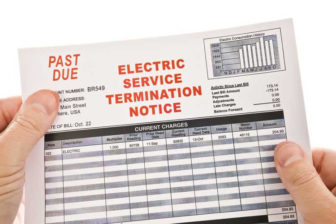 Concerns about a rise in utility shut-offs in Connecticut led to a hearing Friday before the Public Utilities Regulatory Authority.

The number of Eversource customers disconnected for nonpayment has doubled in the past four years. In 2018, the company shut off power 80,700 times.

Those numbers were the backdrop to a hearing Friday before the Public Utilities Regulatory Authority in Hartford.

Consumer advocates want to know why shut-off numbers are soaring and why some of those who are disconnected are known by the utility companies as hardship cases.

Meanwhile, both Eversource and United Illuminating sent executives to defend their record on reaching out to customers in need and to say the companies stand ready to help address the so-called affordability gap.

A 2017 report commissioned by Operation Fuel said about 320,000 households in the state struggle to bridge the gap between what they can afford and what appears on their utility bills, to the tune of $450 million. That’s an average of $1,400 per affected household.

The federal LIHEAP program is supposed to address that gap, and it is the primary source of residential home energy assistance in Connecticut.

“Those dollars are not cutting it, they just aren’t,” said Taren O’Connor from the Office of Consumer Counsel. “They’re serving a certain portion, but there are a lot of other people in Connecticut who are in need.”

She said affordability is front and center for her office, which is the utility consumer watchdog in the state. One issue is that not everyone knows that help is available from the utility companies themselves, in the form of payment plans and debt forgiveness.

“This issue is at the forefront of the work that we do every day. It can be a struggle, it can be frustrating, to be quite honest,” she said of spreading awareness of consumer hardship programs. “We have a lot of tough conversations around the low-income programs. How can we be doing better?”

But other advocates took a more cynical view on why there’s low uptake for hardship programs in the state.

“The companies have articulated that they are absolutely not going to advertise those programs,” said Bonnie Roswig of the Center for Children’s Advocacy.

She said “coding” customers for hardship should mean that people pay no more than $75 a month on their electric bills and that they cannot be shut off. But it’s often not the first option offered when a customer contacts the company.

“We have to do a better job — people just don’t know about it,” she said, urging the regulators to hold companies accountable to train their call center staff to better address the issue.

Roswig spoke of her clients who often will go a whole summer without lights, refrigeration or air conditioning simply to save money to pay their arrears and get reconnected as the cold weather returns.

“People are without lights and without heat for many, many months of the year,” she said, noting that this impacts other issues, like food insecurity, success in school for children and keeping a roof over one’s  head. “If you don’t have utilities, you can be evicted from where you live.”

Connecticut has some of the highest electric rates in the country, on a cent-per-kilowatt-hour basis. But United Illuminating’s Chuck Goodwin told those at the hearing he doesn’t believe that’s the whole story.

“We are a relatively wealthy state, and so when you look at the affordability of electricity from a more broad perspective, we fall closer to the middle of the pack,” he said.

He did acknowledge that affordability is an important social issue and that the gap between rich and poor in the state continues to widen.

“We believe we need to avoid inefficient solutions that drive up cost to all customers, so we have to have a cost benefit analysis to this,” he explained. “We need to avoid relying on programs that address the burden on LMI [low- and middle-income] customers by shifting costs to all other customers and increasing rates to the non-LMI population.”

She denied the charge that such programs remain hidden or hard to access.

“Reaching our customers with energy assistance information is important,” Cain said. “Beyond just those who tell us their hardship, we have to find those we don’t know about yet.”

She said Eversource advertises its programs via bill inserts, as well as ads in public spaces, particularly in towns with the highest arrears.

This informational hearing in front of new PURA chair Marissa Paslick Gillett did not result in formalized recommendations, but all sides acknowledged the importance of airing the issue in all its complexity.

“Thank you for this — this is the conversation that needs to start happening,” said OCC’s O’Connor.