Will there be a Trump factor today in Connecticut? 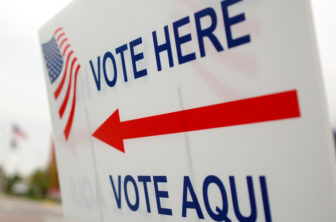 Today’s municipal elections feature unusual bids for redemption by losers of Democratic primaries in two of the state’s largest cities, as Marilyn Moore attempts a write-in campaign to unseat Joseph P. Ganim in Bridgeport and Mayor Toni N. Harp continues as a third-party candidate following her decisive loss to Justin Elicker in September.

But to a large degree, these are intra-party diversions for Democrats who would like to see early evidence of the extent to which President Donald J. Trump remains a galvanizing force in blue Connecticut, where Democrats made solid gains in the 2017 municipal and 2018 state elections.

U.S. Sen. Chris Murphy, a Democrat who led a get-out-the-vote effort last year that benefited his re-election and helped the party make its first state legislative gains in a decade, said he anticipates a lower turnout today than in the previous municipal cycle of 2017.

“The fall of 2017 was the apex of Connecticut’s resistance against the Trump agenda. I think some of that energy naturally dissipated,” Murphy said. “That being said, when I go around to these Democratic picnics, there aren’t fewer people. My town halls are still bonkers. We just did one in Bloomfield with two days notice that was standing room.”

Democrats say the women who helped fuel the party’s gains in 2017 and 2018 are playing active roles this year behind the scenes and on the ballot. At least half the Democratic nominees are women in 67 cities and towns, with a slate in the Hartford suburb of Vernon that is three-quarters female and led by Claire Janowski, a former lawmaker running for mayor.

“The fall of 2017 was the apex of Connecticut’s resistance against the Trump agenda. I think some of that energy naturally dissipated. That being said, when I go around to these Democratic picnics, there aren’t fewer people. My town halls are still bonkers.”

“Democrats realize that inclusion and diversity is really important to the success of our party,” Lt Gov. Susan Bysiewicz said. “People are excited about the municipal elections because they know every door they knock on, every person they talk to, is one person closer to replacing our president. And people are very excited about that.”

J.R. Romano, the Republican state chair, said he sees today’s races as driven by local issues, though some Republicans are introducing a statewide issue — tolls — into local contests. Trump is featured in some Democratic advertising and one dirty trick — forged lawn signs that make it appear the Republican nominee for first selectman in Greenwich is allied with Trump.

Romano conceded that two years ago Trump helped the Democrats organize and flip control of about a dozen communities — and give Republican incumbents close calls in GOP strongholds like Greenwich and New Canaan. Democrats won state House and Senate races in Greenwich last year, and they see an opportunity this year with an open seat for first selectman.

“I think two years ago, it was definitely, the Democrat base was more energized than this cycle,” Romano said.

“I think two years ago, it was definitely, the Democrat base was more energized than this cycle.”

In Middletown, Republicans are trying to capitalize on an open seat and a Democratic Party that may still be wounded by a four-way primary for mayor that was won by 27-year-old Ben Florsheim, a Murphy staffer. Republicans nominated a former mayor, Sebastian Giuliano.

An ad placed on Facebook by local Democrats tries to equate Giuliano with Trump. Republicans countered by calling Florsheim a trust-fund candidate. 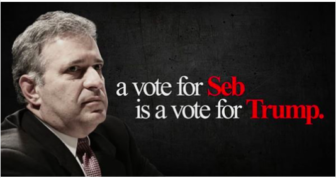 One of the Democratic ads employing the specter of Trump. This is from Middletown Democrats.

In Fairfield, state Rep. Brenda Kupchick is steering clear of statewide issues in a challenge to Democratic First Selectman Mike Tetreau, whose administration has been roiled by the arrest of a public works official, who is accused of accepting bribes to allow a contractor to dump contaminated fill.

Kupchick is one of least five state lawmakers on local ballots this year. Rep. Fred Camillo, R-Greenwich, also is running for first selectman in his town, and there are three state senators who are simultaneously serving as first selectman or mayor.

Two of the losing candidates in the Republican primary for lieutenant governor last year, First Selectman Jayme Stevenson of Darien and Mayor Erin Stewart of New Britain, are seeking re-election.

In Danbury, Mayor Mark Boughton, a Republican, is seeking re-election to a 10th two-year term after running three times for governor. He is challenged by Democrat Christopher C. Setaro.

Shelton Mayor Mark Lauretti, another repeat GOP gubernatorial candidate, also is up for re-election, seeking his 15th term. He is opposed by Democrat John Harmon.

Hartford Mayor Luke Bronin, a Democrat who explored a run for governor, easily won a Democratic primary in September and now faces five opponents, including former Mayor Eddie A. Perez. He lost the primary and got on today’s ballot by petitioning.