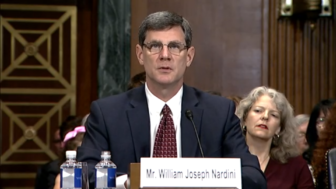 William Nardini at his Sept. 25 confirmation hearing before the Senate Judiciary Committee.

Washington – The U.S. Senate on Thursday overwhelmingly voted to confirm William Nardini, a 19-year veteran of the U.S. Attorney’s Office in Connecticut, to a seat on the New York-based Second Circuit Court of Appeals.

Nardini, who was nominated for a seat on the appeals court by President Donald Trump in August, was confirmed on a bipartisan, 86-2 vote. Only Sens. Kirsten Gillibrand, D-N.Y., and Ed Markey, D-Mass., vote against the nominee.

“It was one of the strongest votes for an appellate court nominee,” said University of Richmond law professor Carl Tobias, an expert on the federal courts. “That’s the way to do nominees.”

As a judge on the Second Circuit, Nardini will hear appeals from Connecticut, New York and Vermont. Although Nardini’s candidacy was supported by his home state Democratic senators, Richard Blumenthal and Chris Murphy, and most Senate Democrats, he will alter the partisan composition of the court in one way.

The Second Circuit has 13 active judgeships. Of the judges on the bench, three were appointed by Bill Clinton, two by George W. Bush, three by Barack Obama, and — with Nardini’s confirmation — four by Donald Trump.

This means the court, which once had a majority of Democratic nominees, is now split evenly between nominees of both parties.

There is still one vacancy on the court, which Trump has nominated a controversial candidate to fill — Steven Menashi, a 40-year-old White House legal aide.

Menashi, who would fill a New York vacancy on the appeals court, is opposed by his home state’s Democratic senators.

“His record of extreme views is well documented,” said Sen. Charles Schumer, D-N.Y. “One of the lawyers behind (Education Secretary) Betsy DeVos’s anti-student agenda, he supported her efforts to bilk student borrowers. He worked hand-in-hand with Steven Miller at the White House on policies that harm immigrants. His past writings show scorn for LGBTQ Americans and women.”

“Bill Nardini is a highly respected member of Connecticut’s legal community and a devoted public servant,” said Blumenthal and Murphy in a joint statement. “After thoroughly reviewing his record and carefully considering his testimony before the Senator Judiciary Committee, we believe Bill Nardini will bring significant knowledge and expertise to the court.”

The issue of Trump’s judicial nominees came to the fore in Congress after the president on Wednesday celebrated the speed with which the Senate was confirming his choices for the federal bench.

“My administration and Republicans in Congress have now confirmed more than 150 federal judges,” the president said in an East Room address attended by Senate Majority Leader Mitch McConnell. “And, to be honest with you, it’s substantially higher right now than that, Mitch. It’s about 159. And we should have, within the next short period of time — like two months — we should have about 182 federal judges. How’s that? Good? Good?”

A Fulbright Scholar in Italy in 1998, Nardini earned his law degree from Yale Law School and was executive editor of the Yale Law Journal.

Following law school, he clerked for Judges José A. Cabranes and Guido Calabresi, both on the Second Circuit, and for former Supreme Court Justice Sandra Day O’Connor. Nardini was also the U.S. Department of Justice attaché to Italy from 2010-2014.

He will take the seat of retiring Judge Christopher Droney