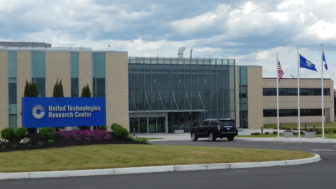 Washington – Federal officials are quietly weighing a proposed merger between Raytheon and United Technologies, and there is no early indication that they will throw up much objections to the marriage.

The Department of Justice has the lead in the review of the merger announced in early June, with the Pentagon and the Federal Trade Commission also involved.

“The Raytheon/United Technologies Corporation transaction will be evaluated on its own merits,” said Pentagon spokesman Lt. Col.  Mike Andrews. “The Department of Justice is the antitrust agency leading this investigation (and) the Department of Defense is working closely with the DOJ to conduct our due diligence.”

Andrews said the Office of the Under Secretary of Defense for Acquisition and Sustainment’s Industrial Policy at the Pentagon oversees the process of reviewing mergers for the military.

“We welcome any thoughts from industry on areas of concern, as part of our normal process.” Andrews said.

But he also said “the department is not in a position to discuss further as the review is still in-process.”

Raytheon Technologies Corp., as the new company will be called, will be a defense-and-aviation powerhouse, producing missiles, jet engines and cockpit electronics.

The proposed Raytheon-United Technologies merger is the latest in a wave of consolidations in the defense industry. In a little over a year, United Technologies, the parent company of engine maker Pratt & Whitney, bought Rockwell Collins for $30 billion; defense companies Harris Corp. and L3 Technologies agreed to merge in a $34 billion deal; and Northrop Grumman bought rocket-maker Orbital ATK for $9.2 billion.

Less competition can drive up costs while dampening innovation.

But Loren Thompson, a defense analyst for the Lexington Institute, said “there is a 100 percent probability that the Trump administration will approve the merger.”

One reason, Thompson said, is that there is little overlap between Raytheon and UTC that would pose anti-trust issues for the federal government.

“This is a huge merger, but there is nothing in it that would reduce competition,” Thompson said.

United Technologies makes both commercial and military engines, while Raytheon is focused most on defense.

Political ideology is another reason the federal government is likely to green light the merger, Thompson said.

Raytheon Technologies would be the nation’s second-largest defense contractor, behind Boeing and ahead of Lockheed Martin by annual revenue, with roughly $74 billion in sales.

The companies hope to close their deal in the second quarter of 2020 after the federal regulatory process is completed and United Technologies spins off its Carrier and Otis elevator businesses.  Other, smaller divestitures may also be forthcoming.

The merger also received a boost after shareholders of Raytheon and United Technologies overwhelmingly approved the deal last month.

And the companies already have begun early integration planning, even before the federal regulatory process has been completed.

Last month, Raytheon Chief Financial Officer Toby O’Brien, said “we don’t see any impediments there that would disrupt the plan to close the merger in the first half of next year.”

And while the actual merger is not expected to face many hurdles, there may be hiccups in its aftermath.

Melius Research analyst Carter Copeland indicated in a recent note that there could be somewhat of a culture clash.

The culture of United Technologies “is faster and more aggressive,” he said, while Raytheon “is more rigid and process-driven.”

Employment at Pratt & Whitney in East Hartford is expected to remain stable after the merger. But UTC’s headquarters in Farmington would be moved to integrate with Raytheon’s headquarters in the greater Boston area, resulting in a loss of about 100 executive jobs in Connecticut.

Thompson said that is not likely to have much of an impact.

“When the smoke clears, Connecticut will have lost nothing,” he said.