Too many CT colleges not delivering for their students, education group says

Many of Connecticut’s four-year colleges have low graduation rates and some also charge low-income students considerably more than they would have to pay elsewhere, according to a report from the non-profit organization Education Reform Now Connecticut.

And some of the state’s 22 schools surveyed for this study have both issues at play.

“The takeaway from this study is that too many Connecticut students are simply not set up for success. Connecticut can and should do better by its students,” said Amy Dowell, state director for Education Reform Now Connecticut. “What’s concerning and what the report lays out is that if you are making that steep investment, and in Connecticut it’s very steep, and you’re not graduating, then the system is doubly stacked against you.”

In addition, the report said that half of the colleges charge “an exceptionally high net price” to students from families with incomes of less than $30,000, with a dozen of those schools charging more than double what a national peer institution charged  comparable low-income students. A net price is the out-of-pocket charge to students and families after all grant aid is conferred.

“This data shows that our institutions of higher education are sometimes leaving our most vulnerable students worse off than before they enrolled. When we ask young people to take on debt without even earning the credentials that will allow for paying it off—that also has a compounding effect on our state economy,” said Dowell.

“Almost certainly, our institutions of higher education could do more to counsel these students and support them throughout their academic careers,” Dowell added. “But we can’t lose track of the underlying problem: namely, that our public school system isn’t producing graduates who are ready to succeed in college. It’s time for change.”

The non-profit organization, which is based in Westport, says it is focused on improving public education and protecting civil rights. It is the non-profit arm of Change Course CT PAC, which advocates for charter schools and supports Democratic candidates, and has a board of directors that is composed of finance industry executives, according to a 2018 Common Cause report. 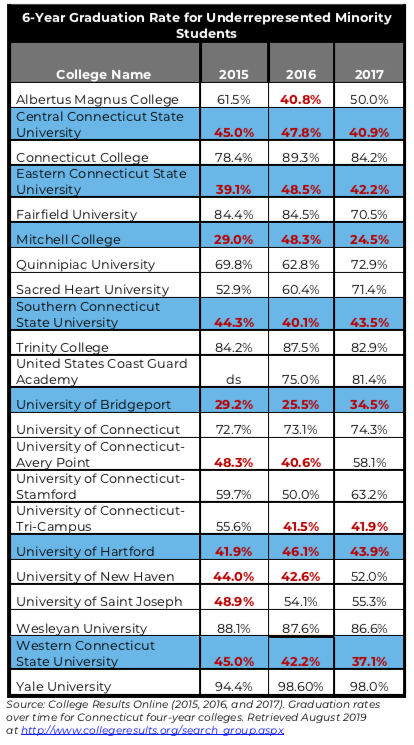 The net price in 2016, including tuition room and board, for students with family incomes of less than $30,000 was as follows:

In each case, the net price was well above that for peer schools, according to the report.

WCSU spokesman Paul Steinmetz said the higher price at Western is related to the university’s estimates of the higher cost for room and board and living expenses in Fairfield County.

He said that six-year graduation rates have been steadily climbing, hitting 49.6% in 2018 and 51.8% in 2019. He also noted that the school has initiated several programs to help boost retention and graduation rates, including academic help centers to assist in math and English.

Patrick Dilger, spokesman for SCSU, said that Southern has introduced a number of retention efforts to help students stay in college and graduate, including increasing the number of advisors, establishing new academic advising centers, and launching a program to provide additional supports for students of color who have been placed on academic probation. He noted that as a result of that program, 64% of participating students were removed from academic probation.

University of Hartford spokeswoman Meagan Fazio said the school has been investing heavily in programs that help all students succeed, such as adding a program that is specifically geared toward students who are the first in their families to attend college. She said more than 90% of students at the university receive some form of financial aid.

Fazio said the university found “some of the comparisons and conclusions in the report to be misleading.”

“The report’s authors compare our institution to institutions in other states where the state funding, demographics, institutional resources, etc. all vary dramatically,” she said in an email.

The three colleges that consistently graduated fewer than half their students overall during the past three years were Mitchell College, the University of Bridgeport and Western Connecticut State University, which all had graduation rates between 40% and 45% in 2017.