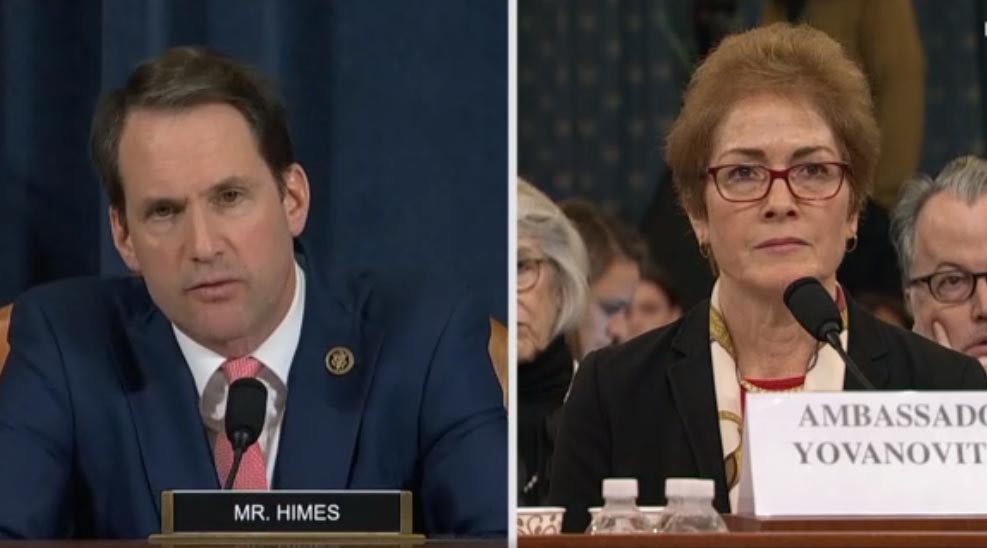 Washington – Rep. Jim Himes on Friday told former U.S. ambassador to Ukraine Marie Yovanovitch that he is an angry man, made so by President Donald Trump’s treatment of the longtime career diplomat.

“I am angry,” Himes, D-4th District said. “I’ve been angry since I learned about your summary and unexplained dismissal after a lifetime of excellent and faithful service to this country. I am angry that a woman whose family fled Communism and Nazism to serve this country beautifully for 33 years is literally under fire.”

Yovanovitch  told her side of the story Friday to members of the House Intelligence Committee after the president ousted her in the spring and called her “bad news” to Ukraine’s president in a notorious phone call that sparked the impeachment inquiry. In that phone call, Trump urged the Ukrainian president to investigate former Vice President Joe Biden and his son, Hunter, who had served on the board of a Ukrainian energy company.

At the second public impeachment hearing, Yovanovitch testified she was the victim of a “campaign of disinformation ” spearheaded by Trump’s personal attorney, Rudy Giuliani, and that she was likely ousted because of her work fighting corruption in Ukraine.

Yovanovitch is the daughter of Russian and Ukrainian parents who fled the Soviet Union and the Nazis. Born in Canada, her family moved to Connecticut when she was three years old. She graduated from the Kent School, where her parents taught foreign language.

Himes told Yovanovitch that the language Trump used to attack her “would have embarrassed a mob boss.”

“I am angry that a woman like you would not be dismissed, but humiliated and attacked by the president of the United States. I am not just angry for you, I’m angry for every single foreign service officer…” Himes said, “…every single intelligence officer who, right now, believes that a lifetime of service and sacrifice and excellence might be ignored by the president of the United States.”

Trump tweeted disparagingly of Yovanovitch as she testified, prompting Democrats to accuse him of witness tampering.

“Everywhere Marie Yovanovitch went turned bad,” Trump tweeted. “She started off in Somalia, how did that go? Then fast forward to Ukraine, where the new Ukrainian President spoke unfavorably about her in my second phone call with him. It is a U.S. President’s absolute right to appoint ambassadors.”

After made aware of Trump’s tweet, Yovanovitch defended her long service in the U.S. foreign service.

“I actually think that where I’ve served over the years, I and others have demonstrably made things better, you know, for the U.S. as well as for the countries that I’ve served in,” Yovanovitch said .

House Intelligence Chairman Adam Schiff told reporters that Trump’s attack was “witness intimidation in real time by the president of the United States.”

Rep. Rosa DeLauro, D-3rd District, who is not on the Intelligence Committee but who, like most House Democrats, is keeping tabs on the historic hearing tweeted Friday: “Pres. Trump’s attempt to intimidate and discredit Amb. Yovanovitch’s testimony is disgraceful.”

“She served honorably under Republicans and Democrats—until Trump & Giuliani decided their own personal & political interests were more important than our national interests,” DeLauro said.

Himes used the five minutes allotted to most of the members of the Intelligence Committee to make a point – that Trump had to removed Yovanovitch from her post to accomplish his purported goals in Ukraine.

“If you had remained as ambassador and not been dismissed,” Himes asked, “would you have supported a three-month delay in Congressionally mandated military aid to Ukraine?”

Himes then asked “if you had remained, would you have recommended to the president that he ask a new president of Ukraine to find out about Biden’s son?”

“No,” the former diplomat responded again. 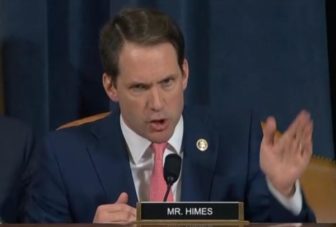 Himes also asked Yonavovich if she would have recommended the president ask the new Ukrainian President Volodymyr Zelensky to investigate a CrowdStrike server that was supposedly being held in Ukraine. That server was  invoked by Trump because CrowdStrike  company assisted the Democratic National Committee in investigating a 2016 hack by Russian operatives who were trying to influence the presidential elections.

Yovanovitch rejected the notion that the server had been in Ukraine. “I would repeat once again that the U.S. intelligence community has concluded it was the Russians,” Yovanovitch said.

She testified it was a “terrible moment” and that words fail her even now to describe it, when she learned of how Trump spoke about her to Zelensky in the now-controversial July 25 phone call.

She also said her ouster based on false accusations pushed by Rudy Giuliani has thrown American policy into disarray and given “shady interests the world over” a lesson in how to get rid of an American diplomat who opposes their operations.

While Democrats portrayed Yovanovich as a “anti-corruption ambassador” who ran afoul of Trump’s plans in Ukraine, Republicans on the intelligence panel portrayed her as someone who did not have firsthand knowledge of the phone call between Trump and Zelensky or a delay in U.S. military aid to Ukraine, which Democrats say was aimed to pressure Ukraine to investigate the Bidens.

Rep. Devin Nunes, the top Republican on the intelligence panel, said the former ambassador “is not a material fact witness” in the House impeachment probe.

“I’m not exactly sure what the ambassador is doing here today,” he said. “This seems more appropriate for the subcommittee on human resources at the Foreign Affairs Committee, if there’s issues with employment, disagreements with the administration…”

Schiff sternly denied Republican attempts to interrupt the hearing outside their allotted time.

That provoked a reaction from Trump, who said he avoided watching the first public impeachment inquiry on Wednesday but tuned into Friday’s event.

“I’ve been watching today,” Trump told reporters. ” For the first time, I started watching. And it’s really sad when you see people not allowed to ask questions. It’s totally — nobody’s ever had such horrible due process. There was no due process. And I think it’s considered a joke all over Washington and all over the world.”

Republicans on the intelligence panel also complained that Democrats have not forced an anonymous whistleblower who worked for the CIA to testify. That whistleblower’s  complaint about Trump’s phone call to Zelensky prompted the impeachment inquiry.

“I say it is appalling that my colleagues continue to want to out this whistleblower so he can be punished by the president,” Schiff said.