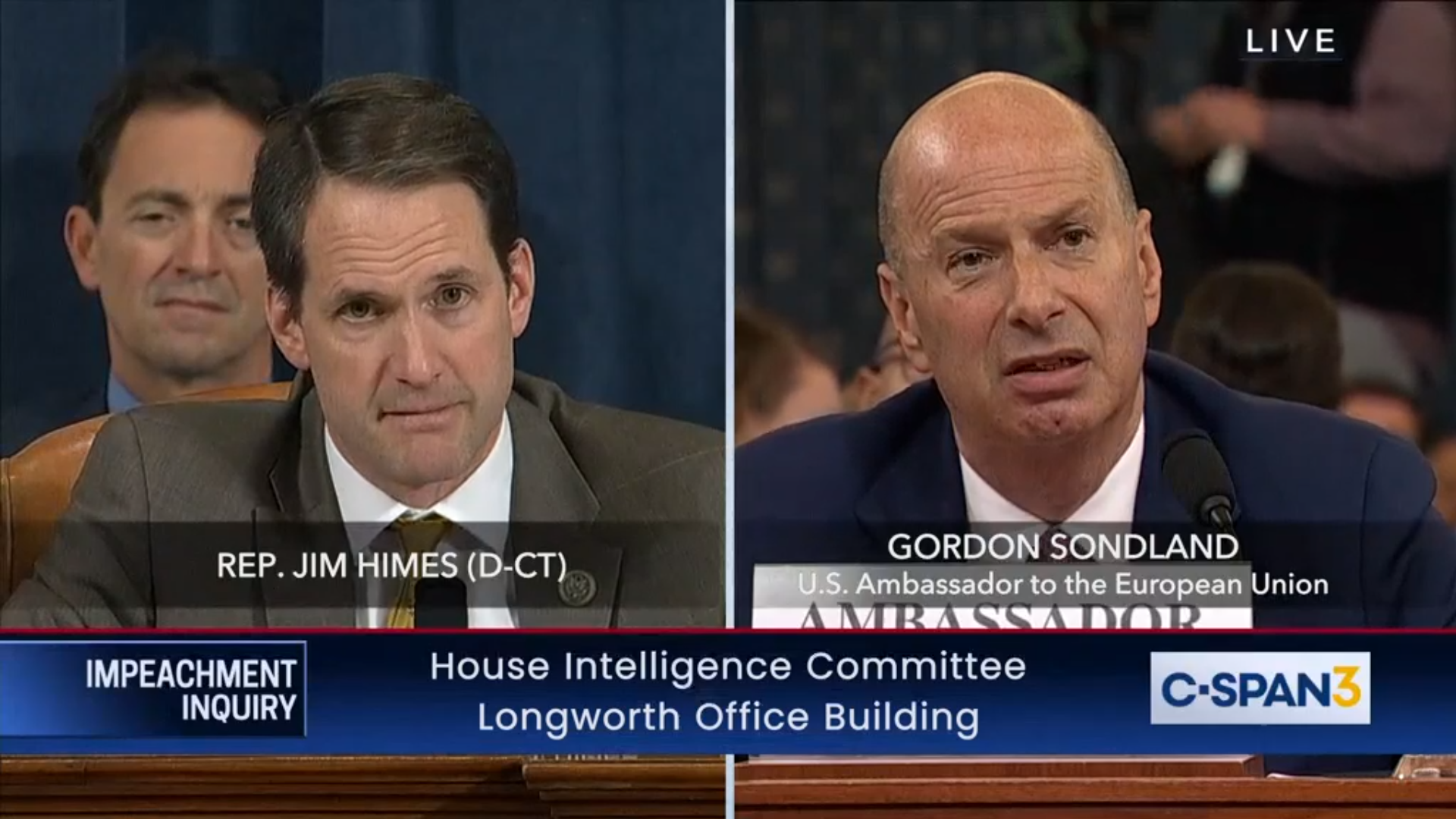 Washington – Rep. Jim Himes pressed Gordon Sondland, U.S. ambassador to the European Union, Wednesday about a key phone call he received from President Donald Trump at a restaurant in Kiev the day after the president’s controversial call with Ukrainian leader Volodymyr Zelensky.

During his testimony to the House Intelligence Committee, Sondland confirmed he received the phone call, but said he could not remember some of the details that David Holmes, a State Department lawyer, overheard as he sat with the ambassador at a restaurant table.

Holmes — who will testify publicly as part of the House of Representative’s impeachment inquiry — said in closed-door testimony last week that Sondland told Trump during that Sept. 26 call that Zelensky “loves your ass” and that Ukraine would grant Trump’s request to investigate former Vice President Joe Biden and his son.

Himes, D-4th District, the second-ranking Democrat on the Intelligence Committee, said U.S. intelligence agencies will soon obtain a transcript of that cell phone conversation and provide it to the congressional intelligence panel.

“I’m actually very confident we’ll get a transcript of that call,” Himes said. “A conversation in public between a high-profile ambassador and the president of the United States would be the top target for not one, but many, foreign intelligence services.”

Himes said U.S. intelligence would obtain the transcript of the call from the foreign spy agencies because of the “sensitivity” of the conversation between Sondland and Trump.

“The information will be used to embarrass the president or leverage other public officials,” Himes said. “Our people are good. We will be seeing the transcript.”

“The information will be used to embarrass the president or leverage other public officials. Our people are good. We will be seeing the transcript.”

In his explosive testimony before the panel Wednesday, Sondland said Trump and his personal lawyer, Rudy Giuliani, conditioned a White House invitation to Zelensky on demands that Ukraine publicly launch investigations that could damage Biden.

“I know that members of this committee have frequently framed these complicated issues in the form of a simple question: Was there a ‘quid pro quo?’” Sondland said. “With regard to the requested White House call and White House meeting, the answer is yes.”

Sondland also testified before the House Intelligence Committee that he never knew for sure if the White House had frozen nearly $400 million in security assistance as part of the pressure campaign against Ukraine, but operated as if that was the case.

“The aid was my own personal guess based on the fact that two plus two equals four,” Sondland said.

The U.S. military aid was frozen by Trump, witnesses say, for 55 days. It was released after a whistleblower made a complaint about the July 25 phone call between Trump and Zelensky in which Trump asked Ukraine’s president to investigate the Bidens. The money was also released shortly after members of Congress pressed Trump administration officials about the hold.

“I know that members of this committee have frequently framed these complicated issues in the form of a simple question: Was there a ‘quid pro quo?’ With regard to the requested White House call and White House meeting, the answer is yes.”

“In the absence of any credible explanation for the hold, I came to the conclusion that the aid, like the White House visit, was jeopardized,” Sondland said. “My belief was that if Ukraine did something to demonstrate a serious intention [to launch the investigations Trump wanted] then the hold on military aid would be lifted.”

Sondland repeatedly said that the pressure campaign on Zelensky wasn’t secret because a lot of high-ranking U.S. officials knew about it. Those in the know included Secretary of State Mike Pompeo, Vice President Mike Pence and acting White House chief of staff Mick Mulvaney, Sondland testified.

“Everyone was in the loop,” Sondland said.

Himes asked Sondland about the broad circle of U.S. officials who knew about the campaign.

“The theme of your testimony today is that everybody knew and signed off, which is a little different from what we’ve heard,” Himes said. “We’ve heard from others that your effort was irregular, shadow foreign policy, characterized as a drug deal … that was the national security adviser of the United States characterizing it. You have said the Secretary of State was not only aware, but that he applauded it. If this had been irregular, he would have put an end to it and he did not.”

Sondland replied that Pompeo praised him for “the totality of what I had been working on,” including pressing Ukraine for investigations.

“Everyone was in the loop.”

“We thought it was in the center lane,” he said.

In his opening statement, Sondland, who prided himself on his access to Trump after donating $1 million to the president’s inaugural fund said: “I agreed to testify because I respect the gravity of the moment and I believe I have an obligation to account fully for my role in these events.”

Sondland also said the State Department and White House did not provide him with phone records, emails or other documents that could have helped him reconstruct his memory of the events at the center of the investigation.

“They have also refused to share these materials with this committee,” Sondland said.

Rep. Adam Schiff, the top Democrat on the Intelligence Committee, told reporters that Sondland’s testimony, which was given on the 5th day of impeachment hearings was “the most significant to date.”

Schiff said Sondland proved “the conditioning of official acts to something of great value to the president.”

“It goes right to the heart of the issue of bribery, and other potential high crimes and misdemeanors.,” Schiff said, referring to the standard set for impeachment by the U.S. Constitution.

But Republicans on the panel dismissed the impact of Sondland’s testimony, saying he never spoke to Trump about the withholding of aid. 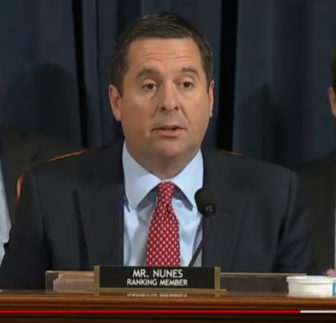 Rep. Devin Nunes of California, the top Republican on the Intelligence Committee, said Hosue Democrats “hijacked” the panel and are attempting to concoct “ludicrous” theories about Trump to aid their impeachment efforts.

Nunes also said there was good reason for Trump to ask for investigations into Ukraine’s role in the 2016 elections.

Nunes said Ukraine wanted Hillary Clinton to win and Trump to lose, and released documents he described as “disputed” that led to criminal charges and a prison term for Trump’s one-time campaign manager Paul Manafort.

“They refuse to call Hunter Biden,” he said. “Hunter Biden could get to the bottom of this.”

Trump distanced himself from Sondland in comments to reporters on Wednesday, saying, “This is not a man I know well.”

The president also said Sondland testified Trump had denied to him there was a quid pro quo.

“That means it’s all over,” Trump said.

In a late afternoon session, Himes attacked a GOP defense of Trump’s hold on military aid to Ukraine — that he wanted to make sure the country had taken steps to fight corruption before releasing the money and that the president isn’t a big fan of foreign aid, part of his “America First” philosophy.

“President Trump wasn’t worried about corruption in Ukraine,” Himes said. “In fact, in the two conversations he had with the president of Ukraine on July 21st and July 25th not once does the president use the word or mention corruption.”

Himes also said the withholding of aid was “illegal,” and in violation of a 1974 Impoundment Control Act that prohibits presidents from withholding congressionally appropriated funds without the approval of Congress.

He also said federal law required all recipients of U.S. military aid to meet certain “benchmarks” concerning corruption and that the government of Ukraine “has taken substantial actions to make defense institutional reforms for the purpose of decreasing corruption.”

Himes also noted Ukraine had been certified by the Pentagon to have met those benchmarks in May, months before the U.S. military aid was frozen in July

“The Department of Defense had spent weeks, if not months, determining that the Ukrainian government met every requirement in the law and made significant strides in combating corruption, is that correct? ” Himes asked witness Laura Cooper, a deputy assistant Defense secretary.

“That is correct, we made a determination in May,” Cooper said. 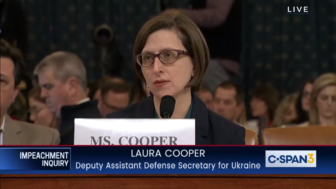 In her opening statement, Cooper said her staff received an inquiry from the Ukrainian Embassy asking about the status of the U.S. military funds July 25, the same day as Trump’s phone call with Zelensky.

That testimony threatens anther GOP defense of Trump — that the Ukrainians were not aware of the hold on security aid at the time of the call between the heads of state, and that they found nothing alarming in the presidents’ discussion.