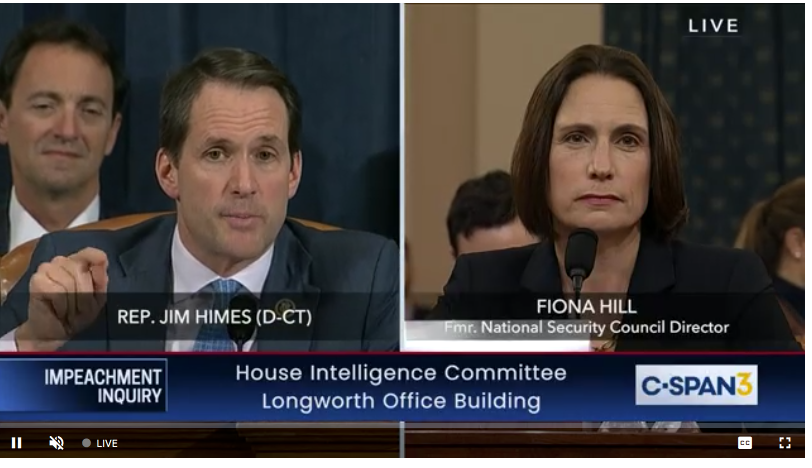 Washington – During Thursday’s impeachment hearing, U.S. Rep. Jim Himes focused on a witness’s public rebuke of Republicans for attempting to sow doubt that Russia interfered in the 2016 U.S. presidential election and for peddling a narrative that Ukraine was “out to get” President Donald Trump.

“I don’t know what my colleagues believe, but I do have a pretty good sense of what the effects are of creating ambiguity, of lacking clarity and conviction around the Russian attack on the election of 2016,” Himes, D-4th District, said. “Not a day goes by in which ranking member (Devin) Nunes does not speak of the ‘Russia hoax’ and this is an area in which context is pretty important.”

Fiona Hill, the former White House adviser on Russia, opened her testimony before the House Intelligence Committee by pushing back on GOP allegations that Ukrainians worked to foil Trump’s election.

“Based on questions and statements I have heard, some of you on this committee appear to believe that Russia and its security services did not conduct a campaign against our country and that perhaps, somehow, for some reason, Ukraine did,” Hill said. “This is a fictional narrative.”

Hill also said, “I refuse to be part of an effort to legitimize an alternate narrative that the Ukrainian government is a U.S. adversary, and that Ukraine — not Russia — attacked us in 2016.”

Himes read Trump tweets calling investigations into Russian meddling “a Democratic scam,” and condemned the “failure to name and shame the Russians for the attack in 2016.”

“That is not in the service of our national security, is it?” Himes asked.

“I refuse to be part of an effort to legitimize an alternate narrative that the Ukrainian government is a U.S. adversary, and that Ukraine — not Russia — attacked us in 2016.”

Himes also asked Hill about an op-ed written by a former Ukrainian ambassador to the United States, an opinion piece sparked by a comment Trump made when he was running for president in 2016 that “the people of Crimea from what I have heard would rather be with Russia than where they are.”

The op-ed, by former Ambassador Valeriy Chaly, said “even if Trump’s comments are only speculative, and do not really reflect a future foreign policy, they call for appeasement of an aggressor and support the violation of a sovereign country’s territorial integrity and another’s breach of international law.”

Republicans on the intelligence panel say this editorial is proof Ukrainians were trying to make sure Trump did not win the election.

Himes asked Hill if the op-ed “sounds like election interference to you?”

Hill responded that “it’s probably not the most advisable thing to do for an ambassador because you never know who’s going to win.”

She also said that Ukraine and many other U.S. allies “bet on the wrong horse” and believed Clinton would win the election.

But she said it is clear that Ukraine’s outreach to Clinton during the campaign was far different than Russia’s “top down” effort led by Vladimir Putin and involving Russia’s military and intelligence service.

She also said “an awful lot” of foreign officials said “hurtful things” about Trump “and it did not affect security assistance or having meetings.”

“If it had there would have been a lot of people [Trump] wouldn’t have met with,” Hill said.

During Wednesday’s impeachment hearing, Rep. Devin Nunes, the top Republican on the intelligence panel, said Democrats “got campaign dirt from Ukrainians in the 2016 election” and “were heavily involved, working with Ukrainians, to dirty up the Trump campaign.”

In Thursday’s hearing, Nunes repeatedly brought up the “Steele Dossier,” a document commissioned by political research firm Fusion GPS that was largely written by former British intelligence agent Christopher Steele that alleged Russia had dirt on Trump that left him vulnerable to blackmail. Nunes said Steele used Ukrainian sources in compiling the dossier.

Hillary Clinton’s campaign and the Democratic National Committee hired the services of Fusion GPS.  Republicans say this “false” dossier launched investigations into Trump, but there’s no evidence of that.

Under questioning by Nunes, Hill said she received a copy of the dossier, which she called a “rabbit hole,” the day before it was published by Buzzfeed.

“Focusing on particular cases, including particular cases where there is an interest of the president, it’s just not part of what we’ve done. It’s hard to explain why we would do that,” Holmes said.

Holmes provided details about a phone call he overheard at a restaurant in Kiev in which U.S. diplomat Gordon Sondland — who testified before the Intelligence Committee on Wednesday –and Trump discussed efforts to get Ukraine to commit to the investigations the president wanted.

Yesterday, Himes told Sondland, who said he had trouble remembering details of that call, that the U.S. intelligence operation will obtain a transcript of the conversation and provide it to Congress.

Thursday’s public hearings are likely to be the last conducted by the House Intelligence Committee, which is expected to make a report of its findings next week and send them to the House Judiciary Committee, the panel in charge of drafting articles of impeachment.

U.S. House Speaker Nancy Pelosi said Thursday there’s clear evidence  Trump used his office for personal gain and undermined national security, but that no final impeachment decision has yet been made.