Chocolate milk back in New Haven schools — for now 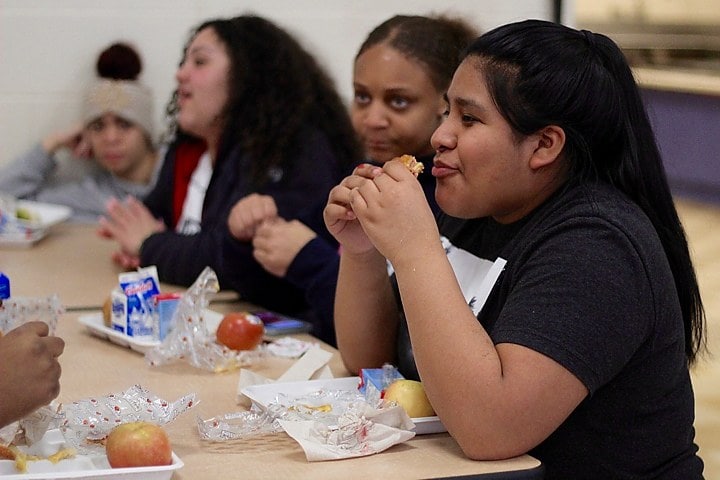 Students in the Coop High caf: Do they need more cow’s milk?

Chocolate milk, banned for the last decade, is making a return to the iceboxes of New Haven’s high school cafeterias. Twice a week.

That reversal, which will make chocolate milk available on a limited basis for a six-month pilot, was narrowly approved at Monday night’s Board of Education meeting.

The 4-3 vote came a wide-ranging discussion that’s being echoed in school districts across the country about who’s ultimately responsible for children’s nutritional health: The kids who eventually need to decide for themselves? Or the adults who already know better?

With Monday’s vote, chocolate milk can now be served, but only in high schools, only at lunchtime and only twice a week.

In 2011, after seeing a study from the Rudd Center for Food Policy and Obesity, district officials decided to rewrite its menu. They concluded it didn’t make sense to keep serving chocolate milk, hot dogs and breaded cutlets with the spike in childhood obesity.

But kids have asked for chocolate milk almost incessantly since then. They’ve argued a lot of kids take the plain milk and trash it — a huge amount of waste that led Los Angeles to reverse its ban. At the very least, they’ve added, chocolate milk would be better than sodas that students might bring from home instead. 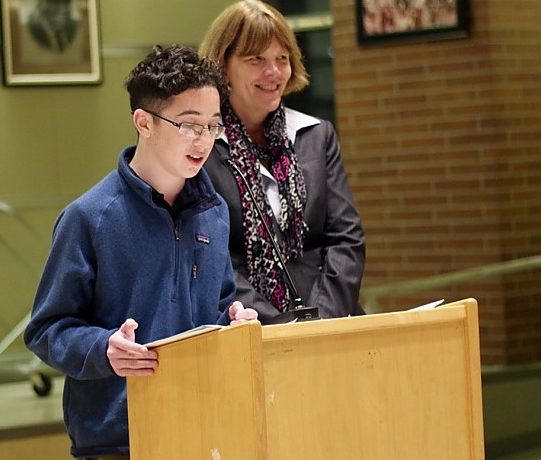 Spencer Greene, a sophomore at Engineering & Science University Magnet School, tried to put some numbers to that. In a survey of roughly 200 students, 88 percent said that they’d grab a chocolate milk in the cafeteria, and 91 percent believed their classmates would drink it.

Board members split on whether that increased consumption would be a good thing.

Gail Sharry, the district’s food services director, explained that, in order to qualify for federal reimbursement, schools have to offer cartons of milk. Describing it as “a very important way” for students to get Vitamins A and D and calcium, she said only about one-third of kids currently take it at either breakfast or lunch.

The chocolate milk, which Sharry hopes will boost the number of kids who pick it out, has eight additional grams of sugar, she said.

Jackson-McArthur, a pediatrician and the school board’s secretary, said that there is a new understanding about how healthful milk is for kids — even without all the extra sugar. She said that she now encourages parents to pour a glass of water with their children’s meals, rather than milk.

“The amount of milk that they’re given is not as nutritious as it is being promoted,” Jackson-McArthur said. “We’re trying to fight obesity and diabetes, but we’re pushing something that has more sugar. I don’t understand why we would want to do that.”

Iline Tracey, the interim superintendent, said she had never give any of her seven kids any milk.

“It’s for the baby cow, actually,” she said. “We can guide our young people into doing more research around that.”

Other board members said that they don’t think chocolate milk was so unhealthy that they couldn’t leave the choice of what to drink up to students.

Conaway, a recently retired principal, said that schools should use the reintroduction of chocolate milk to teach them about a healthy diet. Maybe on sugar and addiction in a science class, added Mayor Harp, who said that she has “struggled with weight issues” herself.

Goldson, the school board’s president, said he’s personally not a lactose guy. He said he supported the proposal because it had been developed by students and he said he wanted to “support their engagement.”

“These are our high school kids. You put them on the board, for Chrissake,” he said. “Let’s give them the ability to decide what kind of milk they want to drink.”

Before the vote, Arouna told the board members that, for students, sipping chocolate milk with lunch might not be about the nutrition, just like the fruit juice they can pick out sometimes too.

While this 4-3 vote lacked the rancor the board’s past decisions that led to a threatened duel on Bowen Field, Joyner said he still had a challenge for Goldson after this one. Joyner said that he’ll be back with a gallon of chocolate milk at the next meeting. He dared Goldson to chug it in front of the board.

This story was first published in the New Haven Independent on Nov. 26, 2019.