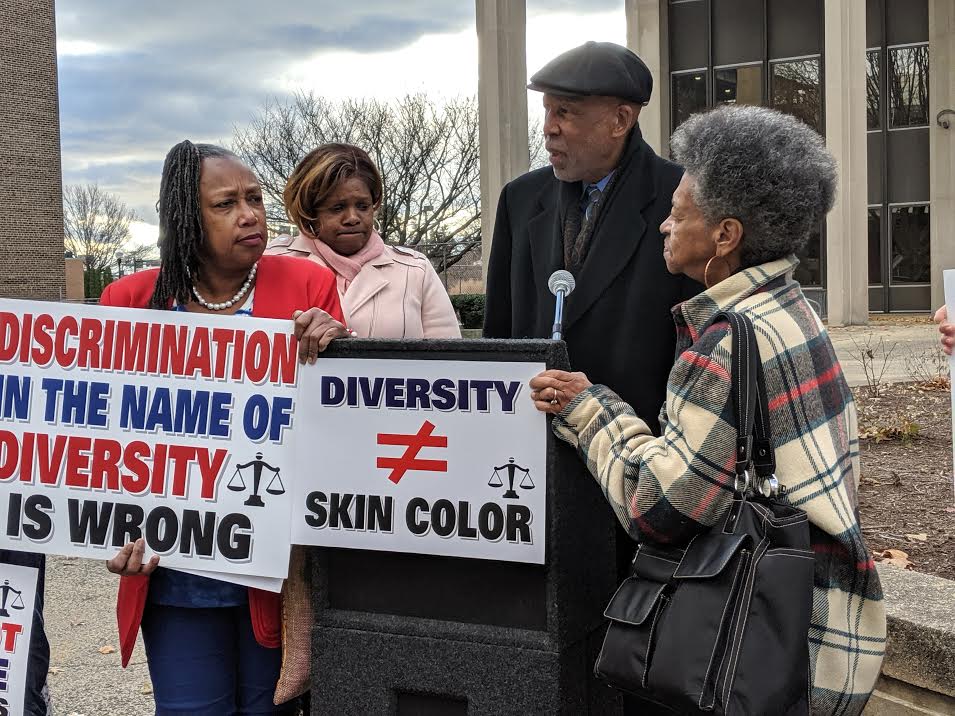 From left: Rjo Winch, a member of the Hartford City Council, Gwen Samuel, president of the CT Parents Union, Terrence Roberts, one of the Little Rock Nine who integrated Central High School in 1957, and Linda Faye Wilson of New Haven.

Bridgeport —  U.S. District Court Judge Stefan Underhill heard arguments Thursday on a motion to dismiss a suit seeking to challenge one of the state’s key levers to promote diversity in schools.

Oliver Dunford, an attorney for the Pacific Legal Foundation, the conservative legal group that has filed the suit on behalf of the Connecticut’s Parents Union, said it wasn’t clear when Underhill would rule.

The state is arguing that the parents union, an advocacy group that says it is working to obtain educational opportunities for all, lacks legal standing.

The suit filed in February on behalf of the parents union alleges that racial quotas or targets — based on those set in the Sheff desegregation case in Hartford — are violating the rights of black and Hispanic students. The plaintiffs claim the minority students are prevented from attending certain schools when it might upset the specified racial balance.

The suit alleges that under Connecticut law, “students are being turned away from the state’s best schools simply because they have the wrong skin color.”

At issue are 2017 state regulations that require inter-district magnet schools to maintain at least 25% of seats for white and Asian students, thereby capping the enrollment of black and Hispanic students at 75%. The parents union is arguing that this law, intended to promote diversity in magnet schools, means that black and Hispanic students are sometimes turned away because their admission would upset the required racial ratio.

The state argues that the Connecticut Parents Union does not have legal standing because it “fails to allege that either it or any of its members have even applied or intend to apply to a Connecticut inter-district magnet school.”

The plaintiffs argue they do have standing and will continue “to suffer specific and redressible injury.” That harm, the lawsuit says, is the energy and resources that the parents union expends to fight the alleged racial quotas.

Gwen Samuel, president of the parents union, attended the hearing with about a dozen supporters, along with author Terrence Roberts, one of the “Little Rock Nine,” a group of black students who, in 1957,  were the first African Americans to attend classes at Little Rock Central High School in Arkansas.

Following the court proceeding, the group gathered outside the court holding signs with slogans such as “Discrimination in the name of diversity is wrong” and “My race should not hurt me in admissions.”

Roberts addressed them saying, “I applaud your effort. I know the kind of commitment it takes, the kind of hard work necessary to accomplish your goals. It’s not done overnight, unfortunately, but we’ve been at this for centuries, so we are accustomed to putting in the time and it will pay off.

In 2018, the PLF filed a similar suit challenging the so-called quotas in use in Sheff magnet schools arguing, as it does in the case filed this year, that the targets violate the constitutional rights of black and Latino students who are denied admission if the 25% threshold has not been met for white and Asian students.

Lawyers for the NAACP Legal Defense Fund, the ACLU and the Center for Children’s Advocacy, who are advocates for the Sheff suit, counter that if the federal courts bar the state from conducting a lottery that is tailored to enroll no more than 75% black and Hispanic students in a school, the magnet schools would cease to exist.

They argue that a State Supreme Court order to desegregate schools under Sheff would then be almost impossible to accomplish.