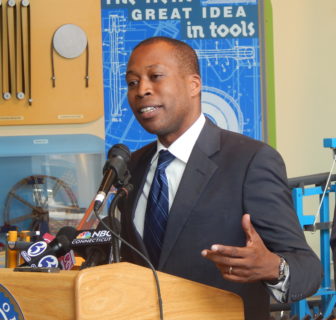 Scott D. Jackson, a former Hamden mayor who has held high-ranking jobs in the administrations of Gov. Ned Lamont and Gov. Dannel P. Malloy, is stepping down next month as the state commissioner of revenue services to become the chief administrative officer of New Haven under the city’s incoming mayor, Justin Elicker.

Jackson will give Elicker a high-profile administrator with experience in municipal, state and federal government, beginning as an aide to U.S. Sen. Joseph I. Lieberman and followed by stints as chief administrative officer and then mayor of Hamden, a racially diverse suburb on New Haven’s northern border.

“It is with decidedly mixed emotions that I submit to you this letter of resignation, effective Jan. 16, 2020,” Jackson told Lamont in a letter dated Friday. “I have been offered an opportunity to continue my public service in a role that allows me to engage in a more hands-on fashion with communities of need in New Haven, as well as re-initiate conversations around regional efficiencies in which I engaged as a municipal leader earlier in my career.”

Elicker begins his two-year term on Jan. 1, succeeding Mayor Toni N. Harp, the three-term incumbent he soundly defeated in the Democratic primary and general election. Jackson’s appointment is subject to confirmation by the city’s Board of Alders.

“I’m very excited to work with Scott,” Elicker said. “He has a strong reputation and the kind of experience that is critical to manage the departments he will be overseeing.”

Elicker is a white man succeeding the first black woman to lead New Haven, a city in which non-Hispanic whites are a minority. The appointment of Jackson, who is black, reflects a commitment to expertise and diversity, Elicker said.

“I think it is important to have people that bring a high level of expertise, that are hard-working and have a high standard of ethics and reflect the diversity of our city,” Elicker said.

Jackson was elected mayor of Hamden in 2009 and resigned in 2015 to join the Malloy administration. Malloy initially hired him as the undersecretary for intergovernmental affairs, then appointed him as the labor commissioner in February 2016 and as revenue services commissioner in June 2018, six months before Malloy left office.

Jackson was reappointed on Lamont’s first day in office as the commissioner overseeing the collection of taxes in Connecticut, one of 10 Malloy administration holdovers whose jobs require legislative confirmation.

“I appreciate Scott’s service with the state and his leadership in this important administrative function of government,” Lamont said.

Jackson notified Lamont of his intentions more than a week ago, and a search for a successor is underway.

“I am incredibly energized by this opportunity to serve the people of New Haven under Mayor Elicker. New Haven is the greatest small city in the country, and the opportunity to improve the lives of its families, the prosperity of its businesses, and the health of its institutions is a once in a lifetime opportunity,” Jackson said in a statement released by Elicker. “I look forward to reconnecting with so many old friends who are active in the civic health of the community and collaborating on actions that make a measurable positive impact on people’s lives.”

Jackson was one of the go-to persons tapped by Malloy to serve on state advisory groups.

He chaired the Sandy Hook Advisory Commission, which delivered a report in 2015 recommending greater mental health services and tighter gun laws in the wake of the 2012 shooting deaths of 26 students and educators. And he served on other statewide panels, including the one that studied the resilience of Connecticut’s infrastructure after two devastating storms.

Jackson is married to Mandi Isaacs Jackson, the executive director of Music Haven, a non-profit. They have two sons.

Jackson is graduate of Cornell University.