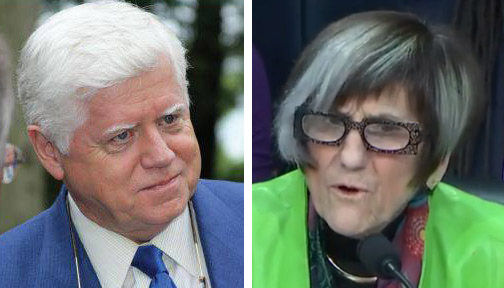 Washington – Reps. Rosa DeLauro and John Larson were the first Connecticut lawmakers to embrace the articles of impeachment unveiled by Democratic leaders Tuesday.

The articles focused narrowly on the president’s conduct in Ukraine. Trump is charged with holding up U.S. military aid and an Oval Office meeting in exchange for Ukrainian President Volodymyr Zelensky’s commitment to investigate former Vice President Joe Biden and his son Hunter.

“While I was reluctant to pursue impeachment about the 2016 election, President Trump’s unchecked efforts to get foreign powers to intervene in the next presidential election and unchecked attempts to block any investigation by the United States Congress left me with no choice,” DeLauro said.

The two articles, which will be voted on by members of the House Judiciary Committee on Thursday, accuse the president of abuse of power in his dealings with Ukraine and obstruction of Congress because he blocked key administration officials from testifying in the House impeachment inquiry and providing lawmakers with subpoenaed documents.

“President Trump abused the powers of the presidency by ignoring and injuring national security and other vital national interests to obtain an improper personal political benefit,” said a draft of the first article. “He has also betrayed the nation by abusing his office to enlist a foreign power in corrupting democratic elections.”

If the committee approves the articles, they would go to the House floor for a debate and vote as early as next week.

DeLauro said she had been reluctant to call for impeachment “because I feared it would further divide the country, be perceived as overturning the 2016 election, and go to the United States Senate where Republicans would acquit President Trump regardless of the evidence.”

The GOP-controlled U.S. Senate will hold a trial on the charges if the House approves the articles.

“The evidence that has been laid out has made it clear that there has been abuse of power and obstruction of a co-equal branch of government by the president,” Larson said. “I support the articles of impeachment. While I would have been fine continuing the investigation, I think it is important that the process moves forward for the country.”

Rep. Jim Himes, D-4th District, who as a member of the House Intelligence Committee had a major role in the impeachment inquiry, said the articles released on Tuesday “succinctly encapsulate the evidence and testimony we have gathered over the past months from witnesses who reported on the president’s wrongdoing

“The two included charges – abuse of power and contempt of Congress – have been demonstrated with clear evidence,” Himes said. “Because the President openly continues both his efforts to interfere in the 2020 election and directing members of his administration to ignore Congress’s Constitutional investigative authority, I support moving forward and bringing the articles to the full House for a vote.”

Himes, however, will not decide whether to vote for the articles until they are reported out of the Judiciary Committee.

The articles were announced Tuesday morning by House Democratic leaders who said Trump forced their hand. 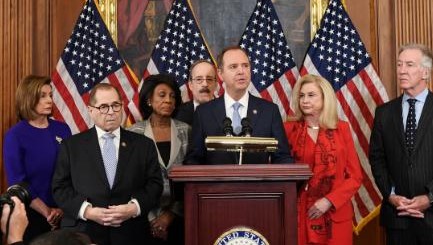 “We must be clear: No one, not even the president, is above the law,” said House Judiciary Committee Chairman Jerrold Nadler, D-N.Y., at a news conference with House Speaker Nancy Pelosi and other House leaders.

Trump tore into Nadler on Twitter after the articles were announced, saying the Judiciary chairman’s claim that Trump pressured Ukraine to interfere in the 2020 election is “ridiculous” and “not true.”

Some Democrats wanted the impeachment articles to include an obstruction of justice charge, based on instances detailed in former special counsel Robert Mueller’s report.

“Obstruction of justice, I think, is too clear not to include,” Clyburn said.

In focusing the charges narrowly on the Ukraine matter, Democrats made a political calculation designed to protect moderate lawmakers who face steep re-election challenges in districts that were won by Trump in 2016.

A Quinnipiac poll released Tuesday showed support for impeachment, which has never had decisive majority support, is slipping.

Rep. Jahana Hayes, D-5th District, said through a spokesman she had no comment on the articles.

The office of Rep. Joe Courtney, D-2nd District, did not respond to a request for comment.

But the all-Democratic Connecticut delegation to the U.S. House is likely to vote unanimously to impeach the president.