Some CT lawmakers, but not all, embrace U.S.-Mexico-Canada Agreement 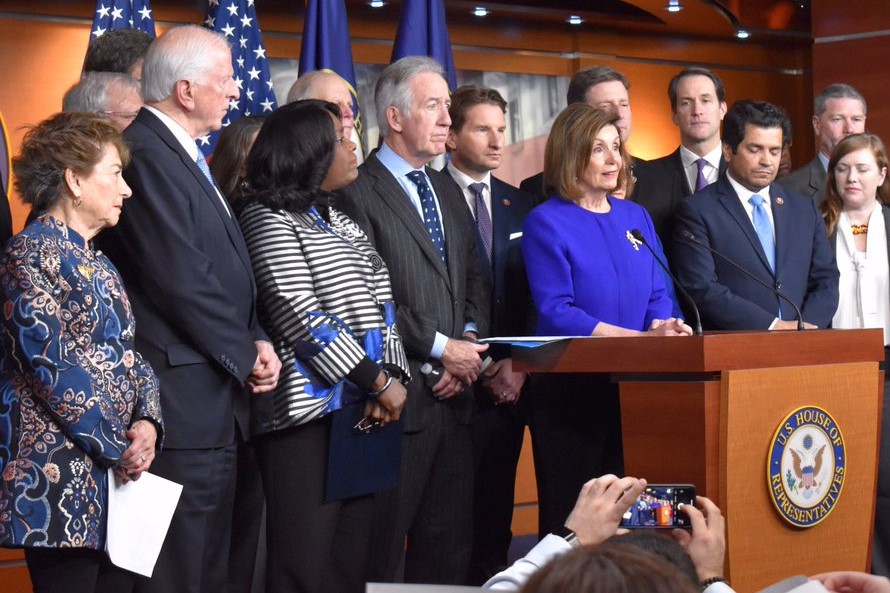 Reps. Jim Himes, in the second row to the right, and John Larson (out of the frame of the photo) helped House Speaker Nancy Pelosi announce a deal on the U.S.-Mexico-Canada agreement Tuesday.

Washington – Reps. Jim Himes and John Larson stood with House Speaker Nancy Pelosi as she announced an agreement on Tuesday that would replace the 25-year-old North American Free Trade Agreement.

“State of the art deal, support from labor, good for all,” Himes tweeted after he left the stage.

But not all Connecticut lawmakers were eager to embrace the U.S.- Mexico-Canada Agreement.

Rep. Rosa DeLauro, who has opposed NAFTA and other trade deals, said she is undecided about the USMCA,  which has been dubbed NAFTA 2.0.

“We have made real progress for working families,” she said. “I am going to wait to review the final text.”

Larson and DeLauro were among nine House Democrats chosen by Pelosi to form a working group that negotiated the terms of the USMCA directly with U.S. Trade Representative Robert Lighthizer.

DeLauro was tasked with ensuring the enforcement mechanisms of the new treaty are effective. She led other Democrats in pushing for better labor and environmental protections in a draft of the treaty provided by the White House.

“This is a day we’ve all been working to and working for on the path to yes,” Pelosi said.

The House Speaker announced the agreement at the same podium where barely an hour before she announced the release of two articles of impeachment against Trump.

The president late Tuesday called the deal on the USMCA a “silver lining” on impeachment. He said Democrats felt compelled to “muffle” impeachment with USMCA out of “embarrassment.”

Canada and Mexico are among Connecticut’s top trading partners and the state’s manufacturers are likely to benefit from the new trade deal. Connecticut exported $2 billion worth of goods to Canada in 2018  and nearly $1 billion to Mexico.

“We’ve been big supporters of the USMCA,” said Joe Brennan, president and CEO of the Connecticut Business and Industry Association. 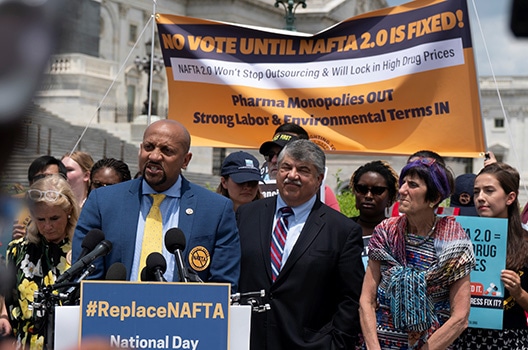 Brennan said the CBIA worked with the National Association of Manufacturers and the U.S. Chamber of Commerce in a coalition to promote the USMCA.

The state’s dairy farmers, struggling from years of low milk prices, are expected to benefit from the deal. Although Connecticut’s dairy farmers don’t export much milk or cheese, the USMCA opens the door for other, larger, dairy producers to sell more of their products to Mexico and Canada, which is expected to raise U.S. milk prices.

“Finalizing USMCA will bolster international confidence in the U.S. as a serious negotiating partner and build momentum for other trade agreements in key markets abroad,” said Tom Vilsack, president and CEO of the U.S. Dairy Export Council. “Without this crucial trade agreement, Made-in-America dairy and agriculture products could be left behind in the new year.”

The state’s health insurance industry, which has made lowering prescription drug prices a priority, also scores a win.  The final agreement abolishes a provision that would increase the price of medicine in North America by protecting expensive, new biologic drugs from generic competition, so-called “biosimilars.”

The U.S. House is expected to vote to ratify the bill before the end of the year.