Barbara Dalio speaks during the second meeting of the Partnership for Connecticut. At left is Gov. Ned Lamont, a member of the partnership board, and Erik Clemons, chairman of the board.

New Haven — The Partnership for Connecticut, a public-private venture formed to help struggling Connecticut schools, moved to hire legal counsel and accounting services, heard an update on the search for a chief executive officer, and discussed its budget and mission during its second meeting Monday. And it was all done in a two-and-a-half hour open session.

That’s a contrast to the partnership’s first meeting, which was conducted mostly behind closed doors.

The partnership, which is a venture between the state and hedge fund giant Ray Dalio’s philanthropic group, has been criticized for a lack of transparency because it originally planned to hold all its meetings privately.

“Our hope is that there’s never a question about what money is coming in from where, where it is going, and why and what’s happening because of it,” said Andrew Ferguson, who works for Dalio Philanthropies and is a pro bono senior advisor to the partnership.

However, Ferguson did say a decision hasn’t yet been made about whether anonymous donations will be allowed.

Republican legislators have been particularly critical of the partnership’s lack of transparency, but Sen. Minority Leader Len Fasano, R-North Haven and a member of the partnership board, was optimistic after Monday’s meeting, which was held at the Yale School of Management.

“We’re off to a good start,” Fasano said. “I thought it was very open, and the discussion very frank, today.” 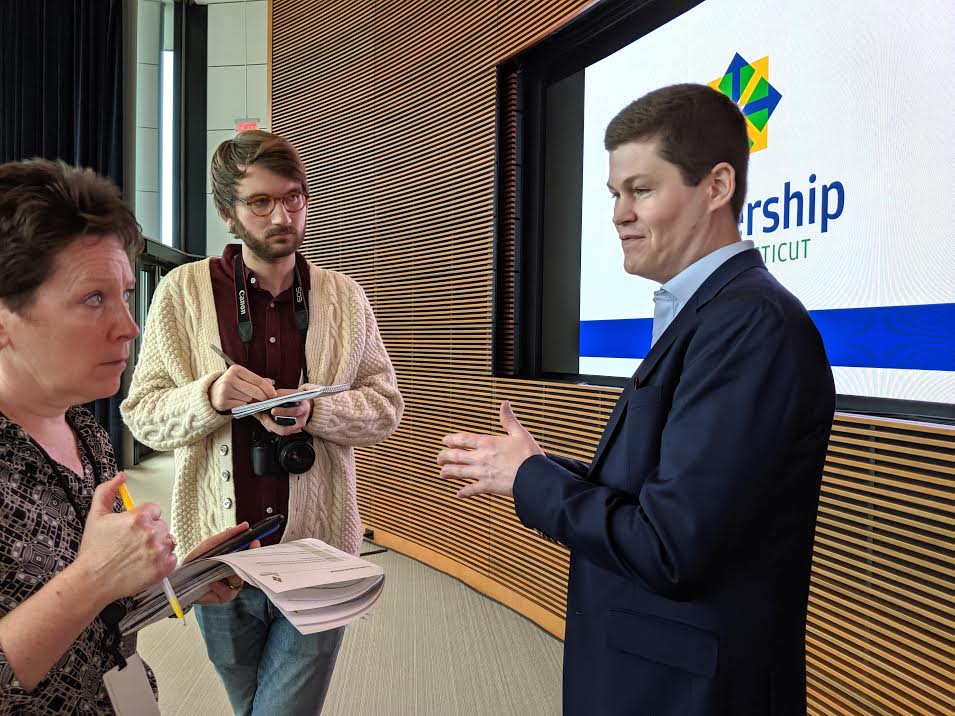 Andrew Ferguson, who works for Dalio Philanthropies and is a pro bono volunteer senior advisor to the partnership, talks to reporters after the meeting.

The partnership plans to invest between $200 million and $300 million over the next five years in programs to help disadvantaged youth who have become disengaged or dropped out of school. The state and Dalio Philanthropies are each putting in $100 million. The partnership hopes to raise an additional $100 million from private donors.

Ferguson said the fundraising effort will begin in 2020, but he expects it will begin slowly because donors want to see programs operating –“to see the wheels and kick the tires before they invest.”

He said the soonest the partnership could begin investing would probably be this spring or summer.

Dalio has already provided $425,000 to the program but funding for the first year of the five-year program will not become available until February, with $20 million coming from the state and the balance of $20 million from Dalio.

The budget distributed at Monday’s meeting indicates that $324,871 will be spent during the first six months of  2020.

There are 39,000 public high school students who are disengaged or disconnected from school, according to Ferguson. While most of those children are from the state’s struggling cities, 9,000 are from towns with above-average income levels, 78% are low income and 36% are males of color.

If Connecticut could reengage at least half of those 39,000, he said, 2,000 more students would graduate from high school each year, 8,000 more jobs would be created for young adults, and an estimated 4,000 fewer people would be incarcerated.

“The nation’s watching this initiative,” she told board members. “I would say that a large majority of the candidates I reached out to and spoke to knew about the Partnership for Connecticut before I brought it to their attention.”

While more candidates will be considered, she said there are five people currently in the process of interviewing with the search committee, including one African American woman, one Latino man and three white men.

The partnership hopes to have a short list of candidates for the full board to interview by February and to have a chief executive in place by early March.

The partnership also plans to issue a “request for information” from teachers, employers and advocates to learn more  about programs that already exist in the community and needs that are not being met. From that information, which is expected to be submitted next month, a partnership subcommittee will issue a public report and make recommendations to the board.

In other action, the partnership authorized Board Chair Erik Clemons to formalize a contract with Shipman & Goodwin LLP as outside legal counsel based on hourly fees ranging from $310 to $475 an hour; BlumShapiro for an estimated accounting services annual fee of $128,520; and Insperity for human resources services at about $250 an employee per month.