At pro-impeachment vigil: ‘Maybe the rest of America will see what we all see’ 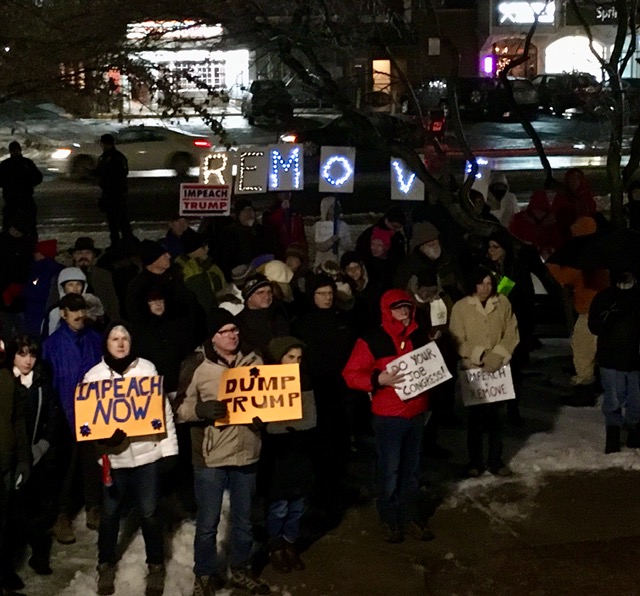 R-E-M-O-V-E was the message in lights at an impeachment eve vigil in West Hartford.

West Hartford — Sleet and freezing rain pelted them. An icy glaze made the sidewalks treacherous. And they didn’t really need to be there, not if their goal was simply to urge Connecticut’s all-Democratic congressional delegation to impeach Donald J.Trump.

But they still came, maybe 100 of them, to stand vigil Tuesday night in a semi-circle outside the town hall of this suburb, a place where more Republicans voted for John Kasich than Trump in the 2016 presidential primary and only 24% of voters chose him in the general election.

“There are rallies all over. It would be terrible if Connecticut wasn’t represented in this. That’s why I’m here,” said Linda George, a local resident. “When I saw the map, I said, ‘This is very exciting, and how can we not be represented, particularly because we are a blue state.’”

She was referring to a map that showed 600 vigils promoted by MoveOn.org around the United States, a quiet demonstration on the eve of only the third vote by the U.S. House of Representatives for articles of impeachment. Others were planned across Connecticut.

All five members of the Connecticut delegation say they intend to vote Wednesday for two articles of impeachment: One, the abuse of power relating to linking foreign aid for Ukraine to that nation’s willingness to assist Trump’s re-election; and two, the obstruction of Congress for defying subpoenas for testimony and documents.

Karyn Schwartzer of West Hartford said the vigils were aimed not at Congress, but a divided America. According to a Washington Post-ABC poll released earlier Tuesday, 49% of the nation wants Trump impeached and removed and 46% do not. Schwartzer stood outside Tuesday to reach the 46% still with the president.

“The more people that come out, maybe the rest of America will see what we all see, that we can’t set a precedence for corruption and a loss of democracy in our government,” she said. “What’s going to happen in a few years, when we have somebody else in there who is worse?”

Schwartzer knows well how divisive is the issue of Trump’s presidency, not just his impeachment. It has split her from her relatives in New Jersey, who stand with the president on everything. No conversation is safe, not even about the weather.

“The weather can bring up climate change,” she said.

Jim Chapeldelaine, a musician and activist who acted as an M.C., said he was surprised that anyone turned out in the storm. He stood at the top of the town hall steps on a landing that served as a stage.

A sole Trump supporter, a cheerful man who declined to give his name, stood off to the side with a Trump 2020 placard. He smiled and said, “I think I’m outnumbered.”

Chapeldelaine told the crowd he took no pleasure in asking Congress to remove a president.

“There are people that say we’re undoing an election. We’re not,” he said. “We’re addressing rampant, unchecked criminality, and that’s what’s happening.”

In the crowd, six people held up illuminated letters: R-E-M-O-V-E.

The vigils came as the president denounced the impeachment proceedings in a rambling, six-page letter sent to House Speaker Nancy Pelosi.

“This is nothing more than an illegal, partisan attempted coup that will, based on recent sentiment, badly fail at the voting booth,” Trump wrote. “History will judge you harshly as you proceed with this impeachment charade.”

Trump said it is Democrats who are interfering in America’s elections and obstructing justice.

Connecticut’s two Democratic senators, Richard Blumenthal and Chris Murphy, each say the record proves the president’s guilt, though they are willing to hear evidence of his innocence. But Trump and Senate Majority Leader Mitch McConnell, R-Ky., have made clear there will be little new evidence and no testimony at the Senate trial.

In a message from Blumenthal read at the vigil, he said he stands with Senate Minority Leader Chuck Schumer , D-N.Y., in “calling for a fair and full Senate trial that requires documents and witnesses.

“Trump’s actions threaten our democracy. But the greater threat would be if America became a place where such misdeeds went unpunished.” 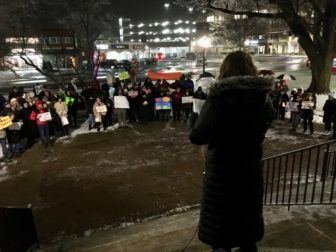 Cheri Quickmire of Common Cause tells protesters that Trump was guilty of far more than two articles of impeachment.

“He pockets money from foreign governments,” said Cheri Quickmire, the executive director of Common Cause in Connecticut. “He abuses power by interfering in the Russian investigation. He attacks the free press when they criticize him. He violated multiple campaign finance laws and has said he’ll do it again. So he has failed the oath of office and is refusing — refusing — to safeguard our elections from foreign interference. He has normalized hatred, racism and xenophobia.”

State Rep. Jillian Gilchrest, D-West Hartford, who stepped up her political activism after Trump’s election and won a legislative seat in 2018, also had her own list, whether or not they are high crimes or misdemeanors.

To each question posed by Gilchrest, the crowd joined her in loudly answering yes.

She told them to contact their representative in Congress, even if they all are on record in support of impeachment.

“We know they stand with us, but they need to hear from us,” she said. “History will look poorly on those who remain silent during this time.”