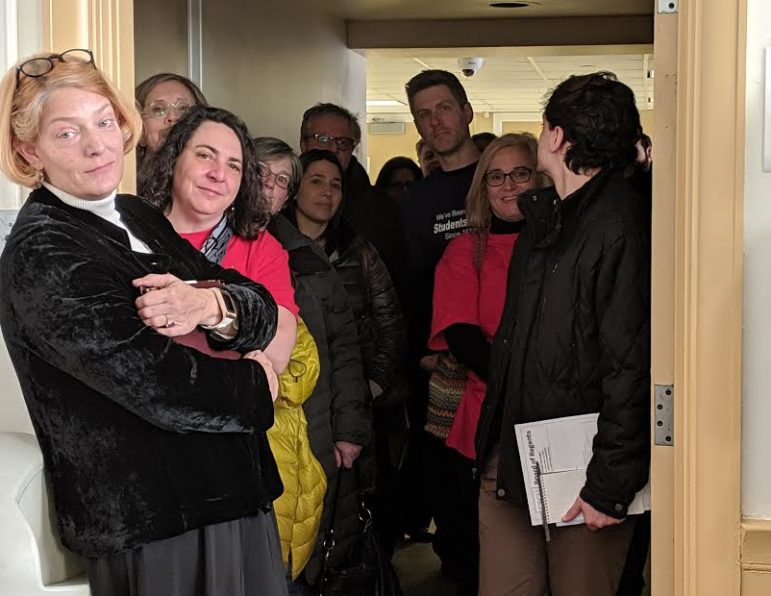 Dozens of faculty had to remain out in the hall at Thursday’s board meeting because there wasn’t enough space in the board room.

Several dozen faculty and staff members attended Thursday’s Board of Regents for Higher Education meeting to register their opposition to the plan to consolidate the state’s 12 community colleges into one single statewide college.

“We have been fighting for a couple of years to make something coherent out of this plan,” said Colena Sesanker, a philosophy professor at Gateway Community College. But faculty and professors who participate on various committees working on the consolidation are not being listened to, she said. “The plan doesn’t even seem viable. It seems harmful for students. We have been pushing for any number of things that could at least have made it better.”

She said the faculty members attending Thursday’s board meeting have been feeling that their efforts to provide input are “futile” and many, including her, are now thinking of dropping off the committees.

Another faculty member, Lauren Doninger, a psychology professor at Gateway, said “I think the way consolidation is being pursued is reckless. I wouldn’t have chosen consolidation, but I and many many others were willing, if this is the path we’re taking, let’s make it the best possible experience that we can.”

Doninger said it seems that faculty members’ opinions are not being considered and that dissent has been silenced on the committees. 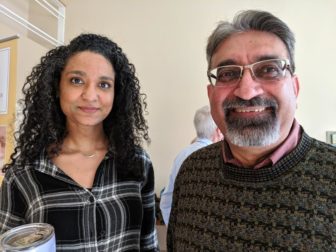 The consolidation, which is supposed to occur in 2023, has been moving forward for the past couple years. Connecticut State Colleges and Universities President Mark Ojakian, with the support of the Board of Regents, has maintained that the merger will strengthen the colleges’ precarious financial situation by saving money on administrative costs. He has said that savings will be invested to improve the  academic experience for students.

Last week, the five unions that represent faculty and staff in the CSCU system issued a statement saying they “stand united” in opposition to the consolidation plan known as Students First. It is the first time all five unions have concurred on this, including the 4C’s Congress of Connecticut Community Colleges, the American Federation of Teachers, AFSCME, the American Association of University Professors, and SUOAF-AFSCME.

A statement from the unions said the consolidation “will not realize the projected savings, will be disruptive for students, will have negative consequences on critical students outcomes, and will erode the value of the community colleges for students and for the state of Connecticut for years to come.”

Ojakian said after the meeting that he knows there continue to be “legitimate concerns about the path forward and about specifics about all of these proposals and work groups and so we’re always willing to engage in those kinds of conversations, but what matters, I think, is that we cannot accept the status quo.”

Ojakian has emphasized that the merger is vital to ensuring the financial stability of the community college system.

“Some of the folks you’ve seen here today have tried to obstruct this process from the beginning,” he said.

As part of the meeting, the board approved a resolution containing “guiding principles” and priorities for the transition to a single statewide community college, including ensuring that “students are at the center of of all decisions” and prioritizing “teaching, learning, and high-quality academic programming.” 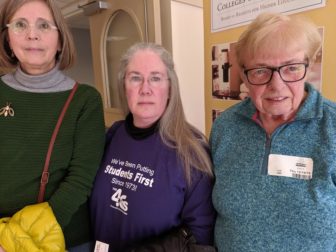 Also at Thursday’s meeting, William Lugo, a professor at Eastern Connecticut State University and a faculty representative on the board, presented a report  from the faculty advisory committee to the board that outlined opposition to the report and raised questions about the consolidated college.

The report noted that a petition signed by over 1,400 people including former community college presidents, trustees, regents and senior administrators, was presented to the the board last spring. In addition, the report said a resolution of no confidence votes in Students First, Ojakian and the board has been approved by faculty and staff governance bodies at 10 community colleges and two state universities.

The report raised 11 questions, ranging from how the consolidation will address the achievement gap in Connecticut to whether all independently accredited programs across the community colleges will be able to retain their accreditation after consolidation.

Lugo said he realized the questions could not be addressed Thursday, but asked that they be answered at some point.

Matt Fleury, the board chairman, said the questions were “really thoughtful” and added, “We’ll be taking them on …”