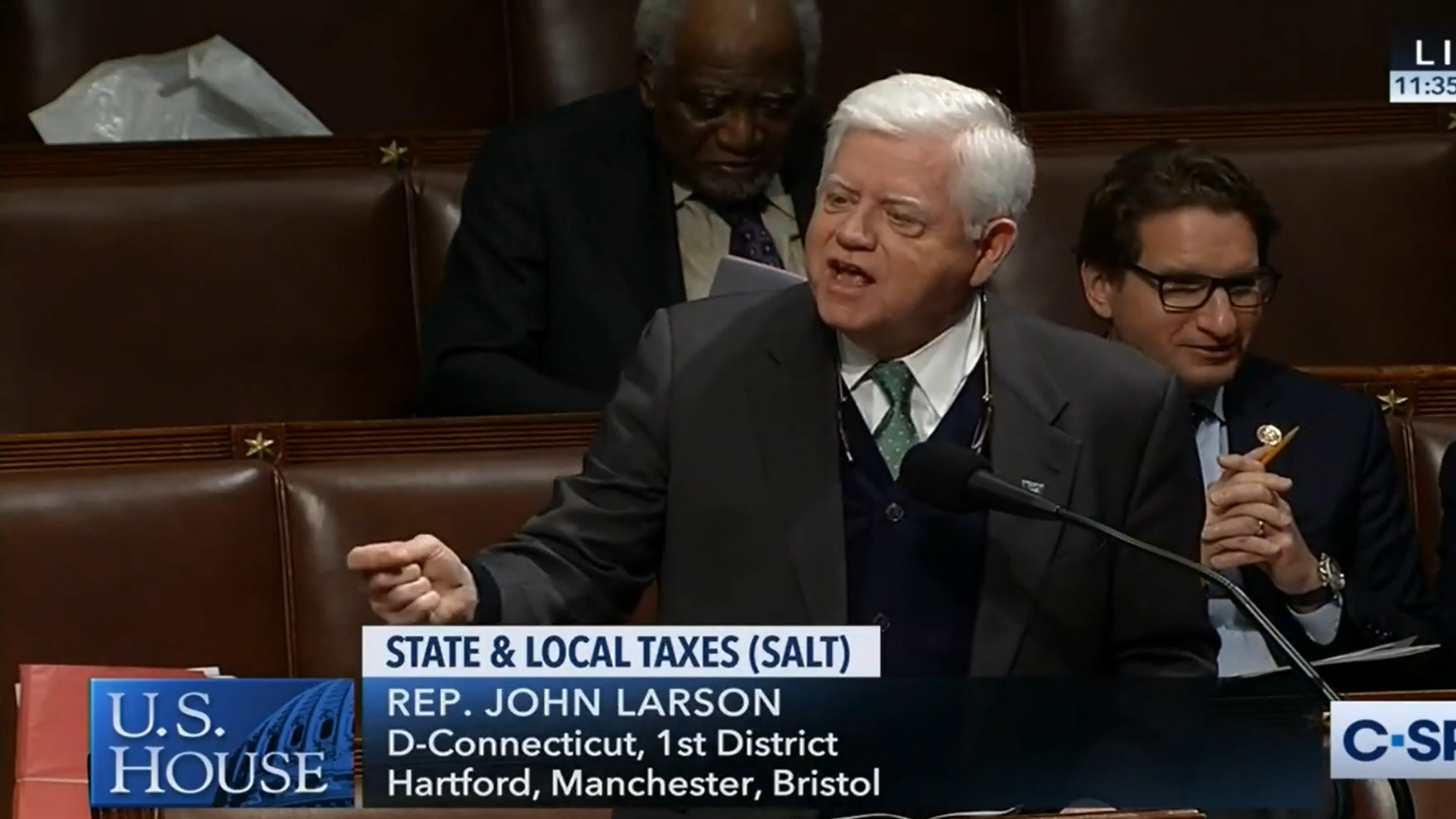 Rep. John Larson defends bill that would temporarily lift the cap on the deductibility of state and local taxes.

Washington – The U.S. House on Thursday approved a bill that would scrap for two years a $10,000 cap on the federal deductibility of state and local taxes, a limitation decried by taxpayers in wealthy states like Connecticut who have been hurt by the shrinking of the valuable tax break.

The bill’s chances of making it through the GOP-controlled Senate are slim, however, and President Donald Trump has promised to veto the bill should it make it to his desk.

Still, the legislation was a top priority for Democrats in high-cost, high-tax states like Connecticut, New York, New Jersey and California, where officials argued that the SALT deduction unfairly punishes residents of their states and will make it harder for them to provide public services. A smattering of GOP lawmakers from those states also supported the bill, sponsored Rep. Thomas Suozzi, D-N.Y.

The legislation would pay for the temporary repeal of the SALT tax by raising the top individual tax rate from 37% to 39.6%, the level it was before approval of a massive GOP tax overhaul in 2017 that also capped the SALT deduction.

During the debate on the bill,  Republicans said the repeal of the SALT tax would be an unfair boon to wealthy Americans and that states like Connecticut should behave like Republican “red states” and have lower state and property taxes.

Rep. Tom Rice, R-S.C., called the legislation a “partisan bill that would give millionaires and billionaires a tax cut and do nothing to help the middle class.”

He said the GOP tax bill has “brought prosperity among the nation” and unemployment is at an all time low for Hispanics and African-Americans.

“The cap on deductibility of SALT is more than sufficient for more than 90 percent of Americans,” Rice said. “Lifting this $10,000 cap is a plain tax cut for the rich.”

“I would love to have Mr. Rice come and visit Augie and Ray’s in East Hartford and have him talk about how billionaires are being benefited,” Larson said. “In Connecticut … we used to deduct an average of $19,000 in personal property taxes. Now we get to deduct $10,000. Why?”

Larson also said that Connecticut pays more to the U.S. Treasury in taxes than “we get in return.”

All of Connecticut’s members of the U.S. House joined Larson in supporting the bill.

“Capping the SALT deduction is an unreasonable and bad policy, it hurts working people and middle-class families who are struggling to make ends meet with rising costs, and I am glad to have voted to reverse it today,” DeLauro said. “I urge the Senate to pass this important bill.”

The federal Office of Management and Budget said in a statement that “this legislation would unfairly force all federal taxpayers to subsidize a tax break for the wealthy, as well as excessive government spending by fiscally irresponsible States.”

The White House also took issue with the provision in the bill that would raise the top individual tax rate to 39.6 percent, saying this would “would stifle economic growth by placing an undue burden on thousands of small businesses.”

Connecticut has joined New York and other Democratic-run states in challenging the cap on SALT deductibility in court.