Best of 2019: Sheff advocates celebrate 30 years while asking: Where to from here? 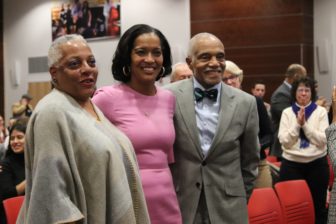 Note: This story was originally published on January 21, 2019.

About 150 supporters of the Sheff school desegregation case gathered over the weekend to celebrate the 30th anniversary of the landmark suit, but also to ask a question that echoes the theme of Martin Luther King’s last publication: Where do we go from here?

With a California-based law firm having filed a lawsuit last year that could seriously undermine Sheff, the Saturday event served as a kind of pep rally marking the strides toward integration made under Sheff, while simultaneously cautioning that those gains could be lost.

Dennis Parker, executive director of the National Center for Law and Economic Justice and a longtime member of the Sheff legal team, told the group that much has been achieved by Sheff with the establishment of more than 40 magnet schools and a “choice” program that allows Hartford students to attend schools in other districts.

But he said, “It’s still the case that more than 50 percent of students of color in the Hartford area are in segregated schools, so we continue to fight to increase the number of students who have access to greater educational opportunities. So today we are both celebrating the success of the case, but also frustrated at the pace and the extent of the remedies that have been achieved.”

Parker said the case has been further complicated by the filing of the lawsuit by the Pacific Legal Foundation, which he said “has attacked the remedy in Sheff which created these 40 plus magnets and the opportunity for choice.”

“For me one of the most vivid lessons of the past two years, starting in November, 2016, is the lesson that the things we thought we won, the victories we thought prevailed in civil rights and in other areas are extremely fragile,” Parker said. “They are not permanent. We don’t have the luxury of saying, we won this, we can move on to the next problem because those basic wins are being attacked on a daily basis by this administration and by others outside of the administration.”

The Pacific Legal Foundation, which has argued against Affirmative Action in cases across the country, filed a lawsuit last year on behalf of eight Hartford families alleging that the state’s lottery, which is used to fill the magnet schools, is discriminatory and therefore violates federal law because it is designed to limit enrollment of black and Hispanic students to 75 percent to ensure some integration.

The parents who have joined the lawsuit as plaintiffs are frustrated that seats in some high-performing magnets are going empty when not enough white students enroll.

Sheff proponents have asked the federal court to dismiss the case and are awaiting a decision.

Elizabeth Horton Sheff and her son Milo Sheff, lead plaintiffs in the Sheff case, were in attendance Saturday along with other named plaintiffs. Newly-elected Congresswoman Jahana Hayes also spoke at the event about the importance of education in her own life and about the courageousness of integration efforts. 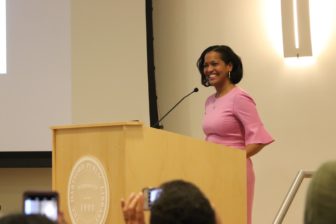 U.S. Rep. Jahana Hayes, a former national Teacher of the Year, spoke about the importance of education.

“Anyone who has heard me speak knows that I say over and over that education saved my life,” Hayes said. “I see how many people in my community that did not have that access and now do not have the same opportunities that I had.”

She said she will  “forever be grateful” for the opportunities she had.

Hayes, who was selected as the National Teacher of the Year in 2016, said she has a Norman Rockwell painting on the wall of her office in Washington that shows a young Ruby Bridges being escorted to school by federal marshals. She spoke about the bravery of a mother allowing her child to be on the frontlines of integration.

“It really reminds us that these parents believed that what was on the other side of the door was better for her,” Hayes said. “I don’t know if I could have done that as a mom.”

While much progress has been made in the 52 years since Rockwell painted Ruby, Hayes said the painting also reminds her that the work is not done.

“It’s not supposed to be done,” Hayes said. “If anyone thinks that we will ever get it right and then we stop — they are sadly mistaken because we have a responsibility to respond to the time and the generation that we are in and keep making sure that things get better.”

Several students who have benefited by the establishment of Sheff magnets also spoke up during the event.

Javon Griffin, who grew up mainly in Hartford and now lives in Windsor, said that he attended a predominantly black school in Hartford.  “Everybody around me looked like me and it felt comfortable but I didn’t know what it was like to meet somebody who was white,” Javon said.

But when he enrolled at the Academy of Aerospace and Engineering magnet school, he said, “I finally had an introduction to people whose lives were not like mine… ”

Javon, who is a sophomore, said he’s met many people from other cultures and ethic backgrounds and has appreciated that opportunity. “The way I see it, this school has a better educational system,” he said. “I feel like it means the world to a lot of kids.”

Sabrina Porter, a junior from Granby who also attends the the Academy of Aerospace and Engineering, said she had also been attending a school where the students all looked like her.

“Coming to AE was a major culture shock for me,” she said. “At first I didn’t enjoy it, but coming to AE has been one of the greatest experiences of my life. I meet so many different teachers and students from all different walks of life. It’s changed my perspective on so many things and I’m incredibly grateful.”