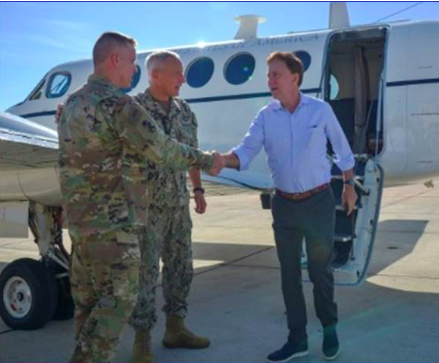 His office declined to say if Lamont toured the controversial detention camps on the base.

The National Guard has refused to say whether the unit has been on duty at the detention facilities established in 2002 by the administration of President George W. Bush to hold enemy combatants and others captured in the war on terror.

From a high of about 245 prisoners, the detention camps now hold 40 prisoners, with no immediate plans for closure. According to the New York Times, 14 prisoners are men previously held by the C.I.A. at one or more secret sites overseas. Those prisoners are segregated at a building called Camp 7.

According to disclosures made in court proceedings, most or all of the other 26 prisoners are being held at buildings called Camp 5 and Camp 6.

The governor’s office declined Friday to describe the Guard unit’s duties in Cuba. The governor said in an emailed statement he wished to thank the personnel for their service away from home.

“Deployment means many months away from families, friends, and personal responsibilities,” Lamont said. “They are missing birthdays, anniversaries, and holidays. It was important for me to tell them they are appreciated, they are not forgotten, and we can’t wait to welcome them back home to Connecticut.”