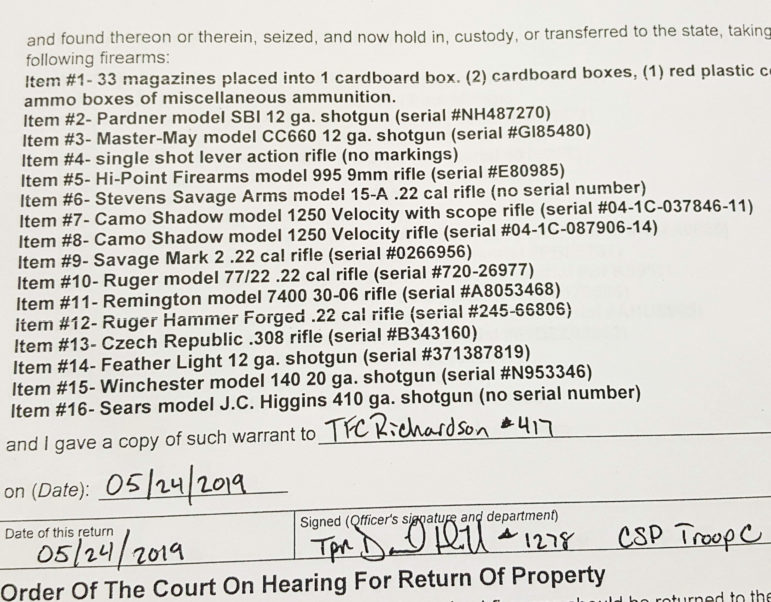 The inventory of firearms seized by police under the warrant issued in the Olden case.

Note: This story was originally published on August 13, 2019.

Co-workers were concerned after Justin Olden, a Stafford public works employee, told them there would be “a mass shooting” if he continued to be reassigned to jobs outside the municipal garage.

The co-workers were aware Olden owned guns and called the Stafford Police Department, which sought a risk warrant from a court to seize 18 rifles, shotguns and other weapons from his home.

State police were able to remove Olden’s guns from his home because Connecticut enacted a law 20 years ago — the first in the nation — aimed at preventing people from hurting themselves or others.

But now there are questions of whether Connecticut’s law is tough enough.

The popularity of risk warrants, also called extreme risk protective orders, or “red flag” laws has increased with the rise of mass shootings in the nation and are now at the center of a public debate in Washington on how to respond to the recent massacres in El Paso, Tex. and Dayton, Ohio, which claimed 31 lives.

The number of states that adopted red flag laws surged after the Valentine’s Day, 2018 shooting in Parkland, Fla., that killed 17 students at Marjory Stoneman Douglas High School. Ten states adopted red flag laws after that massacre and there was an attempt, which failed, to pass a federal extreme risk protective order law that offered grants to states who enacted those laws. 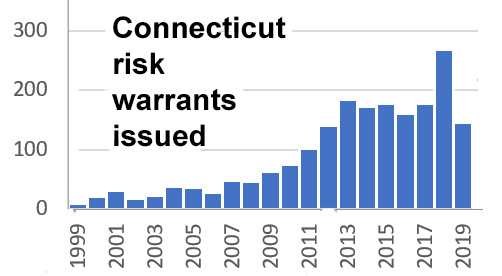 Connecticut approved its red flag law after a disgruntled accountant with the Connecticut Lottery Corporation used a 9mm Glock pistol and a knife to murder four co-workers before shooting himself in the head. The shooter, Matthew Beck, had previously attempted suicide and was being treated for depression.

According to the risk warrant issued May 24 to confiscated Olden’s guns, one co-worker thanked Olden at the end of the day for his help mowing the grass at the town’s cemeteries in preparation for Memorial Day. The co-worker said Olden replied “Yeah, if they keep moving me around, there will be a mass shooting.” Two other co-workers also spoke to police about what they characterized as Olden’s disturbing behavior that day.  One said Olden had once told him he had caught a man sleeping with this wife and put a gun to that man’s head.

According to Connecticut law, Olden had a right to a court hearing to request the return of his weapons within 14 days of their seizure. But the case was postponed until this week and continued by a Tolland County Superior Court judge, so no decision on whether to return his weapons will be made until at least Sept. 3. Neither Olden nor his attorney responded to requests for comment.

The Duke study concluded that Connecticut’s law has prevented dozens of suicides and probably numerous homicides. The number of risk warrants issued has increased over time, especially since 2010, but state court officials could not say why.

But despite the successes of Connecticut’s red flag law, the study of its risk warrant policy found “there are significant barriers to carrying out these gun removal actions at the policing level, which hampers broader implementation of the statute,” and that an average of only 50 guns a year had been removed since the law was first enacted in 1999.

The study said most law enforcement agencies in this state have fewer than 40 officers and that is often difficult for a municipal police force to spare two officers to seek a risk warrant.

Other state laws are broader.

According to the Giffords Law Center to Prevent Gun Violence, 12 states allow family or household members as well as law enforcement officials to submit a petition for an extreme risk protective order and Maryland and the District of Columbia also allow mental health providers to petition.

New York also allows school administrators to petition and Hawaii allows medical professionals, coworkers, and educators to petition. Only three states, including Connecticut, limit the category of petitioners to law enforcement only.

Connecticut’s law also limits risk warrants to be issued only to those who own guns. Other states allow them to be issued to prevent gun sales to anyone believed to be a risk to themselves or others.

“If there are any modifications we can make that would strengthen its effectiveness and prevent more needless tragedies, the governor is certainly open to suggestions,” said David Bednarz, spokesman for Gov. Ned Lamont.

Bednarz also said “we are proud that Connecticut became the first state in the nation with a red flag law, and in the two decades since its implementation numerous other states have looked to our statutes as a model for reasonable gun safety laws that work. It has not only been proven to be constitutional, but it has saved lives,” he said.

Jeremy Stein, executive director of Connecticut Against Gun Violence, said his organization is constantly monitoring the effectiveness of gun laws in the state and would seek changes in its red flag law if warranted.

“I’m open to changing the law to make it more effective,” he said. “But the Duke study shows one thing: this saves lives.”

To Stein, a greater benefit is to broaden public knowledge of the existence of Connecticut’s risk warrant law, so that it is applied more often.

The Duke study found that an estimated nine percent of adults in the United States have problems with impulsive, angry behavior and have access to firearms at home, but fewer than 10% of these angry, impulsive, gun-possessing adults have ever been hospitalized for a mental health problem.

That means that most of these angry gun owners would have never lost their gun rights by dint of a mental health-based restriction.

The study also found that 92 percent of gun removal subjects are male. Of those whose marital status was known and reported, 81% percent were married or cohabiting. Five percent were military veterans and 31 percent of these veterans had been deployed in the year before gun removal.

The shootings in El Paso and Dayton have renewed discussions of a federal red flag law. President Donald Trump indicated he would support the legislation. But Trump also said he’d support a federal red flag law last year, after the slaughter in Parkland, Fla., and the initiative fell victim to the resistance of GOP lawmakers.

A draft of the legislation has not yet been released, but Senate Minority Leader Charles Schumer, D-N. Y., has called the effort a “tepid” response to the nation’s gun violence crisis and said it’s voluntary approach “runs the risk of doing more harm than good in the long run if states decide to take up weaker laws.”

Laura Cutilletta, managing director of the Giffords Law Center, said red flag laws must be enacted by states because federal courts are not set up to issue risk warrants. Still, she said her group is advocating for the toughest federal red flag legislation possible.

“We absolutely will be watching to make sure any be that is moved is going to have significant impact,” Cutilletta said. “If not, it will just be lip service.”