From prison to the grave

Former inmates now account for more than half of all drug overdose deaths in Connecticut. 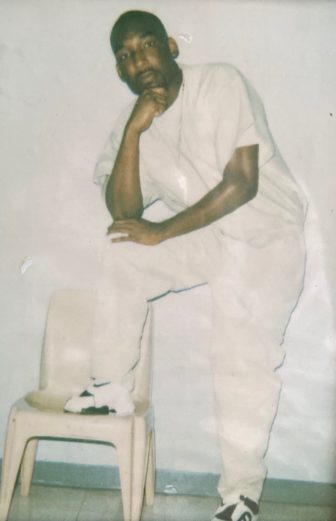 Daryl McGraw, shown here in prison, landed behind bars repeatedly during the years he was addicted to drugs. He has been out of prison and drug-free for 12 years.

Things were going well for Daryl McGraw in 2007. He had a good job at a hotel, a car and a place to live. But all that success became a trigger, and he eventually succumbed to the crack cocaine and marijuana addiction that had put him in prison roughly seven times since the early 1990s.

McGraw did drugs on the job and got arrested for violating his probation. Then he got fired.

“There [were] always those times of getting out of prison and thinking I had it together and picking up, or thinking I could successfully use, and end up being back in prison,” said McGraw, who was released from prison in 2010 and has been clean now for 12 years. “By the grace of God, I didn’t die, like many people have.”

“By the grace of God, I didn’t die, like many people have.”

McGraw is not overstating the problem. Accidental drug overdose deaths tripled in Connecticut between 2010 and 2018, with the proportion of overdose victims with prior involvement in the criminal justice system slowly increasing during that time. 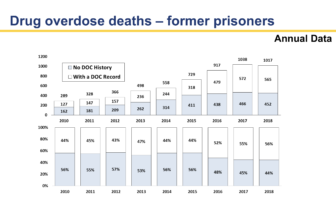 Officials with the Office of Policy and Management’s Criminal Justice Policy and Planning Division discovered the uptick in drug deaths among former inmates when examining data from the Office of the Chief Medical Examiner and the Department of Correction.

While the data shows an overlap between criminal justice involvement and overdose deaths, many details are still missing.

While officials believe the majority of the overdose deaths are from fentanyl, for example, OPM did not specify this in its analysis. There has been a dramatic increase in fentanyl-related deaths statewide over the past half-decade, according to the Office of the Chief Medical Examiner. Of 1,017 opioid deaths last year, 75% involved fentanyl. In 2012, fentanyl deaths accounted for 4% of the total.

There are other unanswered questions, as well.

“We don’t know whether they were admitted pretrial or served a sentence,” said Marc Pelka, Gov. Ned Lamont’s undersecretary of criminal justice policy and planning. “We don’t know how soon after their release they experienced an accidental drug overdose death.”

Pelka said his office likely would do a deeper dive into the data to learn more about the intersection between arrests and overdose fatalities. Even without that detail, however, the data is startling, officials said.

“I hope that this whole commission really understands what this shows. Because I’m seeing this come across my desk every day,” Department of Correction Commissioner Rollin Cook told his colleagues on the Criminal Justice Policy Advisory Commission during a recent presentation on the data. Cook said one of his jobs is to sign off on investigations into overdose deaths of people who have been released from prison but are still under state supervision.

Those reports, Cook said, often show the overdose victims were attending recovery programs and adhering to the terms of their parole.

“They’re doing everything they’re supposed to do,” he said. “Yet we’re still losing them. They’re dying.”

“They’re doing everything they’re supposed to do. Yet we’re still losing them. They’re dying.”

“Any upticks are directly associated with fentanyl,” said Mark Jenkins, the founder of the Greater Hartford Harm Reduction Coalition.

Fentanyl was a factor in nearly 80% of Connecticut’s overdose deaths in 2018, but more than half of those involved at least one other drug, including cocaine, heroin and methamphetamines.

Drugs change over time. That makes it easier for people to overdose who haven’t been on the street for a while because they’ve been locked up.

“You don’t know what you’re getting now,” McGraw said. “There’s people that are overdosing from crack because somehow their crack had fentanyl in it.”

The overlap between criminal justice system involvement and addiction makes sense to Louis Reed, an organizer for the national criminal justice reform group Cut 50. Criminal records function as scarlet letters, making it hard for people to secure housing or land jobs even after their sentences have ended.

“The moment they get a door slammed in their face they most likely are going to go right back to what it is they felt was more comfortable to them,” Reed explained. 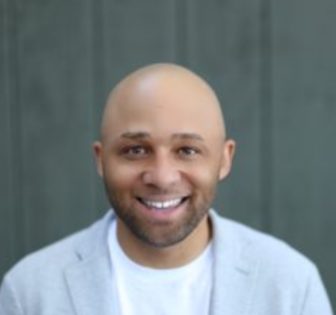 Louis Reed, an organizer for Cut 50.

Using drugs after a long period of sobriety while incarcerated also poses problems, said Reed. Tolerances decrease when people don’t use for a while. That puts them at risk of an accidental overdose because their first hit “shocks their system.”

During the last legislative session Gov. Ned Lamont allocated money to expand the use of medication-assisted therapy in prisons. But, McGraw said, that’s only one piece.

Access to treatment and rehabilitative services are key. If there aren’t programs in place to help people in recovery, Reed said, “essentially what’s going to happen is we are going to create more of a trap door to failure more than we’re going to create a springboard to success.”

The uptick in the percentage of former prisoners among overdose victims is particularly notable because Connecticut’s prison populations and crime and arrest rates are down. Still, it’s not especially surprising to Jenkins, who spends each day on the front line fighting addiction and saving the lives of people who’ve overdosed.

“Who’s getting arrested?” he asked, pointing to a measure lawmakers passed last session that increases penalties for the sale of fentanyl. Laws like that, he said, disproportionately affect people suffering from addiction who live in cities, who are more likely to be racial and ethnic minorities.

“They’re not getting the high-level drug dealers,” Jenkins said of cops arresting city residents for selling fentanyl. “They’re getting guys, oftentimes, who are dealing to support a habit.”

The criminalization of addiction, similar to racial disparities in arrests for crack and powder cocaine, could be partially responsible for the increase, Jenkins suggested. If more people with addiction are entering the system, it follows that there would be an increase of former prisoners among those who died from an overdose. 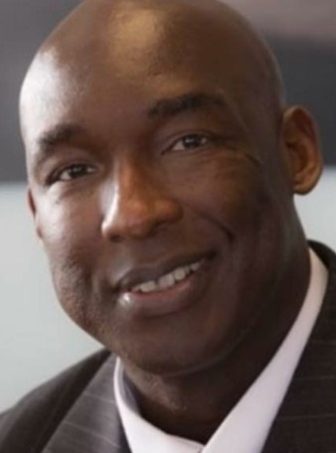 Daryl McGraw today. He founded an organization that mentors men in the criminal justice system.

McGraw, the founder of an organization that provides mentoring to people in the criminal justice system, proposed a “three-legged stool” to address overdose deaths of former prisoners. The first leg is the community, which he said has to be prepared for the individuals being sent home. The next is more communication between the Department of Correction and the Department of Mental Health and Addiction Services, the latter of which he served as the director of Recovery Community Affairs for four years. The final leg is the individual who must work the recovery programs and participate in after care once they’re released.

His efforts are personal. “I’ve lost a lot of friends to addiction,” McGraw said. “They give up. One too many doors shut in their face, and they end up picking up.”

Last year, McGraw lost a friend shortly after he had finished a two-year sentence.  Distraught after losing his job because he mouthed off to a supervisor, McGraw’s friend started using opioids and overdosed. He hadn’t even been free a year.

Remembering his friend’s death, McGraw described his relapse similar to how he’d described his own, the last time he used, in 2007.

“This was a guy who thought he had it all together.”