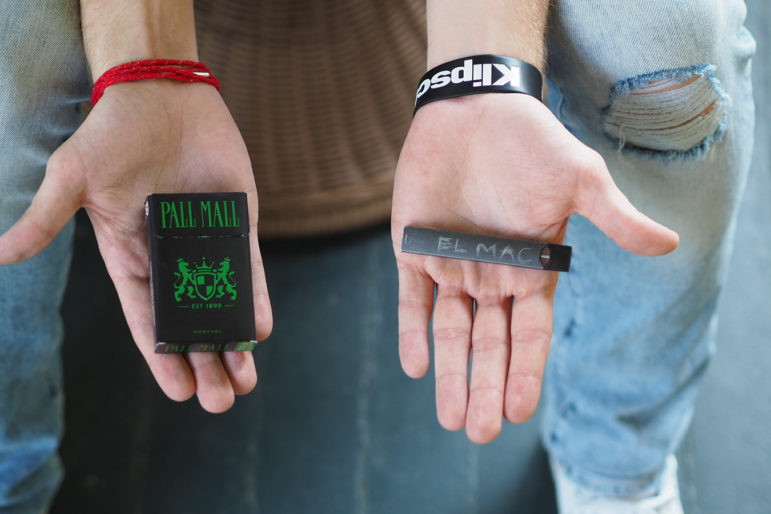 The state’s public health department has asked lawmakers to take up a prohibition on flavored vaping products in February.

Despite a federal prohibition announced Thursday on certain flavored vaping products, leaders at the state’s public health department are asking the General Assembly to ban all fruit, candy and menthol flavored tobacco goods in Connecticut during the upcoming legislative session.

Barbara Walsh, a program manager at the state’s health agency, recommended that legislators take up the issue when the session begins on Feb. 5. The proposal is backed by Renee D. Coleman-Mitchell, Connecticut’s health commissioner.

“Flavored tobacco products were developed by the tobacco industry as a way to mask the harsh taste of tobacco, and make the product more appealing to children and youth,” Walsh wrote in her recommendation, posted on the state Office of Policy and Management’s website. “Eliminating flavors in all tobacco products, including [e-cigarettes] and vapor devices, will help to prevent additional and future youth initiation.”

The Food and Drug Administration issued a ban Thursday on flavors in cartridge-based e-cigarettes, with the exception of menthol and tobacco. The ban exempts large, tank-based vaping devices, which are primarily sold in vape shops that cater to adult smokers.

The new policy will preserve a significant portion of the multibillion-dollar vaping market. And the changes are likely to please both the largest e-cigarette manufacturer, Juul Labs, and thousands of vape shop owners who sell the tank-based systems, which allow users to mix customized flavors.

They did not, however, satisfy health officials, lawmakers and advocates, who said the partial ban won’t address the scope of the problem.

Av Harris, a spokesman for Connecticut’s public health department, said Thursday that the agency had no plans to withdraw its flavor ban proposal. Stricter bans on flavored tobacco products can still prevail at the state and local levels, he noted.

The health department submitted its recommendation weeks ago.

“Our position is the same – that flavors for nicotine delivery devices make it easier for young people to start nicotine habits that lead to a lot of adverse health outcomes,” Harris said. “We still think it’s a good idea to not have flavored nicotine delivery devices that can make it fun for young people to get involved, or to have flavors that mask the harsh taste of nicotine or combustible tobacco. It’s still a way to lure young people into a really bad habit, and we don’t think it should be allowed.”

“There is no guarantee that a federal ban will continue, given recent comments by the President, so we should have a statewide ban on non-tobacco flavors in tobacco products.”

Sen. Mary Daugherty Abrams, a co-chair of the legislature’s Public Health Committee, said there is still work to do at the state level.

“I am encouraged by the FDA’s decision, but there is further room for Connecticut leaders to act and protect public health,” she said. “There is no guarantee that a federal ban will continue, given recent comments by the President, so we should have a statewide ban on non-tobacco flavors in tobacco products.”

Asked earlier this week about the prospect of a federal flavor ban, Trump told reporters that “we have to protect our families. At the same time, it’s a big industry. We want to protect the industry.”

E-cigarette manufacturers face a court-ordered May deadline for submitting product applications to the FDA. Companies that don’t submit applications could have their products forced off the market. But those removed from the market in coming months under the ban could return if their applications are approved.

The FDA must conclude that the products, which so far have been lightly regulated, provide a net public health benefit. “Hopefully, if everything is safe, they’re going to be going very quickly back onto the market,” Trump said.

“The FDA’s decision to abandon its announced plan to clear the marketplace of all flavored e-cigarettes, including menthol, is unconscionable,” said Gary Reedy, the group’s CEO. “Instead of moving forward with an effective proposal that could have a meaningful effect in curbing the youth e-cigarette epidemic, we once again have a hollowed-out policy that will allow the tobacco industry to continue to attract kids to a lifetime of nicotine addiction.”

Congresswoman Rosa DeLauro called for a broader prohibition on vaping flavors, saying the partial ban would “undermine our federal government’s ability to protect our youth.”

Pressure to pass reform at the state level ramped up after the Trump administration backed away from its pledge in November to outlaw flavored vaping products nationwide, prompting anti-tobacco advocates to call on lawmakers in Connecticut to take action.

In September, as hundreds of people across the country contracted a mysterious lung disease linked to vaping, Trump announced from the Oval Office that he would pursue a ban on most flavored e-cigarettes.

The plan would have pulled flavored vaping products, including menthol, from the market. The flavors would not have been allowed back without specific approval from the Food and Drug Administration. Officials at the time said the policy was being finalized and that it probably would go into effect a month later.

“The debate on flavors is going to continue because the dangers of vaping have proven to be deadly.”

But in November, the president backed off his proposal, saying he didn’t want to move forward because he feared the prohibition would lead to job losses. He also warned that a flavor ban could spawn more counterfeit vaping products. White House and campaign officials said Trump balked because he worried that angering vape shop owners and their customers might cost him at the polls.

In her recommendation to lawmakers, Walsh mentioned the outbreak of lung disease and pointed to national figures showing an increase in teen vaping.

“Data from the 2013-2014 Population Assessment of Tobacco and Health (PATH) study found that 80.8% of 12-17 year-olds who had used a tobacco product initiated utilizing a flavored product,” she wrote. “At least two-thirds of youth reported using that product ‘because they come in flavors I like.’”

Walsh singled out menthol in her proposal. The flavor “facilitates early initiation of tobacco products, increases the risks of addiction, and makes cessation more difficult, especially among black smokers,” she noted.

Nationally, more than one in four high school students use e-cigarettes, according to federal data. Among that group, 27.5% reported vaping during the previous 30 days, up from 20.8% in 2018, preliminary results from the Centers for Disease Control and Prevention’s annual National Youth Tobacco Survey show. Fruit, menthol and mint were the most popular flavors, with more than 60% of teens who vaped saying they used them.

Legislators in Connecticut have vowed to explore barring the sale of flavored tobacco and vaping products during the 2020 session.

“It’s a health issue. We need to get rid of it,” Senate Minority Leader Len Fasano, R-North Haven, told The Mirror in November. “I don’t think it’s going to shut down those 24-hour gasoline stations. They sell a lot of different things. I just think it is a sin, what’s happening to our kids.” 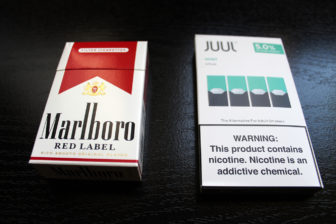 Nationally, more than one in four high school students use e-cigarettes, according to federal data. Fruit, menthol and mint were the most popular flavors, with more than 60% of teens who vaped saying they used them.

Lawmakers debated the issue in 2019, but held off on imposing a flavor ban. Concerns raised at the time, including that some people rely on the vaping flavors to help them quit smoking or that a prohibition would drive more people to buy goods on the unregulated marketplace, are likely to resurface.

“If we ban flavors, but Montana doesn’t and you go on the internet and order it – can you really prevent that?” House Majority Leader Matthew Ritter, D-Hartford, said. “These are the kinds of things that are always easier when they’re regulated at the federal level, but that doesn’t mean Connecticut can’t be a leader and take a look at it.”

There are also financial implications. While examining the issue last year, state officials estimated they would need to spend about $525,000 more annually for enforcement. Fiscal analysts projected revenue from violations to be $60,000 during the first year and $30,000 in the second year after the law took effect.

There also would be an unspecified loss in tax revenue from the banned products, though officials at the state’s public health department pointed out that vaping and tobacco use have driven up the cost of health care. Walsh said estimates show that tobacco is costing Connecticut more than $2 billion per year.

That has added some urgency to Connecticut’s effort.

“The debate on flavors is going to continue because the dangers of vaping have proven to be deadly,” Ritter said.

This story was updated Thursday afternoon with breaking news of a federal ban on certain flavored vaping products and comments from state officials.