The wreckage left near Baghdad Airport after the U.S. drone attack.

Washington – Connecticut’s lawmakers joined their Democratic colleagues Friday in questioning President Donald Trump’s reasons for killing Iranian General Qassem Soleimani. Warning of reprisals and the possibility of regional war,  they demanded the president explain his actions and receive authority from Congress before escalating the conflict. 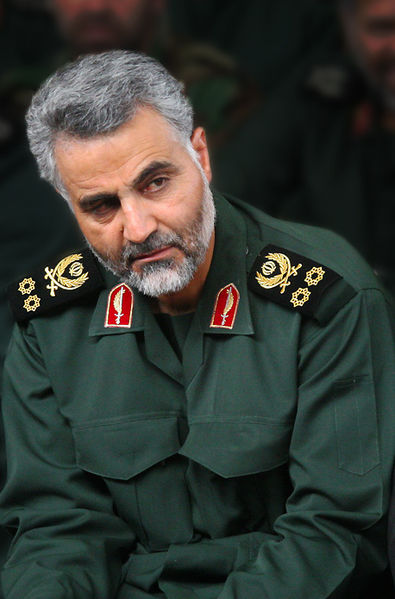 “I am deeply concerned about the dangers of a long-term military confrontation with Iraq,” Sen. Richard Blumenthal said at a press conference in Hartford with Sen. Chris Murphy.

The U.S. airstrike that killed Soleimani, widely seen as the second most powerful — and perhaps most popular — figure in Iran, has sharply divided lawmakers concerned that a major escalation of tensions with Iran was undertaken without first alerting Congress.

Trump said the early-morning drone attack that killed Soleimani was necessary because the Iranian commander was planning massive attacks against U.S. personnel in Iraq and throughout the Middle East.

“Soleimani was plotting imminent and sinister attacks on American diplomats and military personnel, but we caught him in the act and terminated him,” Trump said on Friday afternoon.

He called Soleimani “the number one terrorist in the world, and said ” for years, the Islamic Revolutionary Guard Corps and its ruthless Quds Force — under Soleimani’s leadership — has targeted, injured, and murdered hundreds of American civilians and servicemen. ”

“It should be clear to Iran that President Trump will not sit idly by if our people and interests are threatened,” said Sen. Lindsay Graham, R-S.C.

But Democrats said the air strike took the nation one step closer to war with Iran and put the U.S. in peril. Iran’s Supreme Leader Ayatollah Ali Khamenei said “severe revenge awaits the criminals” behind the attack.

“The unilateral decision by President Trump to strike down a bad actor such as Soleimani unfortunately does not close the book on the threat Iran poses to America,” said Rep. Joe Courtney, D-2nd District, in a statement.

Courtney, a member of the House Armed Services Committee, said “not consulting with the American people, congressional leadership and our allies before taking this escalatory action in a part of the world where we have been entangled for 18 long years is the wrong way to isolate Iranian bad behavior and wind down our involvement in the Middle East.”

Rep. Rosa DeLauro, D-3rd District, said she is concerned the air strike will result in a new regional conflict. “The actions authorized by President Trump may have accomplished their tactical objective, but I am deeply concerned by the ripple effects this attack may have by destabilizing the region,” she said.

Blumenthal, a member of the Senate Armed Services Committee, said the United States should “take immediate action to protect our security abroad and at home.”

Murphy, a member of the Senate Foreign Relations Committee, agreed “the worry is that action [Trump] took is going to precipitate attacks on the United States.”

Democrats insisted the president did not have authority to escalate the conflict in an act that Rep. John Larson said was “tantamount to an act of war.”

Trump, however, said ” We took action last night to stop a war.  We did not take action to start a war. ”

The president also said the United States has “the best military by far, anywhere in the world,” and “the  best intelligence in the world. ”

“If Americans anywhere are threatened, we have all of those targets already fully identified, and I am ready and prepared to take whatever action is necessary,” Trump said .”And that, in particular, refers to Iran.”

Democrats say the Authorization for Use of Military Force, or AUMF, that Congress approved in 2002 to authorize the war against Iraq does not extend to aggression against Iran. “There is no war authorization against the state of Iran,” Murphy said.

Blumenthal said whether Trump had authority for the air strikes is debatable. “But the question of war with Iran is not debatable.”

Larson, D-1st District, said “the president has the power to use his executive authority for limited strikes; however, only Congress has the sole power to declare war.”

Rep. Jim Himes, D-4th District, a member of the House Intelligence Committee, tweeted “the Constitution vests Congress, and only Congress, with the decision to go to war.”

Since assuming office, Trump has taken a hard line against Iran, withdrawing from a nuclear deal negotiated with Tehran by former President Obama.

Hostilities had increased recently. An American contractor was killed and four military members were injured in Iraq last week. A U.S. strike killed 25 members of an Iranian-backed militia and injured more than 50 people in Iraq, provoking violent protests outside the U.S. Embassy in Baghdad.

Secretary of State Mike Pompeo echoed the president on Friday, saying “there was, in fact, an imminent attack taking place.”

“He was actively plotting in the region to take actions – a big action as he described it — that would have put dozens if not hundreds of American lives at risk. We know it was imminent,” Pompeo told CNN. 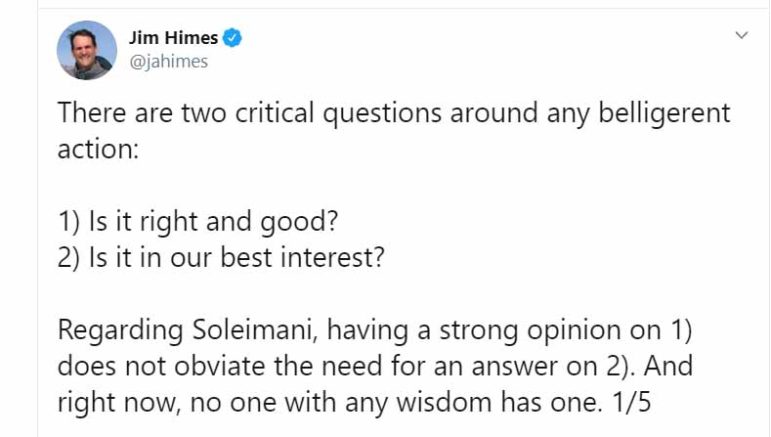 Himes, however, warned of the consequences of killing Iran’s top military commander.

“If you think taking out bad guys is its own justification, you need to reflect on the chaos that followed our destruction of (Saddam) Hussein and (Muammar) Qaddafi, neither of whom commanded nation-states when they died,” Himes tweeted.

Democrats are insisting the Trump administration brief Congress immediately about the reasons for the air strike and several said they were ready to return to Washington immediately for those briefings.

“Only (Trump) can justify this attack on a leader of a sovereign nation,” Blumenthal said. “We don’t know the motivation.”

Larson said “Congress should come back in session immediately to be briefed. The gravity of this should give everybody pause,” he continued, “as this airstrike is tantamount to an act of war against Iran,” the Democrat said.

Murphy said he is also concerned the air strike would “push our allies away from us.” The British and German governments have called for a de-escalation of the conflict.

“Where are our allies as we move forward?” Blumenthal asked.