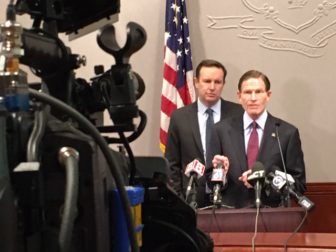 The complicated politics of criticizing a commander in chief during a military crisis were evident Friday as Connecticut’s two Democratic U.S. senators sharply questioned the wisdom of the U.S. killing Iran’s top military commander, while avoiding any suggestion the attack was influenced by domestic politics on the eve of an impeachment trial.

In a joint press conference in Hartford, Sens. Richard Blumenthal and Chris Murphy carefully navigated questions about a political motivation for President Donald J. Trump to order the death of Gen. Qassem Soleimani, focusing instead on the legal and strategic soundness of assassinating the military leader of a nation not at war with the U.S.

“For the time being, I’m going to take the administration at its word that they believe there were imminent attacks against the United States,” Murphy said. “Obviously, with this president you have to worry about ulterior motives. He has made it clear that he is willing to use the national security tools at his disposal in order to advance his personal political priorities. That is in fact the subject of the impeachment trial.”

“I can’t know the motivation, but I can see the ramifications, the very dangerous potential ramifications in war, in attacks on Americans, terrorist activities that directly imperil the United States,” Blumenthal said. “And all of those concerns would be as grave and urgent even without an impeachment trial coming.”

The two senators were quick to say that Soleimani was responsible for terrorist attacks and was an  enemy of the U.S., but they challenged the assertion of Secretary of State Michael Pompeo that killing Soleimani made “the world a safer place today,” archly noting that Pompeo in the next breath urged Americans to flee Iraq and steer clear of the U.S. embassy. 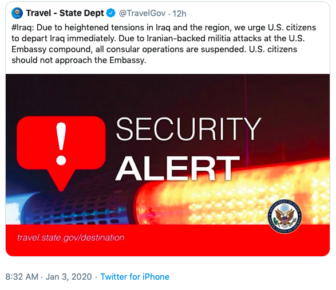 Murphy, a member of the Senate Foreign Relations Committee and frequent critic of what he calls Trump’s seat-of-the-pants approach to foreign policy, questioned whether the Trump administration is only inviting more reprisals for killing Soleimani, something the previous two administrations saw as too risky.

“It is shocking to know that the United States has engaged in the assassination of a high-level foreign official, despite the fact that he unquestionably is responsible for the death of hundreds of Americans,” Murphy said. “The question we have to be asking ourselves today is whether Qassem Soleimani is more dangerous to the United States alive or dead as a martyr who will now rally the Iranian government and Iranian proxies around the region to do even greater harm to American interests.”

Alex Plitsas, a Republican activist in Connecticut with Army Special Operations experience at the Pentagon and in combat, said the killing of Soleimani was legally justified by his position as leader of the Islamic Revolutionary Guard Corps, which has been designated by the U.S. as a terrorist organization. But, Plitsas acknowledged, Soleimani also is the second most powerful leader of a sovereign nation.

“It’s certainly a complicating factor,” Plitsas said. “I think that’s a reason the two previous administrations have made as reasons not to strike, but he’s become more brazen.”

Plitsas said questions raised by Murphy, Blumenthal and others about whether the attack is part of a larger coherent strategy are valid to raise.

But J.R. Romano, the Republican state chairman, cast the questions as pure politics and suggested that anything less than an unvarnished condemnation of Soleimani will carry an eventual political price, even in blue Connecticut. And the state party tweeted a suggestion that Murphy, who is bigger presence on Twitter than Blumenthal, just “be quiet.”

Ramifications of the U.S. invasion of Iraq under President George W. Bush in 2003 figured prominently in Murphy’s election to Congress in 2006 and indirectly to the U.S. Senate in 2012. Murphy was one of two Connecticut Democrats who unseated Republican congressional incumbents in 2006, capitalizing on the unpopularity here of both the war and Bush.

The same year, Sen. Joseph I. Lieberman lost a Democratic primary over his support of the war, retaining his seat as an independent. With no path to a nomination by a majority party in 2012, Lieberman retired and Murphy won the open seat.

Murphy and Blumenthal spoke Friday at a press conference originally called to discuss the coming impeachment trial in the Senate over whether Trump withheld U.S. military aid to Ukraine in a bid to pressure it to help his re-election by investigating the Democratic frontrunner, former Vice President Joe Biden.

Instead, they fielded a potent mix of queries about the prospect of war with Iran, the president’s duty to brief the Congress about the drone-fire missile strike that killed Soleimani as he arrived at the Baghdad airport in Iraq, the legality of the attack, and whether the crisis should impact the impeachment trial.

“There is no choice involved as to whether or not we hold a trial and come to a conclusion on the articles of impeachment,” Murphy said.

Both senators said the briefing to Congress on the missile strike should come as soon as possible, conducted by Pompeo, Defense Secretary Mark Esper and CIA Director Gina Haspel.

“Congress has a job to do here. Our job is oversight,” Blumenthal said. “We need to effectively demand from the administration all of the facts and the truth, which so far has not been forthcoming about the rationale and the strategy, if there is one, and what are the preparations for the path ahead.”

Blumenthal said most, if not all, of the briefing should come in sworn testimony conducted in public. Too much of the closed-door security briefings to Congress is material well-known to the intelligence agencies of America’s adversaries, he said.