Surrounded by his parents, his wife Natalie Elicker, and his daughters, Elicker takes the oath of office administered by U.S. District Court Judge Victor Bolden, a former city corporation counsel.

Justin Elicker has taken the oath of office as New Haven’s 51st mayor with an inauguration — and with symbolic gestures — promising an era of change.

It was left to the participants of last Wednesday’s event to fill in the blanks about what “change” will mean.

Over 500 people filled Hillhouse High School’s auditorium for the noon event to watch Elicker, City/Town Clerk Michael Smart, Board of Education President Darnell Goldson and the 30 members of the Board of Alders get sworn in for two-year terms.

Like previous inaugurations, this one was choreographed to represent New Haven’s diversity. African-American and Latina Christian ministers, a rabbi and an imam all offered prayers. Latino third-and-fourth graders from Fair Haven School sang, as did Varick AME Zion’s African-American choir.

From the start, the event also highlighted the theme the 44-year-old Elicker promoted in his mayoral campaign: generational and governmental change. He promised new faces, new approaches to old problems, a new emphasis on tighter controls over spending.

Along those lines, Elicker has scheduled an informal City Hall open house instead of a formal mayoral ball. And he has done away with paying cops to drive around the mayor.

For Wednesday’s inauguration, Elicker chose members of the next generation — two New Haven Academy students, Natalie Semmel and Sebastian Ward — to serve as the event’s emcees.

“Change can be hard,” but it’s necessary, Judge Robin Wilson  said before swearing in the new Board of Alders. 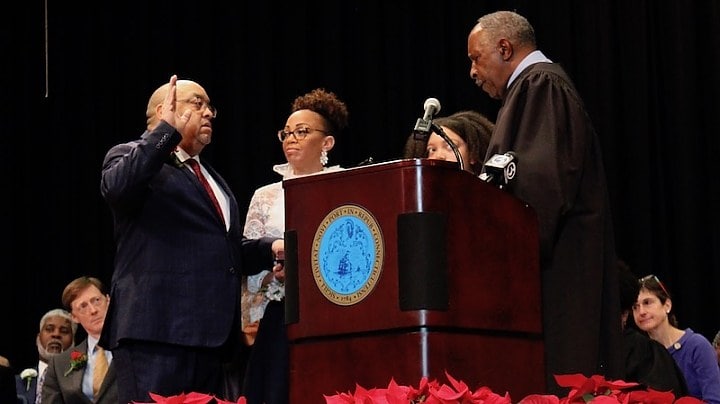 In a speech after his own oath of office, school board president Goldson  called for a change in how New Haven addresses public education.

From this day on he will not participate in debates over New Haven’s “failure” to balance a school budget, Goldson declared.

“We must transform the debate,” he said. The schools in New Haven suffer from budget underfunding, not a budget deficit, he argued. He cited three school systems regularly cited for “success”— in wealthy Darien, Weston and New Canaan. He argued that those wealthy communities spend more on education than New Haven can because of a state system that punishes cities that have tax-exempt property, which in New Haven accounts for 56 percent of all property. That means more students in each classroom, fewer AP classes, and inferior supplies and teaching tools. Goldson called for pressing the state to fund urban education better.

Similarly, he argued, New Haven student’s don’t face an “achievement gap.” They have an “opportunity gap.”

In his inaugural address, Elicker noted that New Haven has always undergone change in its history. New people always course in and out. It’s up to the city’s people to work together to ensure that change benefits everyone, he said.

“Newcomers have a place” in working toward that change, he said, noting that both he and his mayoral predecessor moved to New Haven after growing up elsewhere.

Right now New Haven is seeing change in terms of population growth, Elicker said: 3,000 new residents over the past few years; 1,000 new housing units built since 2014, with another 4,000 in the pipeline. “We must lean into this wave and create an environment that encourages growth … that benefits every single person in this community.”

To that end, he promised to work with others in the city to promote more truly affordable and safe housing, while holding “bad landlords” accountable; train and direct New Haveners for new medical, bioscience, digital health, tech, advanced manufacturing, and construction jobs; boost early-childhood education along with after-school and summer youth programs; and tackle violent crime along with “dangerous drivers.”

It invited the public to a “casual attire” open house at City Hall from 2-5 p.m. today — instead of hosting the customary black-tie mayoral ball. Orchid Cafe and Gateway Community College students will provide refreshments;  High School in the Community’s jazz ensemble will supply the tunes.

“I wanted to set the tone by not having some fancy event, but opening City Hall so people can meet each other and feel welcome,” Elicker said Wednesday.

Similarly, he plans to ride his bike to work Thursday for his first day in the office. He said he has decided not to continue having the city pay cops to drive the mayor. Instead, he plans to drive himself or accompany staff members driving to events. He said he plans to use one of the two electric vehicles in the city fleet.

“It’s an unnecessary expense,” he said of having cops drive the mayor. And “it sends the wrong message. It sends the message that I’m special. I don’t need security to go into neighborhoods of New Haven.”

This story was first published Jan. 1, 2020, by the New Haven Independent.