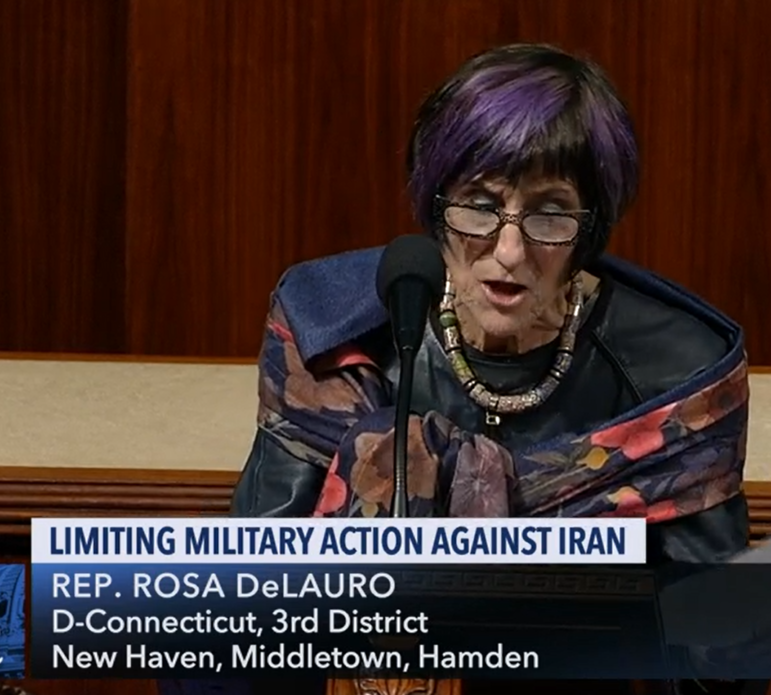 Washington – Connecticut’s members of the U.S. House, all Democrats, were unanimous in their support for a resolution approved Thursday that aims to limit President Donald Trump’s ability to wage war with Iran.

“Today’s vote on the War Powers Resolution is the first step that Congress has taken to reassert itself as the Constitution requires it to do,” said Rep. John Larson, D-1st District. “While President Trump does have limited authority to conduct military actions under the War Powers Act, he should have consulted Congress before authorizing the airstrike against Iranian Gen. Qassem Soleimani

“Hope that all House Republicans will vote against Crazy Nancy Pelosi’s War Powers Resolution,” Trump tweeted before the vote. But the Democratic-led U.S. House voted 224-194, largely along party lines,  to approve the resolution.

The resolution would mandate that Trump wind down military action against Iran within 30 days unless Congress votes to authorize it.

It says “Congress has not authorized the president to use military force against Iran.”

The administration says the president has the war-making powers under an Authorization for the Use of Military Force, or AUMF, that Congress approved in 2002 after the 9-11 attacks. It would prevent the president from waging war against Iraq unless Congress authorized or there were a danger of imminent attack.

Democrats were rankled by the White House’s failure to confer with Congress before the strike on Soleimani  and dissatisfied with the classified briefings by administration officials aimed at persuading lawmakers the Iranian official posed an “imminent threat.”

”What is concerning about this situation is not the death of someone who was obviously engaged in malign behavior across the region, but the cycle of escalation between the U.S. and Iran that risks sliding us into war without the president first consulting with the American people, or seeking lawful authorization from Congress…,” said Rep. Joe Courtney, D-2nd District.

The resolution was sponsored by Rep. Elissa Slotkin, D-Mich., a  freshman lawmaker and former analyst for the Central Intelligence Agency and the Department of Defense.

Because Trump was certain to veto any legislation that would curtail his war-making powers, the Democrats resorted to a legislative vehicle known as a “concurrent resolution,” that does not require the signature of the chief executive.

But there was a debate Thursday about whether the resolution, if approved by the Senate, would have the force of law. The Supreme Court has ruled that to have legal effect, an act of Congress must be signed by the president. But House Speaker Nancy Pelosi, D-Calif., insisted on Thursday the resolution would be binding.

A separate, similar resolution sponsored by Sen. Tim Kaine, D-Va., that would require the president’s signature is expected to come up for a vote in the Senate as soon as next week. Several Senate Republicans would have to join all Democrats for Kaine’s resolution to pass, then it would have to be approved by the House. But even if Kaine’s resolution gets through both chambers of Congress, Trump would probably veto it.

During the House debate on the resolution, Rep. Rosa DeLauro, D-3rd District, observed  “our constituents held their breath on Tuesday” when Iran launched a dozen ballistic missles at U.S. and Iraqi-shared military bases in Iraq.

“Thankfully, no lives were lost in Iran’s retaliatory attacks,” she said. “But concern remains about the rationale and ramifications.

DeLauro said the resolution was necessary because Trump, before his killing of Soleimani, “failed to consult the Congress, failed to secure specific authorization and failed to cite with specificity the imminent threat in a classified briefing for members of Congress.”

“It’s unprecedented the level this administration is trying to obscure the facts from Congress and the American people,” DeLauro said.

In arguing against the resolution, Republicans said Democrats were trying to tie the hands of a president they disliked in a political gambit and were undercutting the Pentagon’s ability to keep Americans safe. “Instead of applauding the men and women of our military standing in harm’s way…my colleagues seek to undermine them,” said Rep. Dan Crenshaw, R-Texas.

But not all Republicans opposed the resolution. Rep. Matt Gaetz, R-Fla., was among the three GOP members who voted for it. Gaetz, one of Trump’s most vociferous supporters, said he  supported Trump’s decision to kill Soleimani, but also believed Congress has a say in “matters of war and peace.”