No seats flipped Tuesday night in special elections for the state House of Representatives as Democrat Brian T. Smith of Colchester defeated Republican Mark DeCaprio in the 48th District and Republican Brian Farnen of Fairfield beat Democrat Jennifer Leeper in the 132nd District.

Opponents of the truck tolls proposal being considered in the General Assembly tried to make the 48th District election a test of tolls as a wedge issue in the 2020 fight for control of the legislature in November, campaigning for DeCaprio.

Democrats are counting on benefitting from a strong turnout this fall in opposition to President Donald J. Trump, just as they capitalized on anti-Trump activism in 2018. The GOP is looking to rally the party around opposition to tolls.

“State representative races come down to the quality of the candidates and their connections to the community,” said House Majority Leader Matt Ritter, D-Hartford. “This notion that these elections are won on these single issues are desperate and reeks of a political party that knows their candidate for president is very unpopular in Connecticut.”

House Minority Leader Themis Klarides, R-Derby, agreed that the strength of the candidates and their organizations trump single issues, but she still sees tolls as a pivotal issue in the 2020 elections, calling it the most potent grass-roots issue since she entered politics. 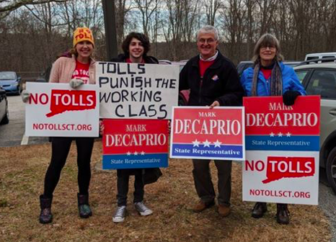 Mark DeCaprio featured the No Tolls movement on his campaign Facebook page.

“Rep. Ritter wants to believe that this tolls thing is not as big a deal as it it,” Klarides said. “He does that at his own peril.”

Both districts on the ballot Tuesday were seen as potentially competitive in mid-winter special elections, when victory relies on the ability to mobilize and turn out the base. In 2016, Trump won portions of Orange’s district, while Hillary Clinton easily carried Fairfield with 57% of the vote.

The 48th District covers Colchester, Lebanon, a portion of Mansfield and a thin slice of Windham, a politically and geographically mixed district or urban, suburban and rural areas that are home employees of the University of Connecticut, as well as farmers and sportsmen. Orange managed to span the various constituencies, winning the cross endorsement of the liberal  Working Families Party and serving as chair of the sportsman’s caucus.

“Congratulations to Representative-elect Brian Smith on an incredible victory tonight,” Gov. Ned Lamont said in a statement that ignored the tolls issue. “Brian will be a strong voice for the 48th District and carry on the legacy and dedication of Linda Orange. Through hard work, his message of advocating on behalf of families and small businesses won the election.”

Smith, who was cross-endorsed by the Working Families Party, is a retiree and long-time Colchester resident who has served as a selectman and finance board member. He issued a statement of thanks Tuesday night, while DeCaprio declined to concede as his campaign raised concerns about hand-counted ballots in two polling places.

The 132nd District is wholly within Fairfield, a well-to-do Bridgeport suburb on the Long Island Sound shore. Kupchick, a moderate who unseated a Democratic first selectman last year, campaigned for Farnen. He is the general counsel and chief legal officers of the Connecticut Green Bank, the nation’s first green bank.

Another special election is scheduled for next week in the 151th House District to pick a successor to former Rep. Fred Camillo, a Republican who resigned to become the first selectman of Greenwich.

Democrats gained legislative seats for the first time in a decade in 2018, winning a 92-59 majority. The Democratic edge fell to 91-60 when former Rep. James Albis, D-East Haven, resigned to the join the administration of Gov. Ned Lamont, and Republicans won the seat in a special election. With the three recent vacancies, the advantage was 90-58.