A new report by Connecticut Voices for Children includes a series of recommendations for an inclusive workforce, equity measurements and pay reform.

Black and Latino residents are more likely than white residents to be uninsured, to die before reaching adulthood and to report being in poor health. And while Connecticut’s health statistics compare favorably to other states, aggregate data “mask enormous disparities in health and health care experienced by residents of color,” Connecticut Voices for Children found in a new review of health equity.

“Put simply, compared to their white peers, people of color in Connecticut are more likely to live in poor health and – for black residents – to die younger,” Arielle Levin Becker, communications director for the health foundation, wrote in the study.

Connecticut Voices pointed to Census figures and state reports showing a prevalence of racial and ethnic inequalities in health outcomes, cost for services and insurance coverage.

The Connecticut Health Foundation noted that disparities were caused by differences in insurance coverage and in access to a regular health care provider.

Additionally, Hispanic adults were more than twice as likely as white residents to say they went without seeing a doctor in the past 12 months because of the cost. 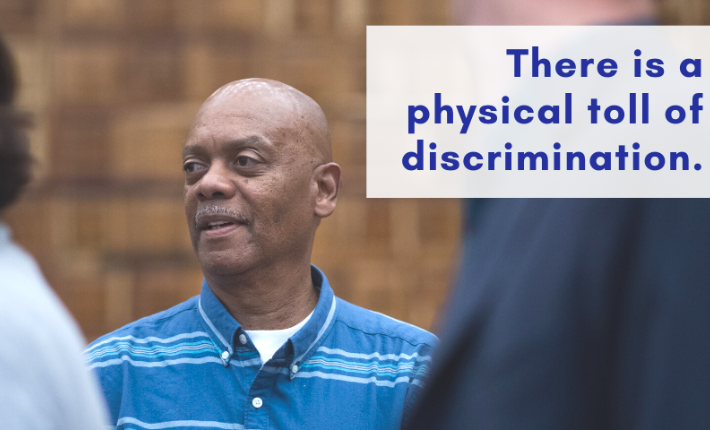 A report by the Connecticut Health Foundation noted that discrimination causes a physical toll on health. Studies have found links between experiencing discrimination and negative physical and mental health consequences.

Social factors, such as access to transportation or housing, a lack of food, and personal safety, also played a role in the disparities, along with disparate treatment and the physical toll of discrimination.

“Studies have found links between experiencing discrimination and negative physical and mental health consequences including depression, anxiety, hypertension, breast cancer, and giving birth preterm or having a low-birthweight baby,” Levin Becker wrote. “Research suggests that one way discrimination could lead to poorer health is through repeated activation of the body’s stress response system, which can have negative long-term physiological and psychological effects.”

Both organizations highlighted areas of improvement for tackling health disparities.

“Put simply, compared to their white peers, people of color in Connecticut are more likely to live in poor health and – for black residents – to die younger.”

To help people get insurance coverage, the foundation recommended focusing enrollment efforts on communities with high rates of uninsured residents, concentrating on affordable options for people earning just above the Medicaid threshold – the group most likely to be uninsured, and supporting outreach efforts to ensure people who qualify for Medicaid are enrolled.

To back community health workers, the group suggested launching a voluntary certification program, hiring those workers to reach specific patient populations and exploring ways to pay for their services.

In the area of pay reform, the organization suggested seeking input from communities of color; including equity measures in cost and quality incentives; and removing barriers to integrating physical, behavioral and oral health care.

When exploring ways to measure equity, the group recommended requiring all health agencies to arrange data by race, ethnicity, language, gender and sexual orientation; mandating that agencies streamline eligibility determinations through information sharing; and requiring them to incorporate decreases in health disparities into payment models. 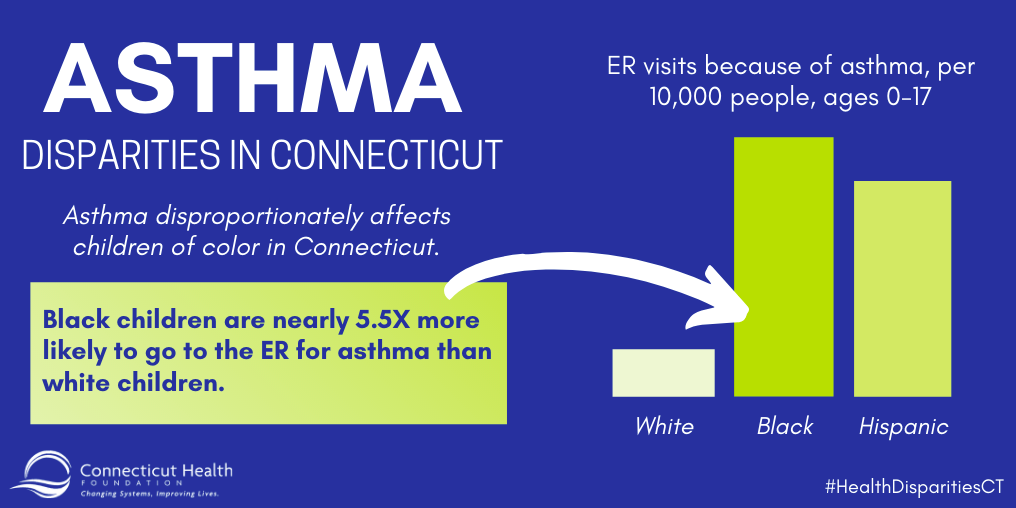 A graphic by The Connecticut Health Foundation shows disparities in Connecticut’s asthma rates.

Connecticut Voices urged hospitals to invest in programs that target the root causes of health disparities, and suggested creating an information technology hub for community organizations to improve their coordination with health providers.

Siegel also said agencies could do a better job including people of color on consumer advisory boards and in working groups. “A representative from one community of color cannot represent all communities of color,” she wrote.

In the area of workforce development, she suggested expanding educational programs that help guide minorities into the health care profession, and increasing financial incentives – such as loan forgiveness – for providers from underrepresented groups.

“Connecticut has the infrastructure and resources to reform our health systems so that they address the root causes of racial disparities in health outcomes,” Siegel wrote.