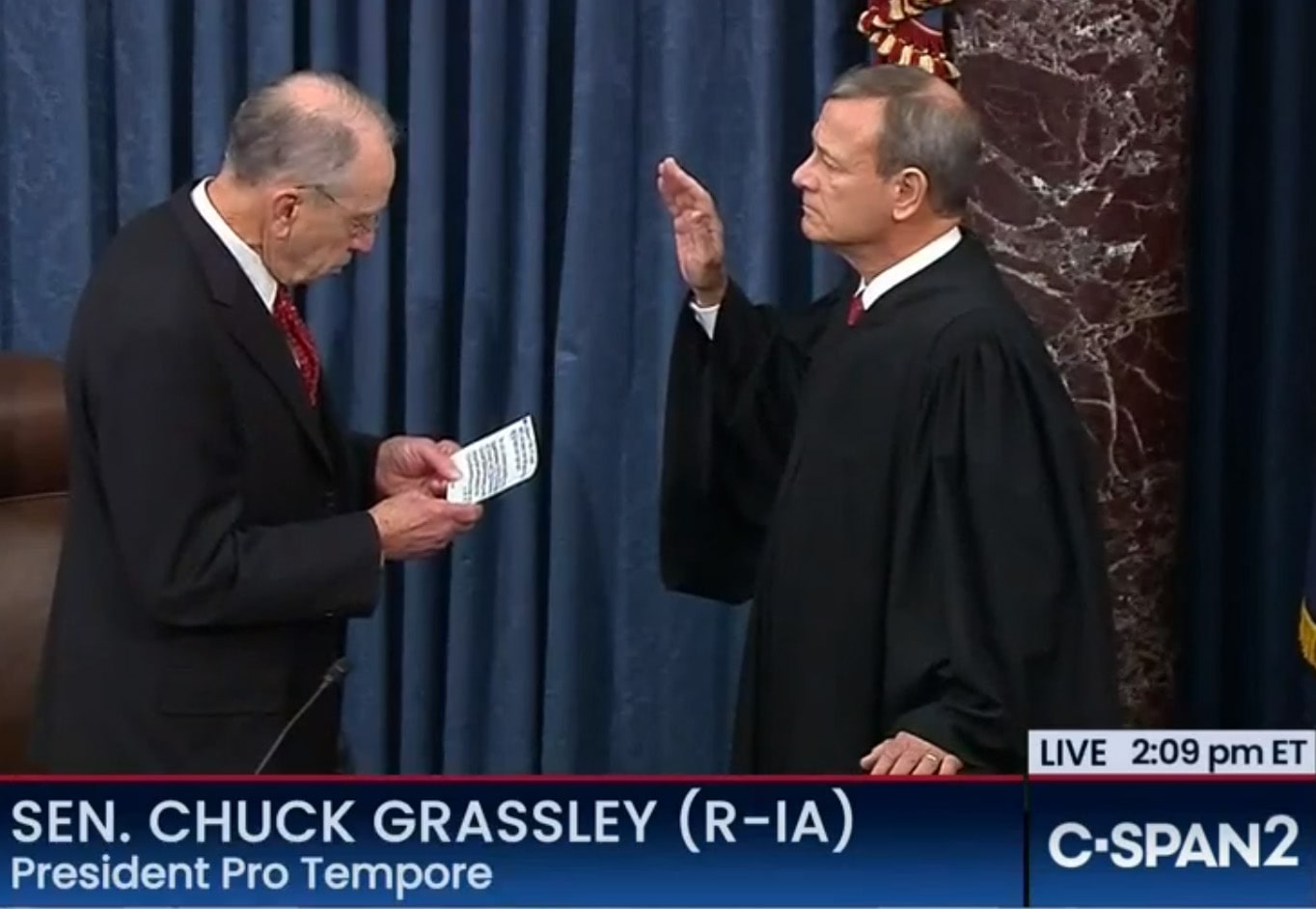 Supreme Court Chief Justice John G. Roberts Jr. is sworn in Thursday at the start of the Senate impeachment trial.

Washington – On the day they were sworn in as jurors for President Donald Trump’s impeachment trial, Connecticut’s senators joined their Democratic colleagues to press a contentious issue that will roil proceedings when the trial officially begins next week.

Namely, the calling of witnesses and inclusion of new documents and information at the trial.

An hour after Sens. Richard Blumenthal and Chris Murphy and their fellow senators were sworn in as jurors, Senate Minority Leader Chuck Schumer, D-N.Y., said he will likely force votes on witnesses on Tuesday.

For Schumer to win on this issue, four Republicans would have to defect and give minority Democrats a 51-vote majority, which could be politically difficult.

The witnesses Schumer and fellow Democrats would like to hear from are White House Chief of Staff Mick Mulvaney; former National Security Adviser John Bolton; senior adviser to Mulvaney, Robert Blair; and Office of Management and Budget official Michael Duffey.

“Each of these witnesses had eyes and ears on the president of the United States. They had first-hand knowledge and must appear,” said Blumenthal, who joined Schumer and other Democrats in a press conference at the U.S. Capitol Thursday afternoon to make their case.

For weeks there’s been a partisan standoff over how Trump’s trial will be conducted.

While Democrats want to call witnesses and seek documents from the Trump administration that were blocked from House  lawmakers who conducted the impeachment inquiry, Republicans say all investigations should have been completed in the House.

Senate Majority Leader Mitch McConnell has rebuffed the calls for new witnesses at the outset of the trial. He has also indicated the question of whether to hear witnesses will be decided after House managers and the president’s defense team present their cases.

But Democratic cries for more witnesses have been emboldened by an MSNBC interview late Wednesday given by Lev Parnas, an associate of Trump’s personal lawyer, Rudy Giuliani, who said the president knew of the campaign to pressure Ukrainian leaders to investigate former Vice President Joe Biden and his son, Hunter.

Democrats were also bolstered by a Government Accountability Office report released Thursday that said Trump broke the law by withholding defense aid to Ukraine, allegedly to step up the pressure on Kiev to investigate the Bidens. 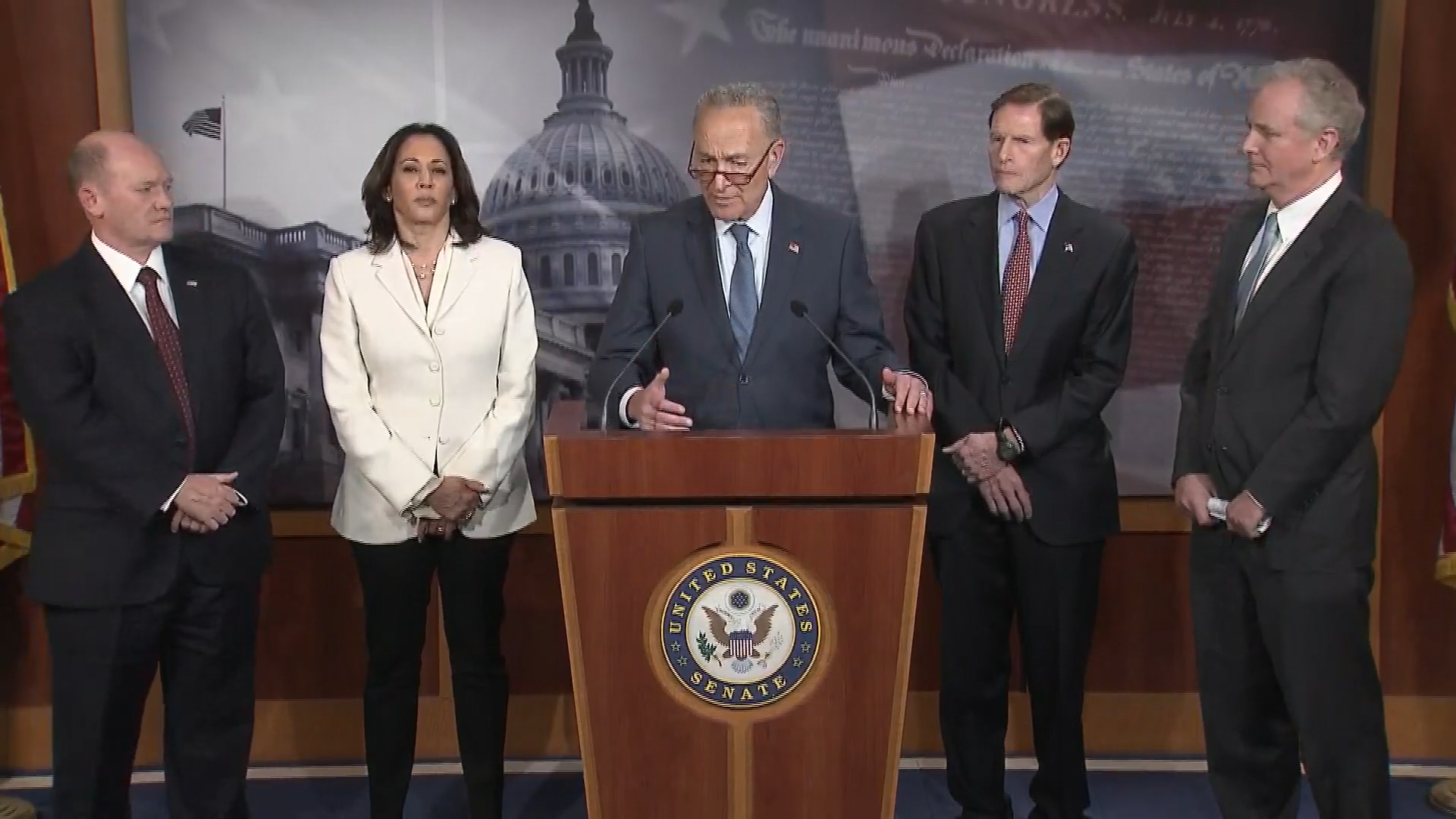 “Faithful execution of the law does not permit the President to substitute his own policy priorities for those that Congress has enacted into law,” the GAO said.

“The fact that the president decided to move forward, despite warnings from advisors, shows the scope of his abuse of power,” said Murphy. “This finding, combined with the revelations from Lev Parnas this week and every other piece of evidence uncovered by House investigators, highlight the critical need for the Senate to conduct a fair and comprehensive trial that hears from witnesses and gathers additional documents.”

Both Murphy and Blumenthal have appealed to Senate  Republicans  to support their call for witnesses.

“I hope my Republican colleagues can put country over party,” Blumenthal said.

Thursday was a day of solemnity and tradition.

After the swearing in of senators and the presentation of the two charges of abuse of power and obstruction of Congress, Supreme Court Chief Justice John G. Roberts Jr., was sworn in to preside over the trial.

But McConnell said the trial will begin “in earnest” next week. That’s when the Senate will vote on the rules that will govern the impeachment trial, the third in U.S. history, and begin to hear the House impeachment managers and Trump’s defense team make their cases.

Senators have received a list of strict rules they must follow.They won’t be able to bring their cell phones or any other electronic devices to the floor, speak to others, and must remain largely at their desks during proceedings.

And the Senate will be in session Monday through Saturday, a stark difference from the chamber’s normal Monday evening to Thursday afternoon schedule. That will limit the time Blumenthal and Murphy will be in Connecticut during the trial.

The duration of the trial is unknown, but Republicans have made it clear they want it over quickly. But some of them have threatened to call witnesses if Democrats do, especially Hunter Biden.

The White House also wants to put a quick end to what it says is a “sham” impeachment, a charge echoed by Trump’s allies in Congress.

“They just hate this guy so much,” said Sen. Lindsey Graham, R-S.C., of congressional Democrats. “It’s been an unending effort to destroy his presidency.”