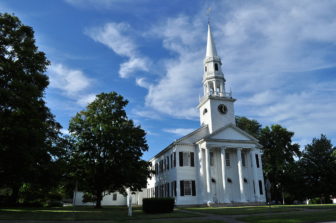 Litchfield Congregational church is one of the state’s many nonprofits that were impacted by the tax.

Washington – While Democrats have not repealed much of the GOP’s tax overhaul, there have been some tweaks, including the elimination of a tax levied on churches, universities and other nonprofits.

Reps. Joe Courtney, D-2nd District, and John Larson, D-1st District, who is a member of the tax-writing Ways and Means Committee, backed efforts to repeal a 21% levy in the massive 2017 Tax Cuts and Jobs Act imposed on parking and transportation benefits provided to employees of churches and other nonprofits.

The Connecticut Democrats argued the new tax placed an enormous burden on many religious and nonprofit organizations in Connecticut, which were forced to divert resources away from their missions to pay the government.

Courtney said nonprofits were “flipping out” over the tax.

House legislation backed by Courtney and Larson to repeal the tax was included in a massive budget bill approved by Congress last month.

This week, the Internal Revenue Service issued guidance to nonprofits about how they can get a refund of taxes on parking and transportation benefits paid in 2018 and 2019.

To get a refund or credit for those payments, the IRS instructed these groups to file amended returns on form 990-T and write “Amended Return – Section 512(a)(7) Repeal.”

Although nonprofits can reclaim money paid going back to 2018, when the tax took effect, the IRS said there are deadlines to request a refund.

Courtney and Larson have sent letters about the repeal of the tax to Connecticut nonprofits, including the Norwich Area Clergy Association, the NAACP, the Jewish Federation Association of Connecticut, the Connecticut Nonprofit Alliance, the Connecticut Conference of the United Church of Christ, the Archdiocese of Hartford and others.

“As a result of this repeal, nonprofits and faith groups that were being taxed on employee benefits can now use their precious resources towards the mission of their organization,” the lawmakers’ letter said. “Tax-exempt organizations, such as churches, synagogues, and charitable organizations, provide enormous benefits to our communities and should never have been taxed on these benefits in the first place.”

The federal tax bill impacted nonprofits in other ways, too.

One was the doubling of the standard deduction and the limitation on deductions for state and local income taxes, which resulted in a drop in filers who itemized their returns and used charitable deductions to shrink their tax liability.