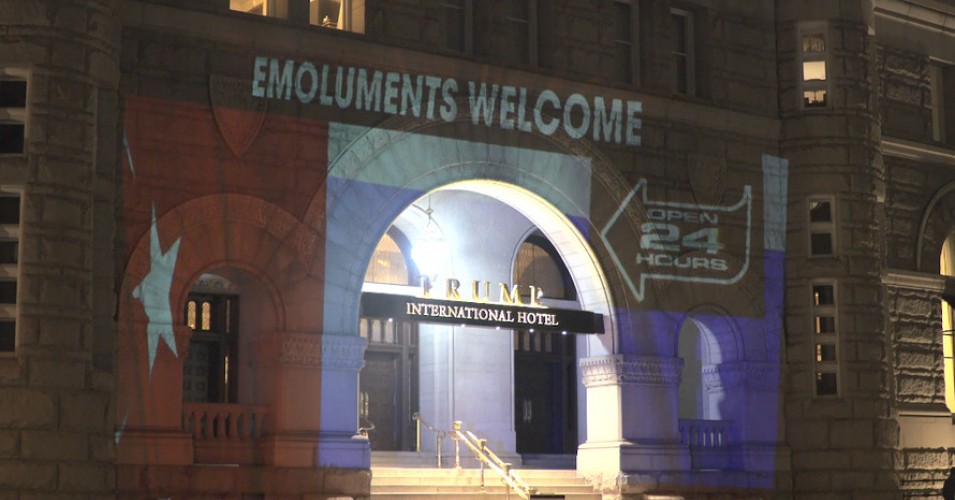 Activists projected the words “Emoluments Welcome on the facade of the Trump International Hotel in Washington in May 2017.

Washington – A federal appeals court on Friday threw out U.S. Sen. Richard Blumenthal’s legal challenge of President Donald Trump, a lawsuit that alleged the president is improperly profiting from his position.

The Connecticut senator is the lead plaintiff in Blumenthal v. Trump, a case brought by more than 200 Democratic lawmakers who sued Trump, arguing that Congress has the right to approve — or withhold — consent before the president accepts payments or benefits from foreign governments.

But a three-judge panel on the U.S. Circuit Court for the District of Columbia said Democrats who brought the lawsuit, based on the emoluments clause of the U.S. Constitution, had no standing to sue because they did not represent a majority in the U.S. House of Representatives or the U.S. Senate.

“Here, regardless of rigor, our conclusion is straightforward because the members—29 Senators and 186 members of the House of Representatives—do not constitute a majority of either body and are, therefore, powerless to approve or deny the President’s acceptance of foreign emoluments,” the opinion reads.

Blumenthal said “I am deeply disappointed and alarmed by this decision.”

“This dismaying decision adds to the already widespread fear that the checks on unbridled presidential power, corruption, and self-enrichment have been seriously undermined,” Blumenthal said.

The senator also left open the possibility of an appeal to the Supreme Court.

“As we evaluate next steps, we remain fully committed to doing everything in our power to hold President Trump accountable for his unacceptable, unconstitutional misconduct,” Blumenthal said.

The judges only ruled on the issue of whether the members had standing. They did not rule on a district court’s earlier finding that the Democrats had a cause of action and a claim against the president.

“The Members can, and likely will, continue to use their weighty voices to make their case to the American people, their colleagues in the Congress and the President himself, all of whom are free to engage that argument as they see fit,” the judges wrote. “But we will not—indeed we cannot—participate in this debate.”

“While we are disappointed in the panel’s decision and are in active discussions with our clients as they consider their next steps, it is important to recognize that today’s ruling is not a decision on the merits,” said Constitutional Accountability Center President Elizabeth Wydra. “The Court of Appeals did not in any way approve of President Trump’s repeated and flagrant violations of the Constitution’s Foreign Emoluments Clause.”

Trump reacted through Twitter, a favorite form of expression.

“Another win just in,” the president tweeted. “Nervous Nancy Pelosi and the Democrats in Congress sued me, thrown out. This one unanimous, in the D.C. Circuit. Witch Hunt!”

Later on Friday, speaking to reporters on the South Lawn of the White House , Trump held up a copy of the decision and called it a “total win” on “another phony case.”

The founding fathers wrote an emoluments clause in the Constitution because, although they did not envision Trump, they did worry about the activities of a businessman-president.

Blumenthal and the other Democrats who sued Trump maintained that the president’s decision to keep his stakes in his global businesses raised the question of whether he is violating that clause, which says “no Person holding any Office of Profit or Trust under them, shall, without the Consent of the Congress, accept of any present, Emolument, Office, or Title, of any kind whatever, from any King, Prince, or foreign State.”

Friday’s ruling may mark the end of a lawsuit that was filed in 2017. Last year, U.S. District Judge Emmet Sullivan ruled that the Democrats could go to court and allowed discovery to begin.

But the Justice Department appealed that ruling to the U.S. Circuit Court.