Dems: truck tolls vote next week. But there’s this one thing…

Neither chamber wants to go first, so they might attempt a synchronized vote. 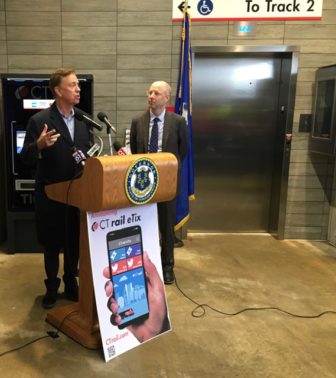 House Speaker Joe Aresimowicz of Berlin and Senate President Pro Tem Martin M. Looney of New Haven said Tuesday that each has convinced the other they have the votes necessary to pass legislation next week authorizing tractor trailer tolls on a dozen highway bridges. But there’s a significant complication.

The Democratic leaders still have to convince their rank-and-file that the other chamber’s count can be trusted. And that is leading to the possibility of the House and Senate acting simultaneously — an unprecedented scheme immediately denounced by Republican minority leaders as a mockery of parliamentary process, legislative history and common sense.

“It is the intent to bring it up at the same time,” Aresimowicz said.

Looney acknowledged hours later in a separate interview that synchronized debating and voting indeed was under consideration, though it was not his preference.

Nor would it be easy to achieve.

As a matter of legislative procedure (as well as physics), the same bill cannot be before two chambers at the same time. The workaround would be each chamber debating and voting on identical bills. To become law, one would have to be passed eventually by both chambers.

“Only one chamber would have to vote twice,” Looney said.

And that, say Republicans, would be a sophomoric solution to satisfy unnamed House and Senate Democrats, each willing to vote for tolls only if final passage is guaranteed and each saying to each other: “You go first.”

“Think about the silliness of this — foot dragging until one chamber catches up to the other? If that doesn’t speak volumes in this building, then nothing else does. It’s absurd.”

“Think about the silliness of this — foot dragging until one chamber catches up to the other?” said Senate Minority Leader Len Fasano of North Haven. “If that doesn’t speak volumes in this building, then nothing else does. That’s just silly. It’s lunacy. It’s absurd. It’s laughable.”

“You wonder why the public doesn’t trust government, they don’t even trust themselves,” said House Minority Leader Themis Klarides of Derby.

How both chambers could simultaneously vote was unclear.

Each chamber has the custom of unlimited debate, and Republicans have more than a little to say about how long a debate might run. Theoretically, Looney said, the chamber that finished its debate first could leave the voting machine open until the other was ready.

“The institution matters more than any governor, than any legislator or any bill and when you bastardize the institution, you can’t repair it. And that comes first,” Fasano said.

“That is disgusting, quite honestly,” Klarides said.

The Connecticut General Assembly has managed in the past to take controversial votes without a guarantee of what the other chamber might do, such as passing an income tax and repealing the death penalty. So, what is so difficult about a bill that would authorize a dozen tolls on tractor trailers?

“I don’t know if it’s the issue itself, but rather this mischaracterization of what the bill actually does,” Aresimowicz said. “That frustrates Marty and I.”

In February, Gov. Ned Lamont proposed a comprehensive system of tolls on cars and trucks at more than 50 locations on Interstates 84, 91 and 94, as well as the Merritt and Wilbur Cross parkways. It would have raised as much as $800 million annually.

When lawmakers refused to bring the measure to a vote, the administration countered with a downsized version of tolls on cars and trucks on 13 bridges. Legislative leaders could not find the votes for passage, leading to the current version of tolling only tractor trailers, raising about $175 million a year.

Opponents say that the measure would be a first step to a broader system involving car tolls but can’t quite explain how something so politically unpopular might win passage. The bill before the legislature would not allow car tolls without the passage of another law explicitly permitting them.

Aresimowicz said a synchronized vote “doesn’t allow the folks that are organizing against the issue to play one chamber off against the other.”

Looney said Aresimowicz called him Monday night to say he had confirmed the availability next week of at least 76 House Democrats in favor of the transportation bill, the minimum necessary for passage. Democrats hold a 91-60 majority in the House.

The vote would take place on the 18th, 19th or 20th, though a public hearing has been scheduled for the 19th on a controversial bill to repeal the religious exemption for school-age vaccination.

Lamont said earlier Tuesday, before Aresimowicz and Looney spoke about the potential need for a synchronized vote, that he was pleased a vote may be imminent.  The governor spoke at a press conference announcing the availability of CTrail exit, a mobile app allowing the online purchase of train tickets on the Hartford Line and Shoreline East.

”The Senate’s been clear. They’ve got their list. They’ve shared their lists. They know who the votes are. The houses are ready to go. They’re both ready to vote,” Lamont said. “I think right now, they are doing the Kabuki dance — what’s the exact day and the order that people go. I think it’s going to happen next week.”