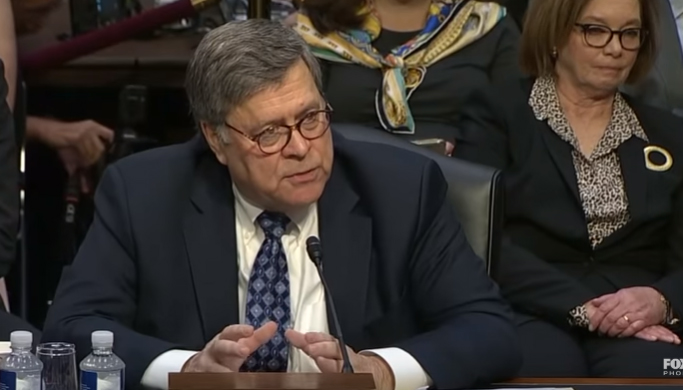 Washington – Connecticut Sen. Richard Blumenthal on Friday called on U.S. Attorney General William Barr to resign, saying he or other officials working for him unethically interfered in the case of Roger Stone, an ally and longtime adviser to President Donald Trump.

“The interference in this case by you or other senior DOJ officials working under you is a clear violation of your duty to defend fair, impartial, and equal justice for all Americans. As a result, we call on you to resign immediately,” said a letter to Barr signed by Blumenthal and eight other Senate Democrats, including Elizabeth Warren of Massachusetts.

Warren, who is seeking the Democratic presidential nomination, has called for the House of Representatives to start impeachment proceedings against Barr if he does not resign.

Barr ignited a firestorm this week after top Justice Department officials intervened in the sentencing of  Stone, who  has been convicted of lying to Congress, witness tampering and obstruction of justice.

In a highly irregular reversal, the Justice Department overruled a recommendation by its team of lawyers who prosecuted Stone that he spend seven to nine years in jail. The Justice Department told the presiding judge that such a punishment – which was in line with sentencing guidelines – “would not be appropriate.”

That prompted all four career prosecutors handling the case against Stone to withdraw from the legal proceedings this week — and one to quit his job entirely.

Among those prosecutors who quit the case is New Haven native Aaron Zelinksy, who had also worked on former special counsel  Robert Mueller’s investigation into Russian meddling in U.S. elections. Zelinsky, a Yale Law graduate, is the son of a former New Haven alderman.

Hours after Barr said his team had to amend its sentencing recommendation,  Trump  sent a middle-of-the-night, angry tweet that suggested Stone deserved leniency.

“This is a horrible and very unfair situation,” Trump tweeted early Tuesday. “The real crimes were on the other side, as nothing happens to them. Cannot allow this miscarriage of justice!”

After the prosecutors resigned from the case, Trump issued another tweet.

“Congratulations to Attorney General Bill Barr for taking charge of a case that was totally out of control and perhaps should not have even been brought,” the president tweeted.

On Thursday Barr rebuked the president for his tweets.

Barr also said it was “preposterous” to suggest that he “intervened” in the case. He said he was acting instead to try to resolve a dispute about the sentencing recommendation within the department.

But Blumenthal, Warren , both members of the Senate Judiciary Committee, and the others who wrote Barr demanding his resignation aren’t buying that argument. The say Trump’s tweets indicated the attorney general was “directly involved” in the effort to shorten Stone’s jail time, as did Barr’s interview with ABC News.

“It appears to show that you and other top DOJ officials intervened in a clearly political fashion to undermine the administration of justice at the president’s behest in order to protect a well-connected political ally who committed a ‘direct and brazen attack on the rule of law,’” the senators wrote.

Their letter also said “a DOJ that abandons the rule of law in order to give sweetheart deals to criminals acting on behalf of the President of the United States is as corrupt as it is unacceptable.”

“You and the other officials involved must be held accountable for these actions. We therefore urge you to resign from your position, effective immediately,” the senators concluded.

The  Justice Department did not immediately respond to a request for comment.