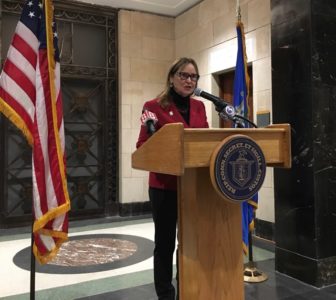 Secretary of the State Denise Merrill announces the candidates qualified for the presidential primary in Connecticut.

Connecticut’s secretary of the state said Friday that Republicans will have a choice of at least three candidates in a presidential primary on April 28, but the party’s state chairman asserted that the GOP doesn’t want one and might go to court to stop it.

President Donald J. Trump, who won 85.6% of the vote in the New Hampshire primary this week, will be contested in Connecticut by William Weld, the former governor of Massachusetts, and a former Democratic presidential candidate, Rocky De La Fuente.

Actual ballot order will be determined by lot on March 24.

State law required Secretary of the State Denise Merrill to announce the list of candidates precisely at 10 a.m. on Friday, the 74th day preceding the April 28th primary.

The secretary of the state decides who makes the ballot based on a low bar set in state law: A candidate must be “generally and seriously advocated or recognized according to reports in the national or state news media.”

Guided by that law, Merrill said, she opts for access.

“We don’t make any determination requiring any measure of viability, or whether or not someone is going to win,” Merrill said. “That is not the measure we use.”

J.R. Romano, the state Republican chairman, said Merrill is imposing a primary on a Republican Party that doesn’t want one, and she did so without consulting him, a snub he called petty.

“I don’t think she did her due diligence,” Romano said. “We are actually looking at challenging it.”

Any court action would be part of a larger legal challenge to election laws that the GOP already was considering. Romano said he believes that Connecticut overreaches with laws that dictate how candidates for state and local office are nominated,  infringing on prerogatives that belong to political parties. He was uncertain if a lawsuit could be ready in to time challenge to challenge the April primary.

Nothing in state law suggests the secretary of the state should consult with party leaders, make a judgement about the viability of candidates, or the consider the cost to the towns of printing ballots for a primary challenge of a sitting president. 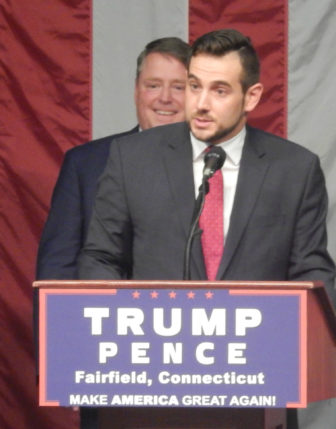 “What J.R. calls pettiness, we call democracy,” said Gabe Rosenberg, a spokesman for Merrill. “Our office followed both the letter and spirit of the law, and let the voters decide.”

Anyone paying moderate attention to the campaign will recognize the eight Democrats placed on the ballot by Merrill. Another path to the ballot is gathering signatures from one percent of the party’s enrollment.

No one is suggesting the Trump’s renomination is in jeopardy. But should Republican challengers be allowed to try? And should Republican voters not enamored with the president be afforded the opportunity to signify that in a primary?

“J.R. makes no sense. Making decisions about how to run Connecticut’s elections is exactly Secretary of the State Denise Merrill’s job. We are proud of our cities and their Democratic leaders,” Wyman said. ” As one party chair to another, J.R. should take care of whatever issues Republicans are having, and not expect others to solve his problems.”

They may have a chance to chat on March 24. It is Merrill’s intention to invite the state party chairs to her office to draw the lots for ballot order, as she did four years ago. But Romano said he would decline.

Weld, the former governor of Massachusetts, is offering himself as the leading alternative for GOP voters who cannot abide a second Trump term. De La Fuente is making his second run, but his first as a Republican.

Ballot access in New Hampshire is purchased by paying a $1,000 filing fee. (Mark Stewart Greenstein of West Hartford, who also ran for governor in 2018, was the first to sign up for the New Hampshire primary in 2016 primary and again in 2020.) He won fewer than 50 votes each time.

Four years ago, De La Fuente petitioned his way onto the Democratic ballot in Connecticut. He lives in California, but De La Fuente also has run in primaries for the U.S Senate in nine states. He went 0-for-9, hitting a high-water mark of 12.3% in a two-way R.I. primary.

By Merrill’s reckoning, De La Fuente has attracted sufficient press coverage to qualify in Connecticut this year. Besides, he has a habit of suing for access. (He won a suit against Connecticut years ago over its requirement that only state residents circulate his petitions.)

“He is a very persistent candidate,” Merrill said.

Connecticut is one of six states participating in what is variously dubbed the I-95 or Acela primary on the eastern seaboard. The others are Delaware, Maryland, New York, Pennsylvania and Rhode Island.

Trump won a four-way Connecticut primary in 2016 with 123,523 votes. John Kasich, then the governor of Ohio, was second with 60,522. Sen. Ted Cruz of Texas and Ben Carson also were on the ballot.