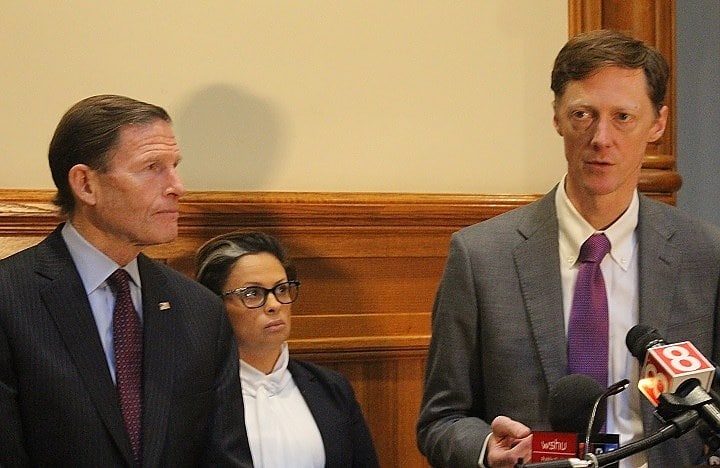 Blumenthal offered that scathing criticism Friday afternoon during a press conference on the second floor of New Haven City Hall.

Even though this budget is simply a proposal and not a final adopted version of what will go into place when the next federal fiscal year begins on Oct. 1, Blumenthal, Elicker, and the local public health officials present said the cuts included are so severe that they warrant loudly protesting now, no matter how early in the budget-making process.

Amidst a budget that includes cuts to a variety of social services, including affordable housing, food stamps, and student loan forgiveness, Blumenthal and Elicker focused their criticisms Friday afternoon on Trump’s proposed cuts to federal public health agencies.

These proposed cuts would be “tantamount to public health suicide,” Blumenthal said. Particularly at a time when the coronavirus has infected 64,000 people and counting in China and 24 other countries around the world.

“A pandemic that engulfs the world in coronavirus is preventable,” Blumenthal said, “but only if we invest in vaccines, in the prevention steps, in other measures that make common sense. China may seem like a long way away. But infections and diseases spread rapidly in today’s world.”

Elicker said that there have been no known coronavirus infections in New Haven. But that doesn’t mean the city shouldn’t do it all it can to protect against any potential outbreaks, and to make sure that residents are inoculated and protected against a much more common infection: the seasonal flu.

Bond said that 59 percent of the city Health Department’s budget is made up of so-called Special Funds, consisting of outside grants from the state and federal governments.

Trump’s proposed cuts would “impact us significantly,” she said.

“This is Valentine’s Day,” Elicker said. “I think we have seen from our leadership [in the White House] a lack of compassion, a lack of caring, a lack of love for so many people in our nation that make our nation strong.”

“This is the wrong direction for us to go in, especially now.”

This story first appeared Feb. 14, 2020, in the New Haven Independent.