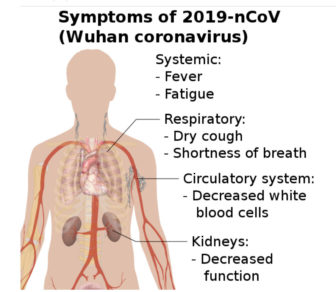 As the scientific community scrambles to find a drug that can effectively treat tens of thousands of patients sickened by a new respiratory virus, they are trying some surprising remedies: medicines targeting known killers like HIV, Ebola and malaria.

American drugmakers have shipped two antiviral medications to China as doctors and public health officials there seek an effective treatment for patients sickened by the novel coronavirus, which has recently been named COVID19. The virus has afflicted tens of thousands of people worldwide and killed more than 1,300. Most of the cases and deaths occurred in Hubei province, China, where the outbreak began.

Among potential remedies is an HIV medication that may work to block an enzyme needed by the virus to mature. An unapproved medicine used to fight the Ebola virus is being tested in Chinese patients to see whether it can disrupt the new virus’s genetic material.

A third drug, widely used around the globe to fight the parasite that causes malaria, is also being tried in China to see if it can slow infection by preventing the virus from infiltrating cells.

The evidence behind some of these medicines is flimsy, researchers acknowledged. But even with strong data, they said, human trials are the only way to know whether these drugs are effective.

“Just because it works well in a test tube and in animals doesn’t mean that it will work in people,” said Dr. Stanley Perlman, a professor of microbiology and immunology at the University of Iowa.

The effort is not unprecedented. When a novel virus surfaces and endangers large populations, scientists sometimes turn to existing drugs that can be repurposed. Medications available in the United States have already gone through rigorous testing to prove they are safe, eliminating the need to run costly human trials to assess safety in an emergency.

That said, officials generally look at the evidence surrounding the drugs and the virus to try to find a viable option.

“They usually cast a pretty wide net because they don’t know for any given virus what’s gonna work,” said Dr. Rajesh Gandhi, a professor of medicine at Harvard University and chair-elect of the HIV Medicine Association.

In 2003, a related coronavirus with no known treatment caused a global outbreak of severe acute respiratory syndrome (SARS). The response involved testing a litany of drugs, including a combination of ritonavir and lopinavir, antiretroviral medications used to fight HIV.

Early studies hinted that the medicines were effective in fighting the virus in patients. The combination of drugs, known by the brand name Kaletra, appears to work to stop enzymes called proteases from allowing the virus to mature and replicate. But the outbreak — and the ability to robustly test treatments — all but disappeared in a little over a year.

Nine years later, another coronavirus caused Middle East respiratory syndrome (MERS). That outbreak gave scientists another chance to test the HIV medication against this family of viruses, and a clinical trial is underway in Saudi Arabia.

Chinese doctors are using Kaletra now against the novel coronavirus.

Despite these opportunities to test the HIV drug against pathogens related to the one causing the current outbreak, “everyone agrees we don’t have a standard therapy for the novel coronavirus,” Gandhi said.

One of the more unorthodox remedies being tested against the coronavirus in China is chloroquine.

The drug is intended to treat malaria, a condition caused by a parasite transmitted through a mosquito bite. A limited number of studies have found the drug to work against SARS. A study published this year in the journal Cell Research found the drug was effective in laboratory tests at keeping the virus from spreading by stopping its method of infecting cells.

The lack of certainty surrounding treatment for coronaviruses is partly due to the boom-and-bust nature of outbreaks — they can spread like wildfire and then disappear, as SARS did, said Gandhi. Although that is good for the public’s health, it also means scientists sometimes don’t have the means to thoroughly test a treatment that combats the specific virus in humans.

Dr. Anne Schuchat, principal deputy director of the Centers for Disease Control and Prevention, said in a press conference Tuesday that research on the virus causing the outbreak must not be “an afterthought. Because we don’t know how long some of these new emerging infections will persist.” 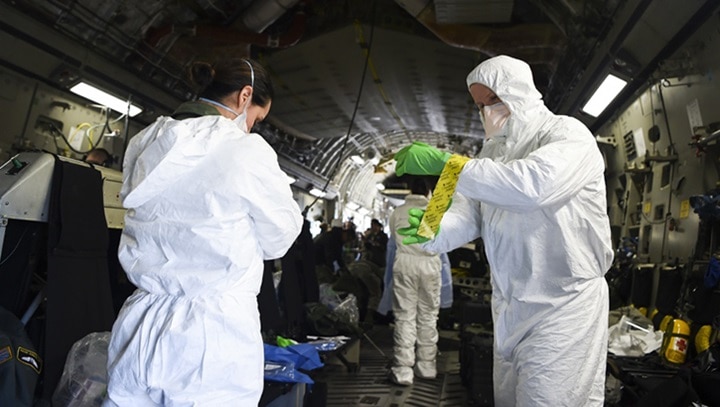 Airmen assist one another in donning their personal protective equipment, while on-board an Air Force C-17 Globemaster III during transportation isolation system training at Joint Base Charleston, South Carolina. Engineered and implemented after the Ebola virus outbreak in 2014, the TIS is an enclosure the Department of Defense can use to safely transport patients with diseases like novel coronavirus.

An outbreak of a new, potentially deadly disease can make physicians want to try everything possible to save their patients, said Perlman, the Iowa professor. But human trials are essential to understanding how a drug will work against a virus.

Experimental medicines that have not been vetted for safety through human trials may harm patients, he said. However, he added, using approved medications still leaves the door open to important questions, like how big the dosage should be.

“It’s just so hard when you’re on the front line and your patient is sick and you want to do something,” Perlman said.

Scientists treating coronavirus patients are pairing treatment with research to test the effectiveness of one unapproved drug: remdesivir. Made by Gilead Sciences, the broad-spectrum medication has been used in experiments to combat the Ebola virus, and tests in animals suggest it helps keep the SARS and MERS coronaviruses from replicating. But it is not yet clear if it will work against this virus.

The drug was outperformed by two other medicines during the 2018 Ebola outbreak in the Democratic Republic of the Congo. Researchers in China are now testing remdesivir in a randomized, controlled trial against the outbreak there.

The ramp-up in research and investments into outbreaks can wreak havoc on private drug companies, especially if the virus disappears at some point, as SARS did, said Dr. Jesse Goodman, a professor of medicine at Georgetown University in Washington, D.C. The federal government helps offset these costs through initiatives such as the Department of Health and Human Services’ Biomedical Advanced Research and Development Authority, which helps public-private partnerships develop drugs against public health threats.

Because of the volatility in outbreaks, “it becomes very daunting for companies to actually justify those investments” in targeted therapeutics, said Dr. Amesh Adalja, an infectious-disease physician and senior scholar at the Johns Hopkins Center for Health Security in Baltimore.

Goodman said one of the lessons learned from previous outbreaks is the need to invest more in the infrastructure needed to conduct clinical trials, like physicians, laboratories and systems that allow them to share samples. Looking ahead, the World Health Organization is trying to equip countries with the means to quickly begin researching a disease in the event of an outbreak.

“The time to prepare for clinical studies is not in the middle of an outbreak,” said Goodman, a former chief scientist for the Food and Drug Administration. “It’s beforehand.”

This story was first published Feb. 13, 2020, by Kaiser Health News (KHN) is a national health policy news service. It is an editorially independent program of the Henry J. Kaiser Family Foundation which is not affiliated with Kaiser Permanente.