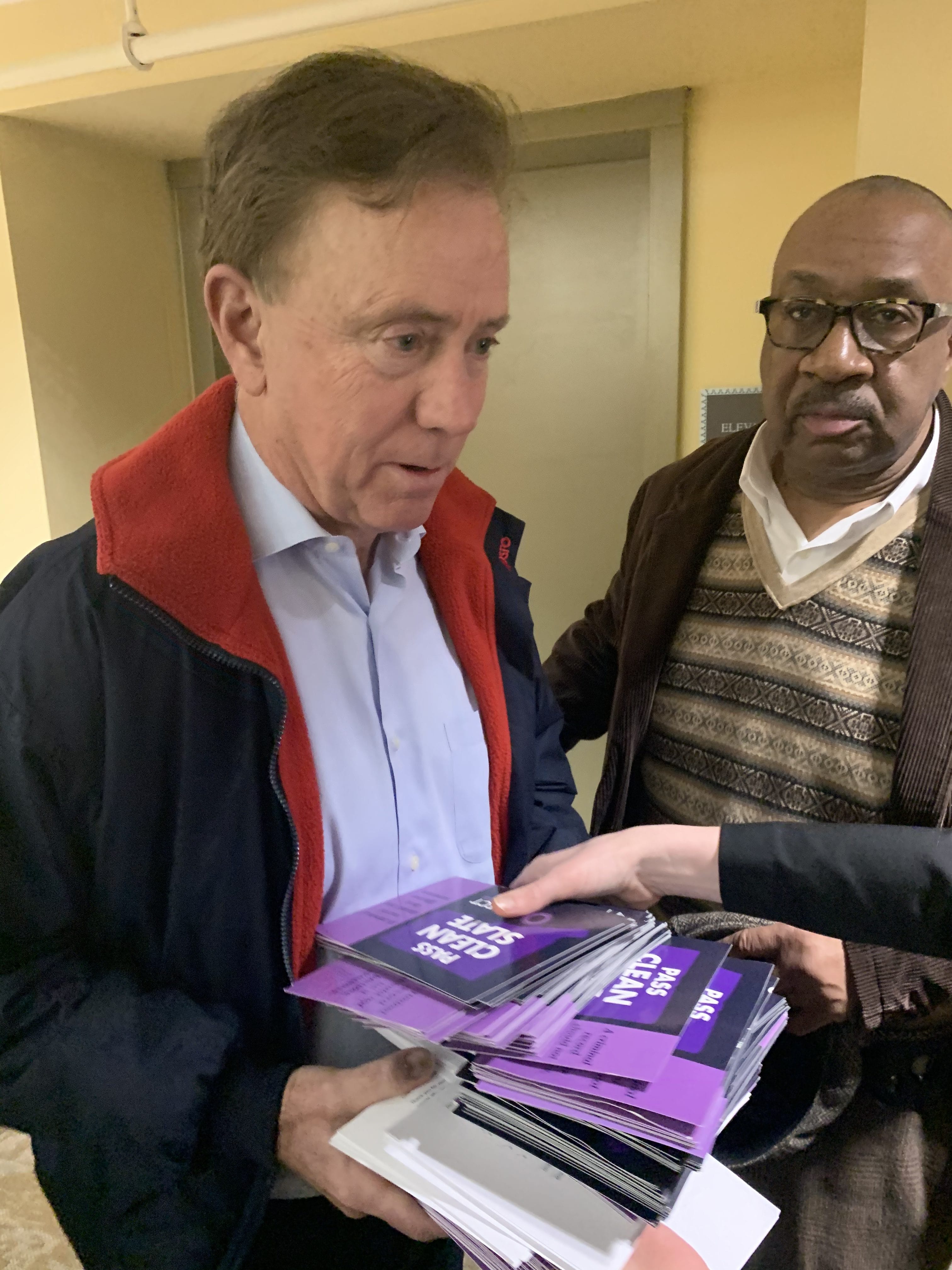 Gov. Ned Lamont is handed 805 letters showing support for a Clean Slate bill broader than the one he proposed to lawmakers. Photo courtesy of CONECT.

In a speech Wednesday, Gov. Ned Lamont expressed support for a proposed bill to expunge certain criminal records – a backing that advocates applauded, even as they said the proposal should be even broader.

“You served your time – you deserve that second chance. Whatever happened some years ago is not a lifetime sentence,” Lamont said at the Voices of Justice symposium in Hartford. “We need you. We need each and every one of those folks who are formerly incarcerated back in the game, able to work with respect and dignity.”

Lamont whisked in and out of the event after talking up his “Clean Slate” bill, a proposal that would automatically clear low-level misdemeanors if people don’t commit any other crimes for seven years. As the governor walked out the door, members of the Congregations Organized for a New Connecticut (CONECT) handed him 805 letters encouraging him to support a broader proposal that would automatically expunge felonies and shorten the time individuals must remain crime-free for their records to be cleared.

“Misdemeanors never hurt no one,” said Tammy King, a leader on the CONECT Clean Slate campaign. King said she was glad Lamont and his administration have joined the conversation on Clean Slate, and are willing to make Connecticut the third state — after Utah and Pennsylvania — to automatically clear or seal certain criminal records.

“You served your time – you deserve that second chance. Whatever happened some years ago is not a lifetime sentence.”

There’s broad public support for automatic expungement of criminal records. A poll recently released by the ACLU of Connecticut’s Smart Justice team showed the majority of voters are in favor of Clean Slate, with 60% of respondents indicating they backed such a measure if people remain crime-free for five years.

“When people reentering society have a full, complete chance at a fresh start, it makes everyone stronger and safer,” said Donald Rivers, a Smart Justice leader with the ACLU of Connecticut.

“When people reentering society have a full, complete chance at a fresh start, it makes everyone stronger and safer.”

“This isn’t just a view that is held on the left-hand side of politics,” said Katie Connolly, senior vice president of the Benenson Strategy Group, which conducted the poll. “This is a broad view that our criminal justice system really should attempt to rehabilitate people so that they can successfully reenter our communities.”

The survey showed there’s potential support beyond Lamont’s narrower proposal. About a third of those polled said people convicted of violent crimes are unlikely to change and will continue to threaten communities; almost two-thirds said those convicted of such a crime can turn their lives around if they get help.

Connolly, who conducts polls on a slew of political topics including health care, education and climate change, said such resounding support is uncommon.

Gus Marks-Hamilton, field organizer with the ACLU of Connecticut, applauded Lamont for joining the conversation on Clean Slate, but said the proposal must be more inclusive.

“We need to open it up to everybody in Connecticut who has a criminal record,” Marks-Hamilton said. “I hope the governor is going to be open to that.”

“I recognize there is disappointment in the room,” he said. “I hear you.”

Pelka said the governor’s proposal was a first step. Making Clean Slate into law would create the technology needed to automate the pardon process, he said. Legislators in future sessions can build on the policy in the coming years.

“I believe in the bill,” Pelka said. “I’m gonna fight as hard as I can for it to pass by the end of session.”

Reformers pushed for legislation last year that would have automatically pardoned more serious crimes. “It barely got out of the Judiciary Committee alive,” said Asti Jackson, an advocate with CONECT and postdoctoral fellow with Yale School of Medicine. “The felonies were ripped out of the bill.”

To build support for a more inclusive measure, said Melvin Medina, the public policy and advocacy director for the ACLU of Connecticut, advocates must put front and center the voices of those most affected: people with criminal records.

“There has never been a movement for liberation that has been led by the Chamber of Commerce,” Medina said. “At a certain point, the people that are impacted by this issue are fighting for things that might feel a little uncomfortable. [But] this issue is too important, too serious, to wait for people to feel comfortable.”