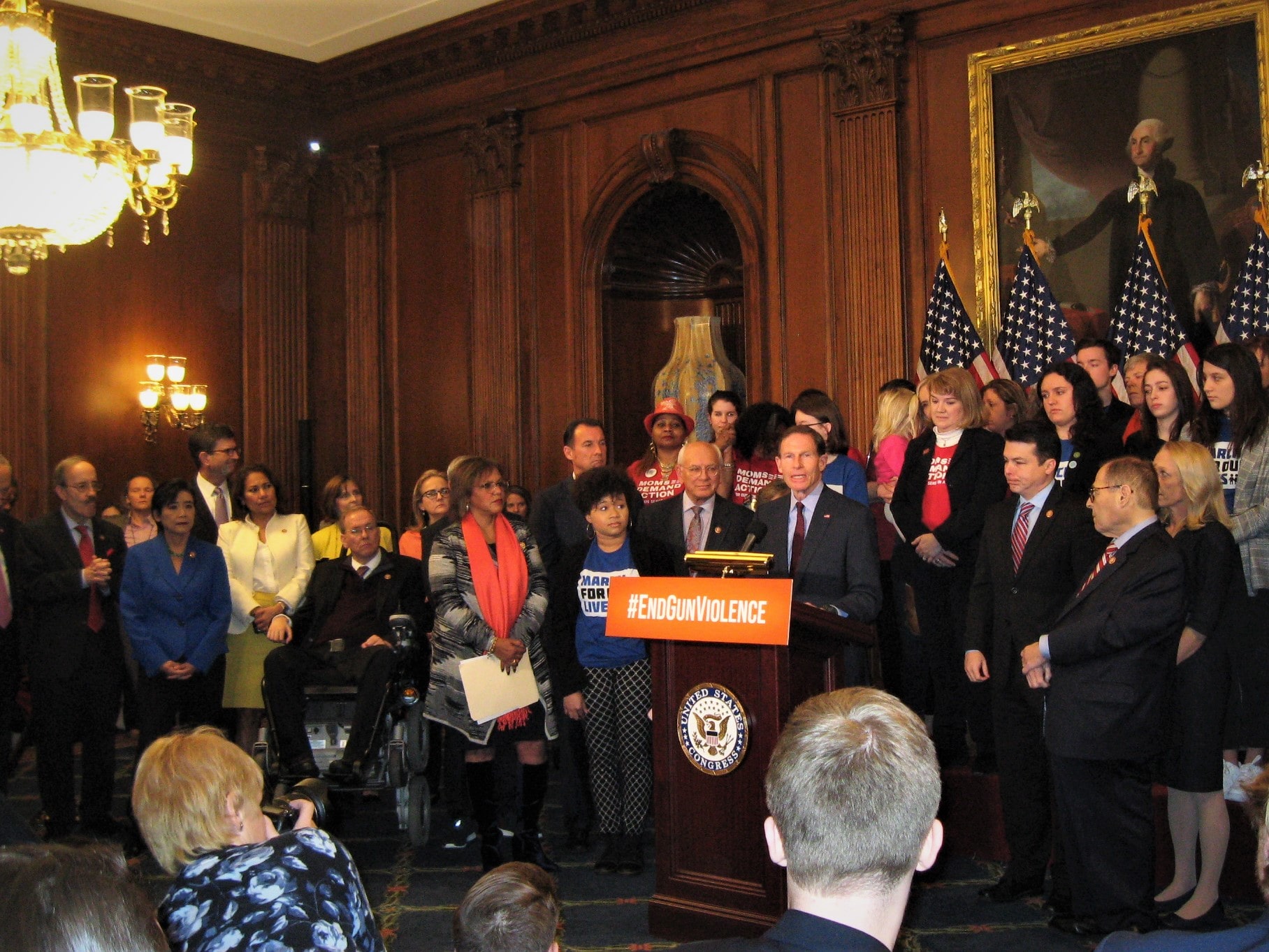 Washington – Sens. Richard Blumenthal and Chris Murphy joined Senate Minority Leader Charles Schumer Thursday in crossing the Capitol to join House members in condemning Congress’ continued failure to approve new gun laws, even as the number of mass shootings, and other gun violence, is on the rise.

The event was largely ceremonial. It marked the one-year anniversary of the House’s passage of two bills that would expand FBI background checks of prospective gun buyers and give authorities more time to conduct those background checks.

Since the House approved those gun bills a year ago, Democrats have villainized Senate Majority Leader Mitch McConnell, who has declared he will not allow a vote on any gun bill that doesn’t have the backing of President Donald Trump.

In an ornate room in the U.S. Capitol crowded with gun control advocates and family members of the victims of gun violence, House Speaker Nancy Pelosi, D-Calif., said McConnell, R-Ky., is guilty of “deadly obstruction.”

“Senator McConnell, I have a question. Why do you think your political survival is more important than the lives of our children?” Pelosi asked.

Blumenthal called the GOP leader “the grim reaper,” a name that McConnell has called himself when he vowed to block all progressive proposals on the Senate floor.

Schumer said “Leader McConnell is too busy taking his cue from the gun lobby” to do anything about gun violence. 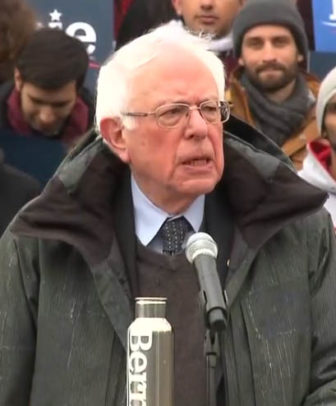 Sen. Bernie Sanders is on the defensive about his position on guns.

With Congress deadlocked, gun-control advocates are hopeful that the 2020 election will result in the election of a Democratic president and a more Democratic Congress and lead to the approval of gun legislation that was first introduced after the Sandy Hook massacre more than seven years ago.

Both Blumenthal and Murphy called efforts to approve new gun laws “a movement” that will be felt at the ballot box.

“They are showing us what America looks like and America demands action,” he said.

Blumenthal said “a lot has changed” since Congress last approved substantial gun legislation in the mid 1990s. “And this American movement will haunt our Republican colleagues,” the senator said.

In the last national elections in November of 2018, some Democrats won their offices, at least in part, because of their support for tougher gun laws.

Still, gun rights activists and the National Rifle Association, despite the organization’s recent woes, continue to have political clout.

When Democrats won control of Virginia’s state government for the first time in 26 years last year, they pledged to pass a number of standard gun control laws, including universal background checks and bans on military-style “assault weapons” and high-capacity ammunition magazines. That resulted in a backlash, with massive gun rights rallies, the killing of the proposed assault weapon ban and the watering down of other gun initiatives.

Even so, gun violence is expected to become an even larger issue on the campaign trail than it was two years ago, amplified perhaps by the candidacy of former New York Mayor Michael Bloomberg, founder of Everytown for Gun Safety, of which the grassroots Moms Demand Action is a volunteer wing.

At Tuesday night’s Democratic debate, Bloomberg blasted Sen. Bernie Sanders for the Vermont senator’s opposition to a key background checks bill in the 1990s and votes in the early 2000s blocking lawsuits against gun manufacturers — positions that were in sync with the NRA’s stance.

Sanders says his position on guns has evolved. He and other Democratic candidates for the White House pledge to support a universal background check bill and other gun proposals and competed on Tuesday’s debate stage to be the strongest supporter of new gun laws.

“The fact that the candidates are trying to create differences on guns is a sign of how politically powerful this issue is,” Murphy said of that debate.

Murphy said he’s been talking to White House staff about winning President Donald Trump’s  support for an expanded background check bill that is not as strong as the one House Democrats approved a year ago. Those talks were discontinued when Congress began impeachment proceedings against the president last year. 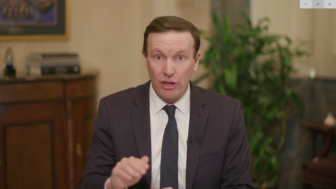 Murphy said the White House staffers he’s spoken to recently had not given him “a green light,” but they hadn’t flashed a “red light” either.

Yet Murphy said he did not believe there would be any movement on a background check bill before the November’s election.

Jackson Mittleman, who comes from Newtown and is now a freshman at Washington D.C.’s American University, was among the gun control activists at Thursday’s event at the U.S. Capitol.

“It’s frustrating that since I’ve been 13 years old, I’ve been coming here and nothing has been done,” he said.

Mittleman and other gun control advocates gathered at the U.S. Capitol the day after the nation’s latest mass shooting. On Wednesday, five people were shot and killed at a Molson Coors complex in Milwaukee, the site of this summer’s Democratic National Convention.  The 51-year-old shooter also died from self-inflicted wounds.